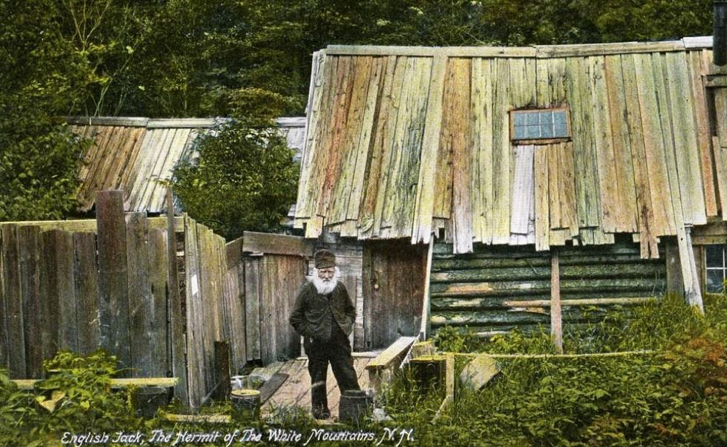 Postcard of English Jack in the White Mountains c. 1900’s

John Vials, also known as English Jack or the “Hermit of Crawford Notch”, was one of the most notable 19th century figures in the White Mountains. After a tumultuous life at sea and a vagabond lifestyle, Jack found his home at Crawford Notch in the 1870s and stayed until his death in 1912. Though it’s not known why he chose the Notch, he certainly established his presence there.

Jack is thought to have arrived in the White Mountains as one of the immigrant laborers hired to work on the Portland & Ogdensburg Railroad. He later built a house, “the ship,” from leftover timber he’d salvaged while working. Tourists were directed to his home by signs placed near the railroad. When receiving visitors, Jack would entertain them by selling homemade beer, showing off his aquarium where he kept trout for dining, and even consuming unusual creatures like frogs and snakes. He also sold postcards, souvenirs, and a book chronicling his remarkable, yet tragic life.

Born in London in 1824, Jack lost his family at the age of 12. As an orphan, he feared being sent to school or worse, taken by authorities. Homeless with only a single pound of gold, he decided to wander the waterfront looking for work. Despite his best efforts, he struggled to find anyone who’d hire him. His luck changed when a 5-year old girl named Mary came to ask for his help to find her father, Bill Simmonds. Jack was able to reunite the pair, and after learning about his situation, Bill and his wife decided to invite him on their ship. 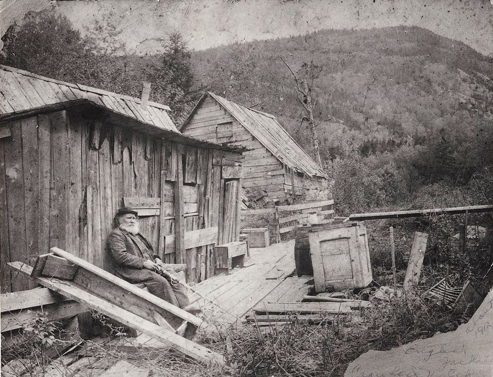 For eight years, Jack worked on Captain Simmonds’ ship, first as a cabin-boy and later as a sailor. Unfortunately, this stroke of luck wouldn’t last. During a voyage on the Indian Ocean, a hurricane wrecked the ship. Only 13 members of the 42-man crew were able to swim to safety on a deserted island. For weeks, the castaways survived on mussels, crabs, snakes, and whatever else they could find (perhaps one of the reasons Jack ate such unusual creatures at the Notch?) However, without proper sustenance, the men began to die off. Only four men remained alive. Before his death, the captain’s dying wish was for Jack to look after his wife and daughter. After burying Captain Simmonds, an American ship rescued the three survivors, but only Jack survived the journey back to England.

True to his word, Jack went in search of Mrs. Simmonds and Mary upon his return. Sadly, he learned that Mrs. Simmonds had passed away and that Mary was placed in a workhouse. Jack found Mary, removed her from the workhouse, and helped pay for her school tuition. He then set sail to Hong Kong to earn money, promising to bring back a wedding dress for Mary. When he arrived back in England 14 months later, he learned that Mary – his future bride – had died. Devastated, Jack joined the Royal Navy hoping for a “kind death.” He fought in many battles but survived them all. 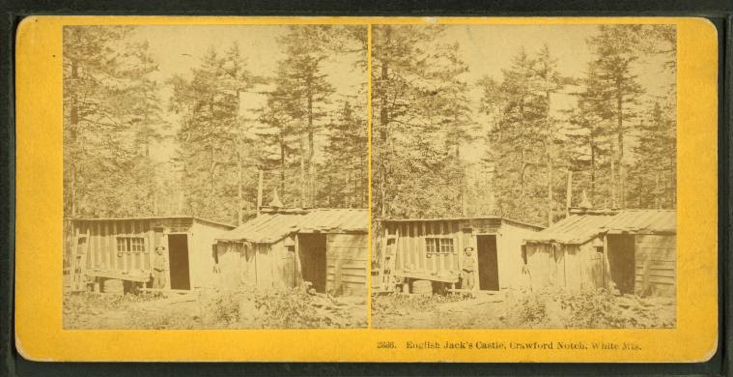 After serving in the Navy, Jack arrived in Crawford Notch (perhaps seeking a respite from his challenging life?) He stayed there until his death around the age of 90. To this day, he is one of the most memorable faces of the White Mountains and the tales of his resiliency have been passed on for generations.