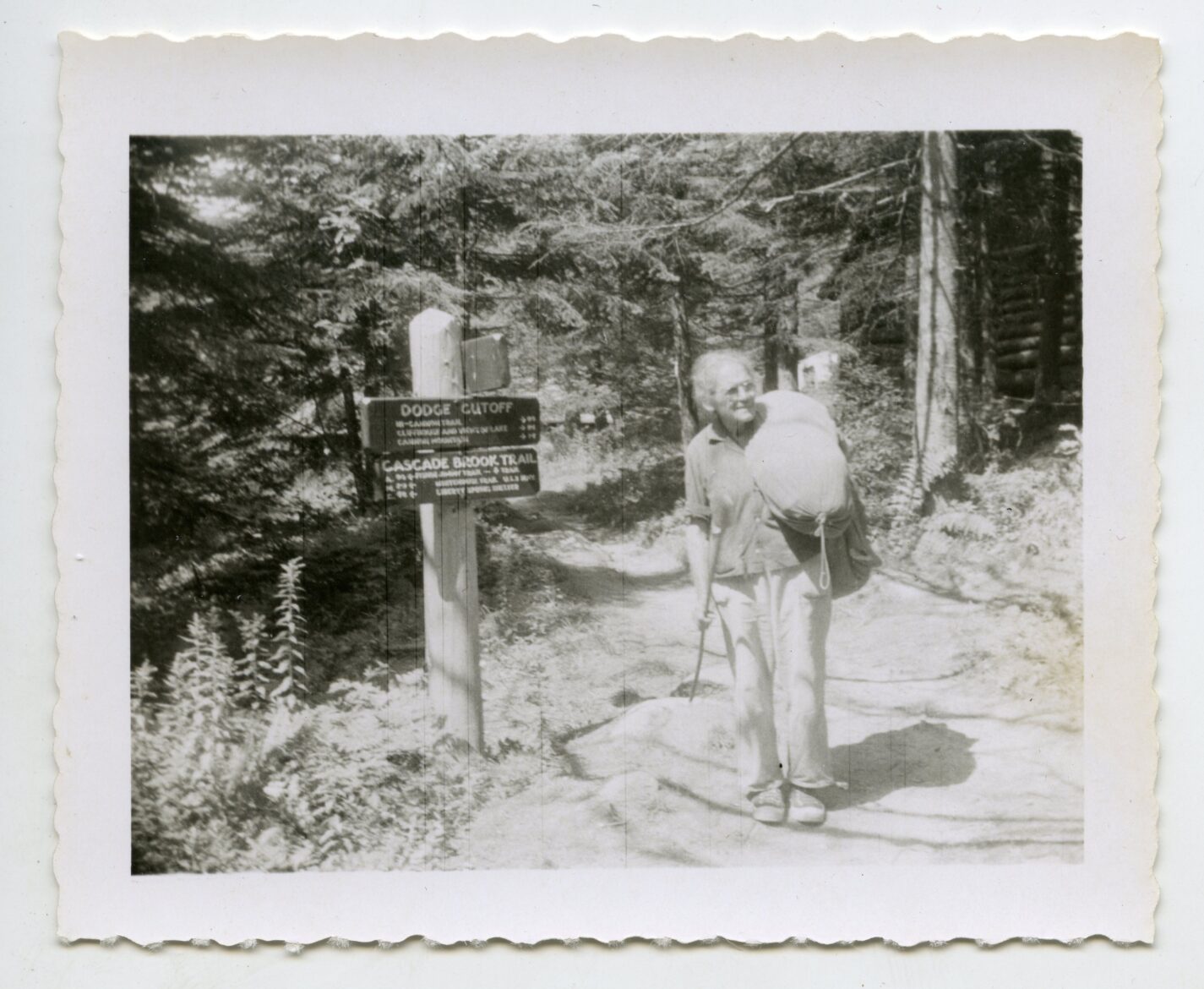 AMC LIBRARY & ARCHIVES; PHOTO BY PETER BRANDTEmma Gatewood at Lonesome Lake on her second A.T. trip in 1957.
In 1955, Emma “Grandma” Gatewood told her children that she was “going for a hike in the woods” – little did they know that this hike would be the entire 2,190-mile Appalachian Trail (A.T.), the longest hiking-only footpath in the world. Though hiking the entire A.T. is already an impressive feat, Gatewood’s trip was even more remarkable for a number of reasons; she was 67 years old at the time, a mother of 11, a grandmother of 23, and a survivor of more than 30 years of domestic abuse. When she summited Katahdin on September 25, 1955, she became the first woman ever to complete the entire A.T. alone in one season. A pioneer in long-distance hiking and a portrait of resilience, Gatewood broke barriers in the outdoors, sending the message that “if those men can do it, I can do it.”
Emma Rowena Caldwell was born on October 25, 1887 on a farm in Gallia County, Ohio. She had always lived a rather difficult life. Her father, Hugh Caldwell, a Civil War veteran, who had lost his leg after being wounded, was a heavy drinker and an avid gambler. As a child, she was often called on to do the strenuous manual labor that the farm required, and she shared just four beds with her 14 siblings in the family’s log cabin. At the age of 19, Emma married Perry Clayton Gatewood, a 26-year-old farmer who put her to work building fences and mixing cement. Sadly, he also physically abused her for more than 30 years.
Despite extensive media coverage of her A.T. hike in 1955, the story of Gatewood’s abuse wasn’t revealed until a newspaper reporter, Ben Montgomery, published her story in his book Grandma Gatewood’s Walk in 2014. Montgomery is Gatewood’s great-great-grandnephew and a journalist for the Tampa Bay Times. He spoke with Gatewood’s surviving children who shared with him journals and letters detailing Gatewood’s abuse. 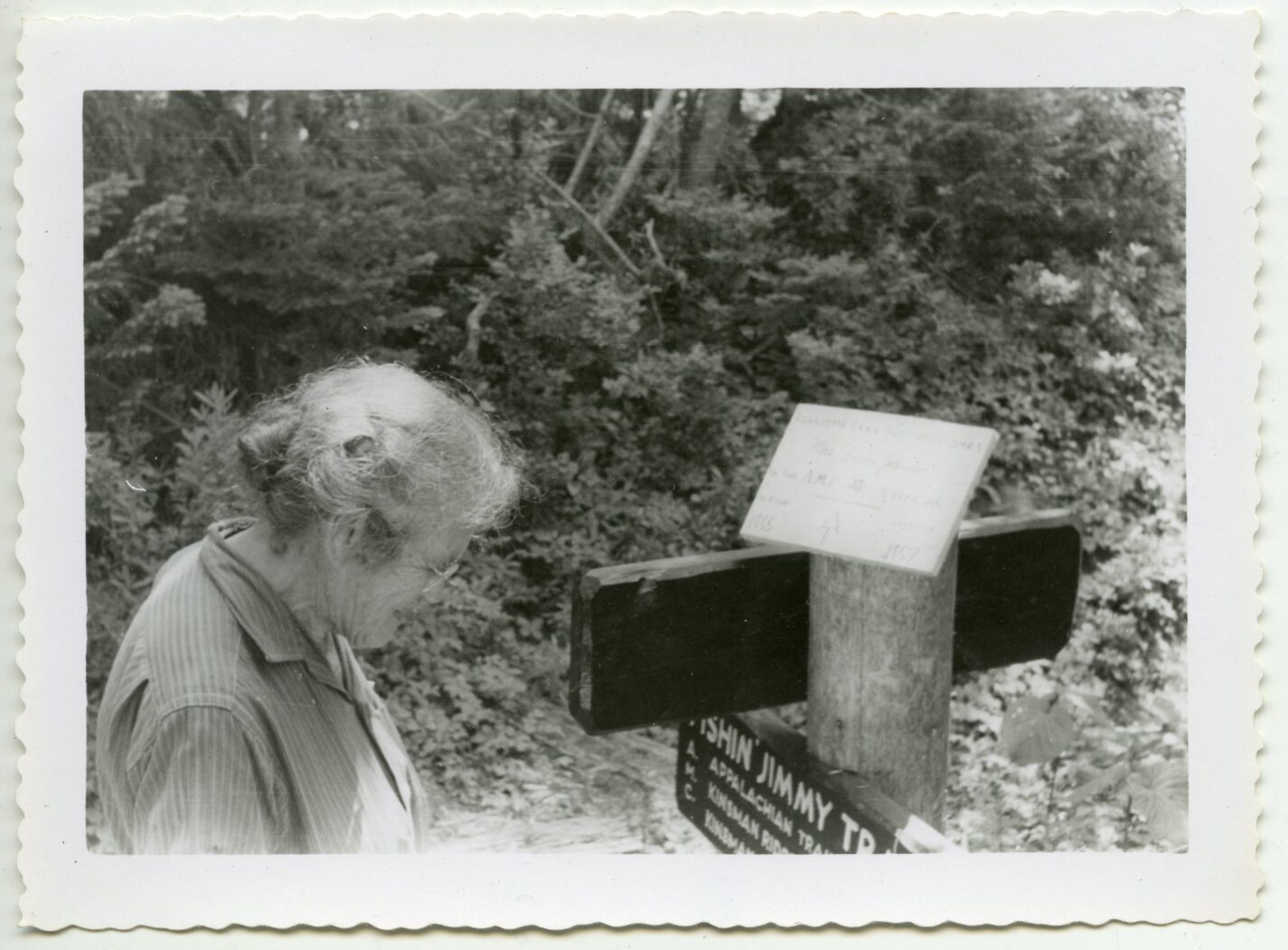 AMC LIBRARY & ARCHIVES; PHOTO BY PETER BRANDTEmma Gatewood at Lonesome Lake on her second A.T. trip in 1957.
As Montgomery writes, Gatewood and her husband were married just three months before “he drew blood.” He beat her throughout their marriage, nearly pummeling her to death several times. During one beating, she wrote that her husband had broken a broom over her head. These beatings continued until one day in 1939 when he broke her teeth, cracked one of her ribs, and nearly killed her. In response to this beating, Gatewood threw a sack of flour at him. When law-enforcement officials arrived, they arrested Emma instead of her husband. She spent a night in jail until the mayor of the small West Virginia town where they lived saw her battered face and took her to his home, under his protection. In 1940, after 33 years together, Gatewood managed to get a divorce from her husband – which was almost unheard of for women at the time. She raised the remaining three of her eleven children on her own.
In the 1950s, when all of her children were out of the house, Gatewood read a National Geographic article about Eric Shaffer, the first man to thru-hike the A.T. The fact that no woman had solo hiked the A.T. presented a challenge to her. In an obituary, Gatewood’s daughter stated that her mother had said: “If those men can do it, I can do it.” As someone who often sought refuge in the outdoors (she would frequently take walks in the woods behind her house when she was married to her abusive husband), it’s theorized that Gatewood sought out the Appalachian Trail, in part, as a sort of sanctuary. Montgomery writes: “I’m not sure she was walking toward something so much as she was walking away.”
Her first attempt at the A.T. happened in 1953. She started in Maine, but it was a complete failure. She broke her glasses, got lost, and was rescued by a few rangers who told her to go home. Two years later, Gatewood made the trek again, but this time, she started in Georgia to avoid the rangers who had discouraged her on her first trip. In neither instance did she tell her children where she was going – she just told them that she was going for a hike. According to Montgomery, she was worried that her kids would try to stop her.

AMC LIBRARY & ARCHIVESEmma Gatewood signed the Carter Notch Hut logbook on her second A.T. trip in 1957.
When Gatewood set out, she brought with her just a homemade denim bag with a blanket, a shower curtain, a cup, a canteen and bottle for water, a small pot, a spoon, a Swiss Army knife, a first-aid kit, pins, a flashlight, a piece of rope, a raincoat, a warm coat, a change of clothes, and her trusty Keds sneakers. She wore out seven pairs of Keds during the entirety of her trip. Remarkably, Gatewood did not bring a sleeping bag, a tent, a compass, or a map. Instead, she relied on the hospitality and kindness of strangers who lived along the trail for food and shelter. This was rather easy to do, because Gatewood became something of a local celebrity in the neighboring towns.
Media coverage of her trip was extensive with local reporters stopping to interview her. Her own children found out about her trip because a newspaper clipping had made its way to her hometown in Ohio. Despite this hospitality, the trip was not entirely comfortable. Gatewood often slept on front porch swings, under picnic benches, or on a bed of leaves. She ate canned Vienna sausages, raisins, nuts, chicken bouillon cubes, or greens she found on the trail. Gatewood was particularly resourceful and had learned which plants were edible before her trip. 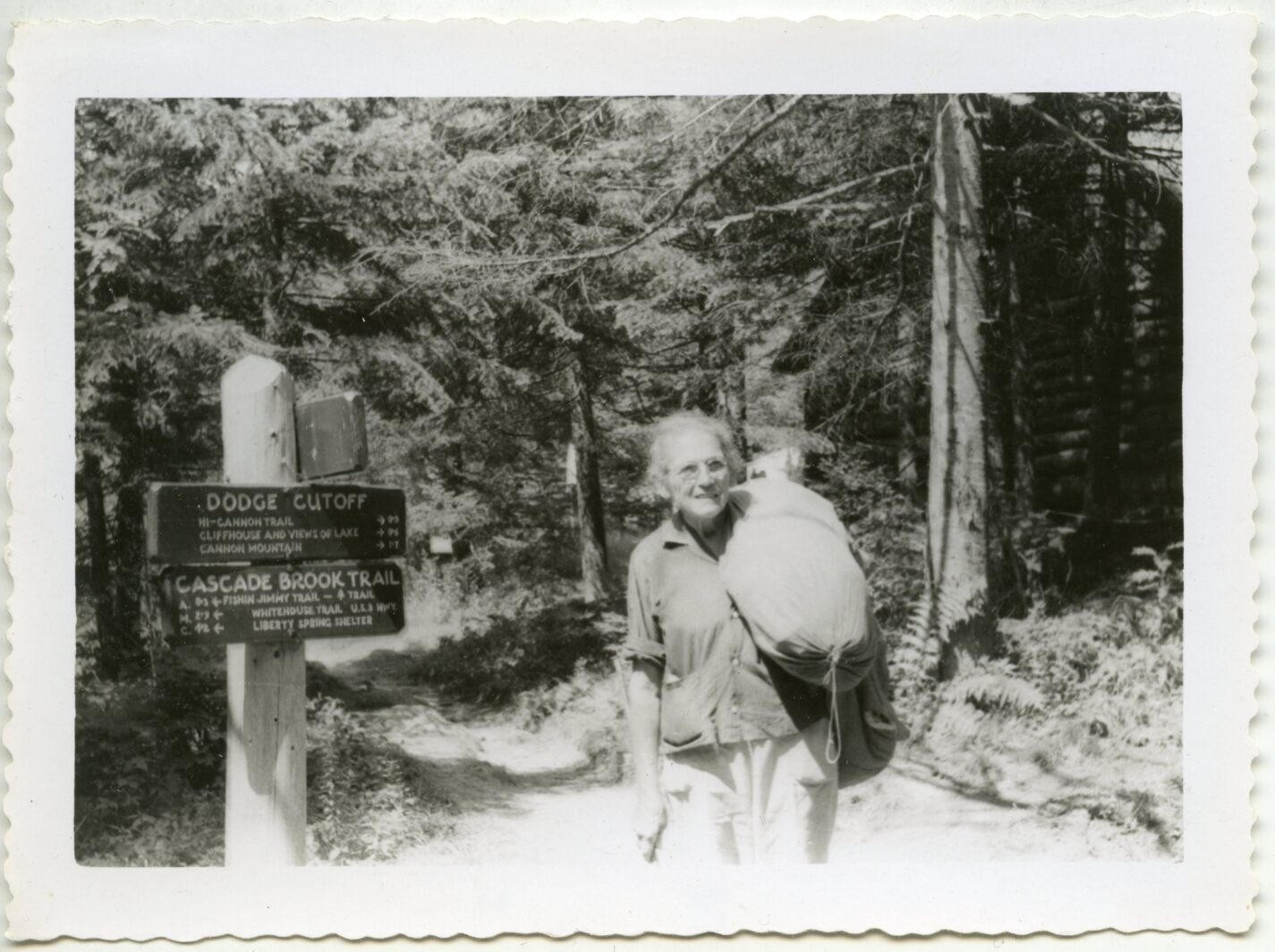 AMC LIBRARY & ARCHIVES; PHOTO BY PETER BRANDTEmma Gatewood at Lonesome Lake on her second A.T. trip in 1957.
The day before she climbed Katahdin to complete her hike, Gatewood fell and broke her glasses again, just as she had on her first attempt. She also bruised her face and sprained her ankle. In spite of this, on September 25, 1955 after 146 days of hiking, she persevered to complete the one last stretch and summited Katahdin, making history as the first woman to solo hike the A.T. in one season. Upon reaching the summit of Katahdin on that cold and windy day, she sang “America the Beautiful.” Given her age, limited gear, and the condition of the trail, the pace with which she hiked was noteworthy. She averaged 14 miles a day, often hiking from sunrise until she was absolutely spent. The members of at least one Boy Scout troop and their leaders reported that they were unable to keep up with her.

AMC LIBRARY & ARCHIVESEmma Gatewood signed the Lonesome Lake Hut logbook on her second A.T. trip in 1957.
But Gatewood didn’t stop there. Two years later, she returned to thru-hike the trail again, making her the first person to hike the full Appalachian Trail twice. In 1964, she hiked it a third time, but this time in sections.
Gatewood left a remarkable legacy on the Appalachian Trail. As a woman over 60, she introduced a new demographic to the sport of thru-hiking. Many women, after hearing about Gatewood’s trek, convinced themselves that if Grandma Gatewood could hike the Appalachian Trail, so could they. In the years since Gatewood’s accomplishment, the A.T. has increasingly become more inclusive of women. According to the Appalachian Trail Conservancy, in the trail’s first several decades, women represented only about 15% of those who completed the entire A.T. However, by 2018, women represented a third of all thru-hikers. For Gatewood, the decision to hike the A.T. was rather simple – she ignored any barriers and anyone who told her she wouldn’t be able to do it. When one reporter asked why she wanted to hike the A.T., Gatewood stated: “Because I wanted to.”