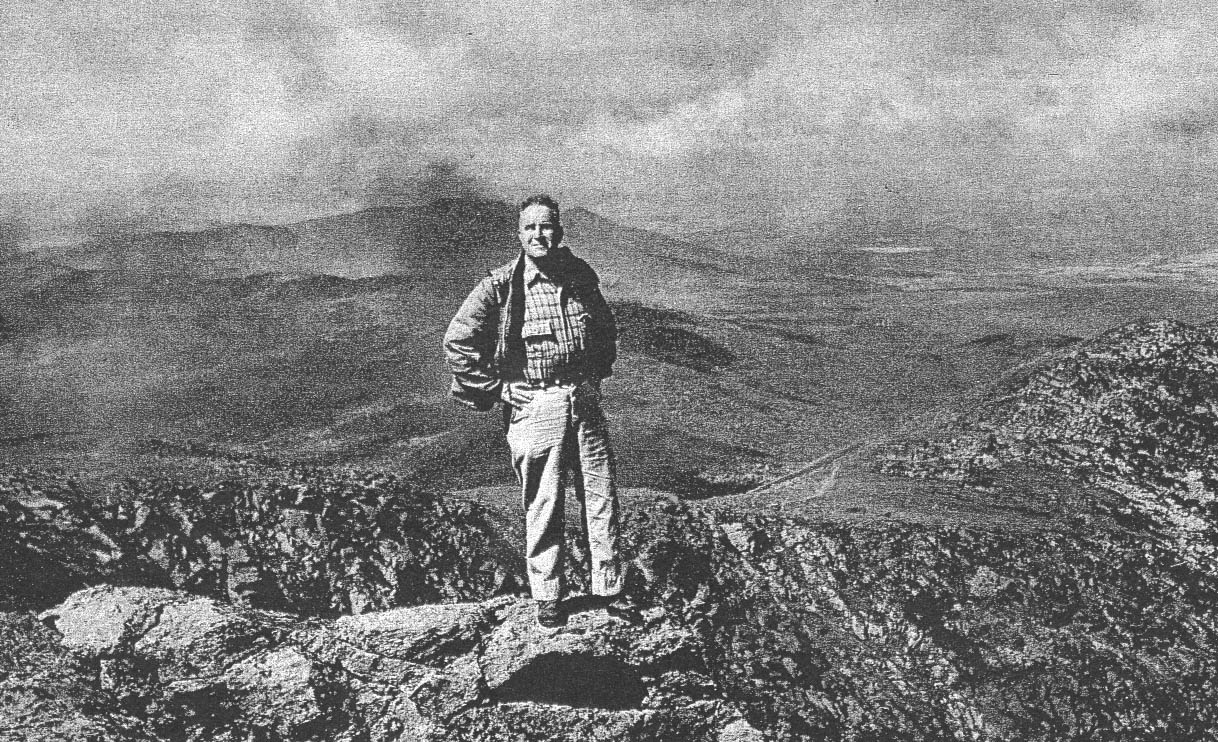 Joe Dodge didn’t consider himself a writer. But his style was direct and economical. In Appalachia, Joe recounted his trip to Pinkham Notch to accept the job which made so much difference in the rest of his life.

“It was a real expedition to the White Hills in those days over the road as there was no paved highway north of Rochester, except through the center of North Conway…”

On June 9, 1922 I bid my folks adieu in Manchester-by-the-Sea, Massachusetts, and climbed in the only piece of rolling stock the club owned at the time, a Model T Ford truck, along with “Red” MacGregor, Johnnie White and Ed Nelson. It was a real expedition to the White Hills in those days over the road as there was no paved highway north of Rochester, except through the center of North Conway, and we had the usual tire trouble that hot June day and finally arrived late in the day, just ahead of a thunder shower, at Pinkham Notch Camp, where I was to be the hutmaster that summer. 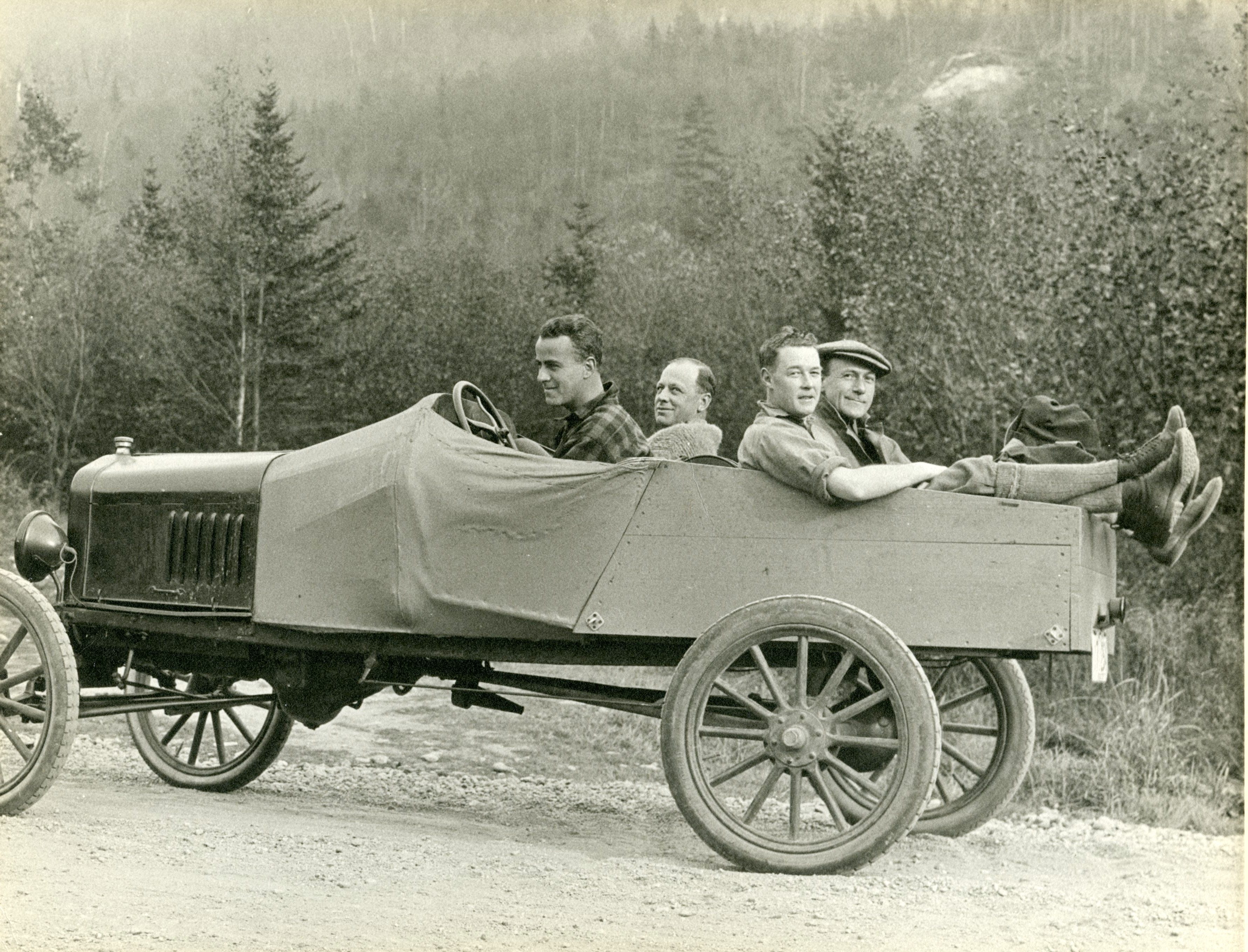 I had had a variety of experiences prior to appealing to Red Mac for a job in the hills, but circumstances at home dictated that I should look to the hills for an outlet for my energy, and apparently I found my niche in the pioneering aspect of living in the hills where native ability can manifest itself.

“I found my niche in the pioneering aspect of living in the hills where native ability can manifest itself.”

The two log buildings were completed at Pinkham Notch during the summer of 1920 and Bill Loker was the first hutmaster and I was the second. When I looked over the interior that first June day (in 1922) it looked pretty bare and lacked a lot of equipment that could make for better operation and I immediately started building shelves and benches from bits of lumber left over from the construction days. I think “Red Mac” was impressed with the simple conveniences added and gave me a freer hand to carry on. 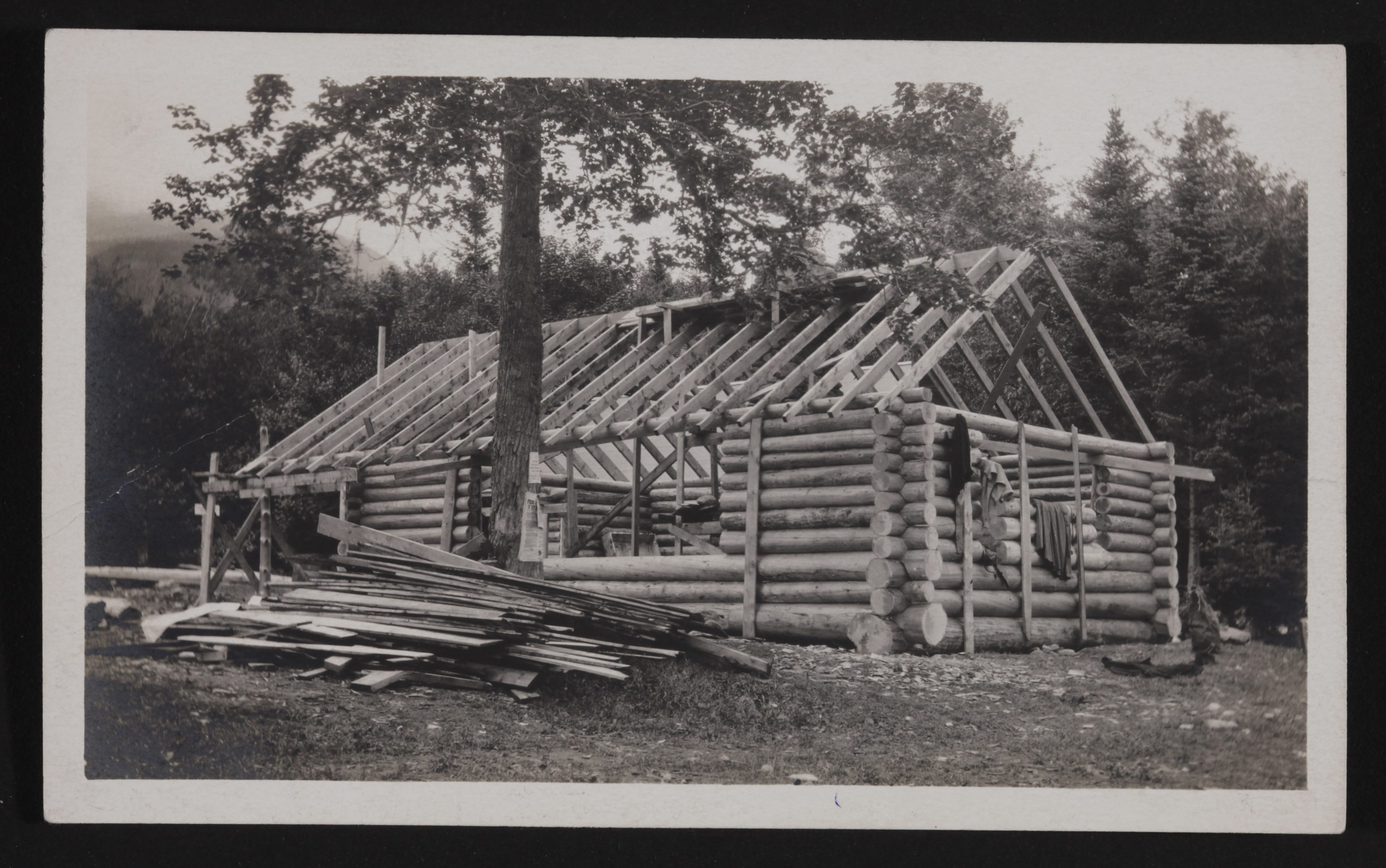 This was encouraging and many small changes were made between the duty of killing the excessive numbers of hedgehogs that bothered us mainly in the evening and at night. The great numbers of porcupines caused Ed Nelson, the truck driver that summer, to coin a new name that has stuck thru the years, PORKY GULCH, replacing Pinkham Notch, even on incoming correspondence.

“I think “Red Mac” was impressed with the simple conveniences added and gave me a freer hand to carry on.”

That summer “Red Mac” and I built new facilities for the men and women out in the woods and to this day these two-holers still stand but have been moved several times to accommodate the expansions of the camp and chemical tanks have been added. Next I saw many guests washing at a so-called wash stand without protection from the elements and so I suggested to Mac to allow me to build a wooden canopy over the washing place. This little addition was much appreciated by the guests as they at least were not out in the rain making their toilet. 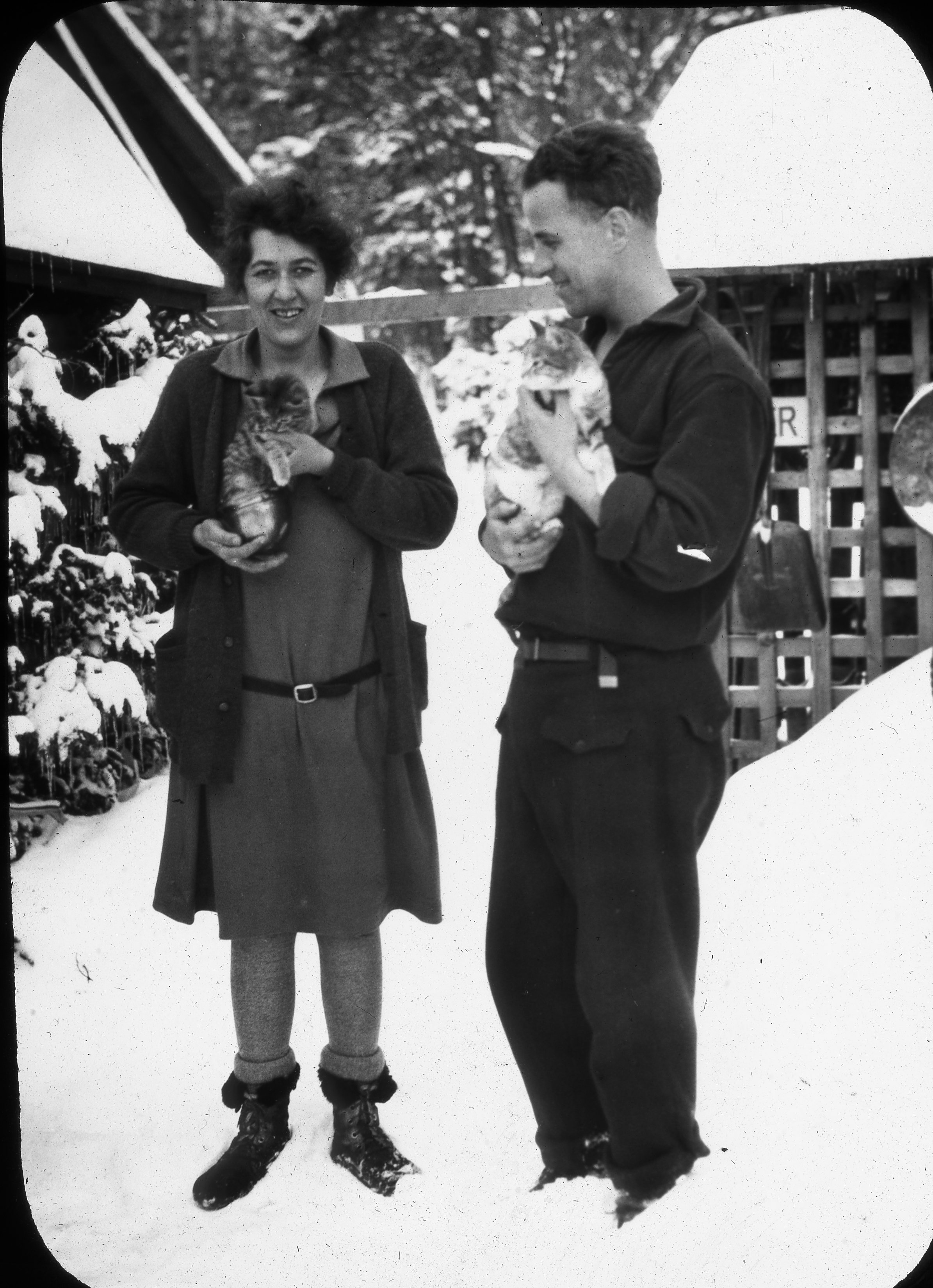 In the early times, the hutmaster was host, accountant and cook: I took a great pride in my cooking and one of my specialties was baking-powder biscuits and blueberry muffins along with apple pan-dowdy. In those days we cooked entirely with wood at Pinkham and this was another chore to work up wood ahead to be sure of good dry and hard wood for the hot fires we needed.

“I took a great pride in my cooking and one of my specialties was baking-powder biscuits and blueberry muffins along with apple pan-dowdy.”

On the range the boys had various sorts of kerosene stoves that gave off mean odors and were a constant nuisance. We had a cast-off kerosene stove at Pinkham that I threw out and got on nicely with the hard woods, mainly beech, killed by the hundreds of hedge-hogs that girdled these trees about three or four feet from the ground, apparently having been done in the winter on the snows. Speaking of those critters, many a night did we kill a dozen, until it came to be a problem of burial. We clipped the noses for the 25¢ bounty which was put in our meagre kitty of those days. 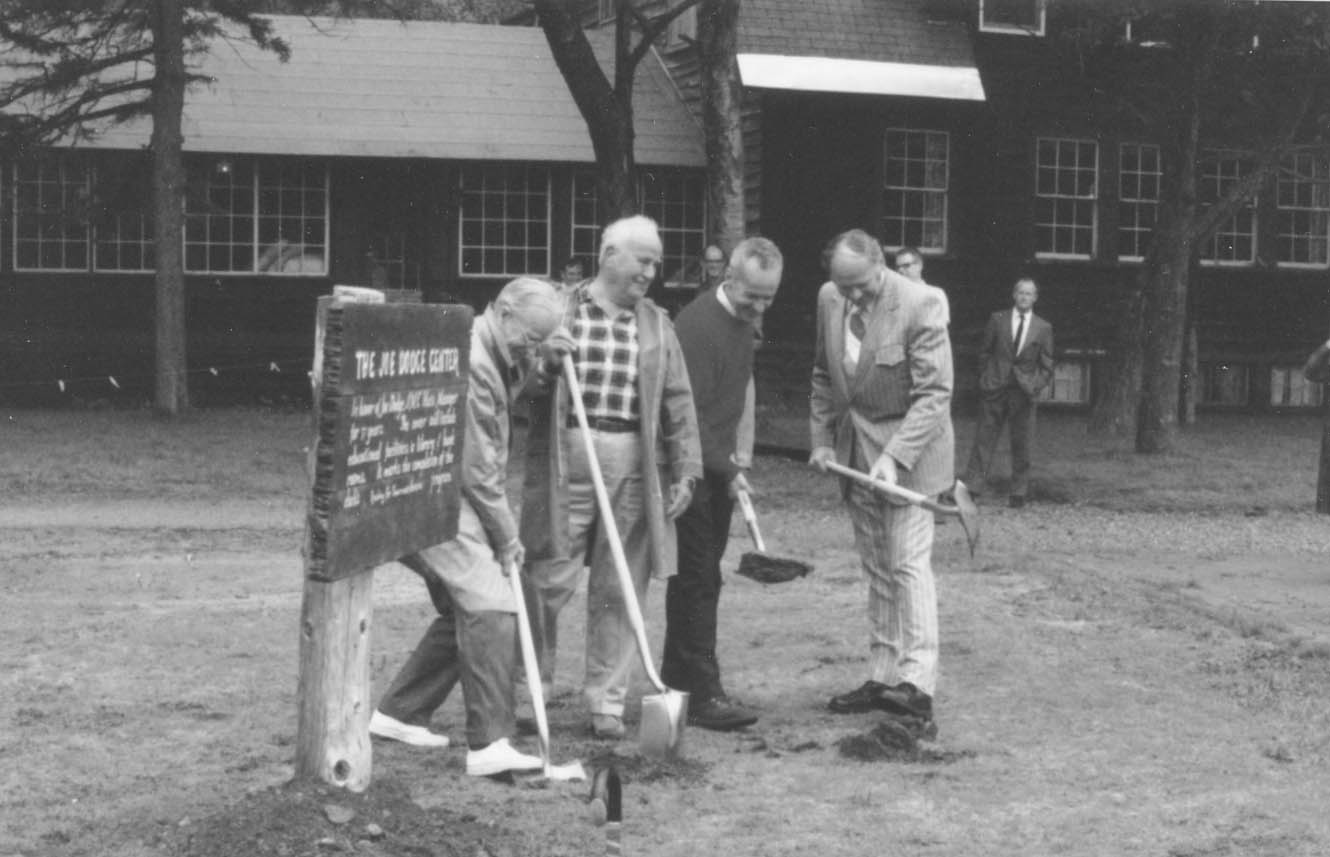 Ground breaking for the new Joe Dodge Center in Pinkham Notch (Joe 2nd from left) May 31, 1972