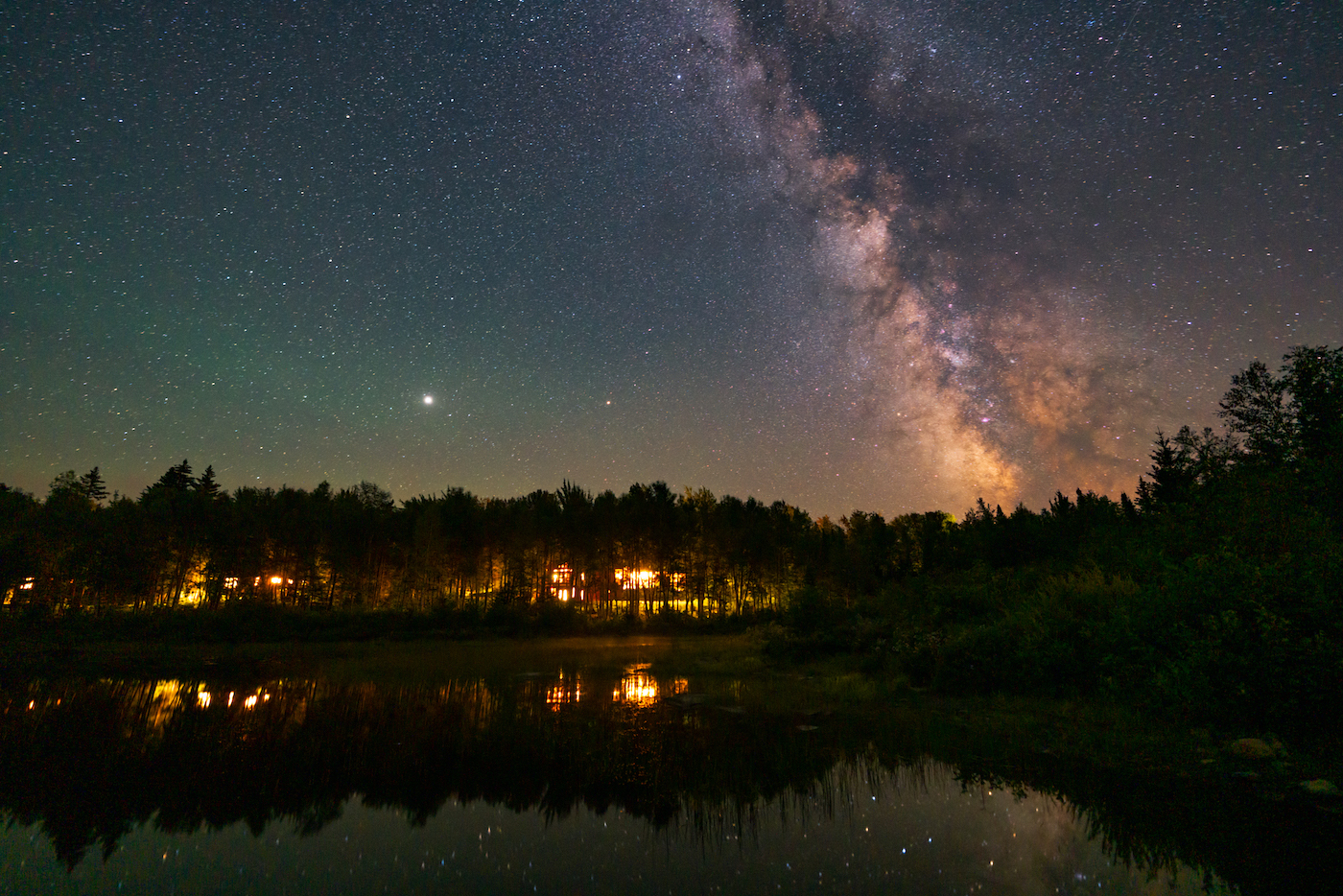 Join the Appalachian Mountain Club in celebrating the recent designation of AMC’s Maine Woods property as an International Dark Sky Park! Our virtual event will take place on November 11th at 6:30pm EST.

The AMC Maine Woods International Dark Sky Park lies at the edge of the North Maine Woods, an expanse of more than 14,000 square kilometers of largely uninhabited forest land that stretches from Monson, Maine, to the border of Canada. This region is one of the darkest places remaining on the East Coast and has also been identified as an area of exceptionally high habitat connectivity and climate change resilience.

Register for this virtual celebration here.

Attendance is limited, so please register early. All registrants will be automatically entered to win dark sky inspired prizes. One prize winner will receive a free one-night stay for two, at their choice of AMC Maine Wilderness Lodge. Other prizes include dark sky stickers, postcards, and hats.

Isaac Crabtree has been teaching science at Greenville High School for the past 15 years, and while he has always been interested in taking pictures, it wasn’t until he flew a drone for the first time in 2017 that his interest in technology and the outdoors were combined into a passion for photography in Maine. Shortly after he began to dabble in astrophotography. While the focus of his photography is aerial, living in some of the darkest skies on the East Coast provide him with ample opportunity to develop his skills in shooting the night sky.

Dr. Heidi B. Hammel received her undergraduate degree from MIT and her Ph.D. from the University of Hawaii. She is currently the Vice President for Science at AURA, a consortium that operates large astronomical observatories, including the Hubble Space Telescope, Gemini Observatory, and many more. Dr. Hammel primarily studies outer planets; she served on the imaging team for the Voyager 2 Neptune encounter and has studied Uranus and Neptune extensively with Hubble and other facilities. She is an Interdisciplinary Scientist for NASA’s James Webb Space Telescope and plans to use her guaranteed observing time to study a diverse array of Solar System targets including the outer planets. She has been recognized for both her science and her work in public outreach, including the Sagan Medal and the San Francisco Exploratorium’s Public Understanding of Science Award. Last year she received the American Astronomical Society’s Masursky Award for outstanding service to planetary science and exploration. Asteroid “1981 EC20” was renamed 3530 Hammel in her honor.

Douglas Arion, PhD is the Executive Director of Mountains of Stars and Professor Emeritus of Physics and Astronomy at Carthage College. He is deeply concerned about human impact on the environment and founded Mountains of Stars to change attitudes and actions of the public by creating ‘environmental awareness from a cosmic perspective’.  He co-founded Galileoscope, a worldwide project to provide high-quality, low-cost telescopes for worldwide promotion of science education and outreach. He is a Lifetime member of the International Dark Sky Association (IDA) and the Appalachian Mountain Club (AMC), a Fellow of the American Physical Society, and has received the Distinguished Service Award from Sigma Pi Sigma (the physics honorary society), the Volunteer Leadership Award from the AMC, and the Dark Sky Defender award from the IDA. He serves on the dark sky preservation commissions of both the American Astronomical Society and International Astronomical Union (IAU) and is an IAU International Dark Sky Ambassador. He was a major contributor and one of the leaders of the effort to create the AMC Maine Woods International Dark Sky Park.

Isaac Crabtree: Astrophotography in the North Woods of Maine

Dr. Heidi Hammel: Glimmers of Light in the Darkest Skies

Our dark skies traditionally have connected humanity to the heavens: whether for pure wonder or for mundane tasks such as timing crop planting, we have turned our eyes to the skies.  Dr. Hammel will share her sky-watching journey from childhood constellation naming to her role today as a leading scientist for NASA’s newest Great Observatory, the James Webb Space Telescope. The power of dark skies will echo throughout her presentation and inspire us to engage with our Maine dark skies with wonder and joy.

Creating an Int’l Dark Sky Park isn’t just about protecting the dark skies of Maine: It’s part of a larger effort to reduce unneeded and excessive lighting, which affects human health and safety, wastes energy, and creates pollution, and negatively affects a plethora of species, including plants, birds, and insects. What are these effects, how do we reduce or eliminate them, and how does the AMC Maine Woods International Dark Sky Park play a critical role in this process?