Glen Onoko Closure: Why Officials Shut Down One of Pennsylvania’s Most Popular Hiking Trails 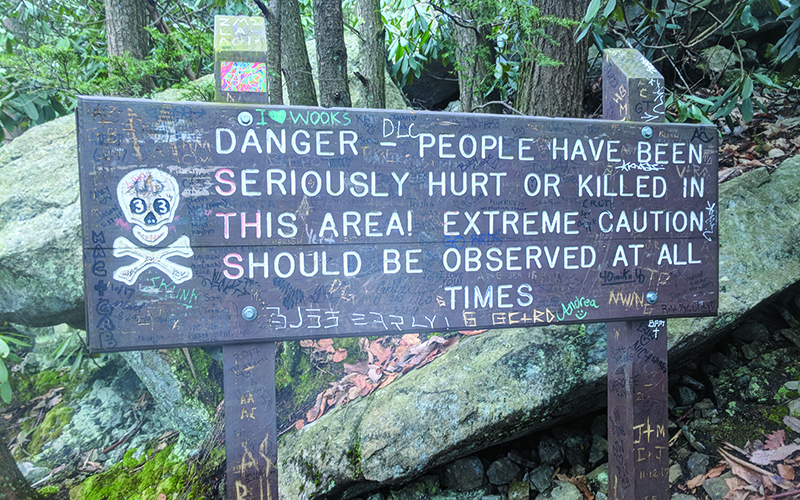 Mark ZakutanskyOfficials say too many hikers ignored signs like this one, venturing off-trail near rocky ledges—risking serious injury and death and leading to the Glen Onoko closure.

The trail to Pennsylvania’s Glen Onoko Falls became a victim of its own success.

Widely considered one of the best waterfall hikes in the East, this short, steep trail leading to a series of falls—including the namesake Glen Onoko—is now closed to visitors. The Pennsylvania Game Commission, which manages the land on which the trail is located, closed access on May 1, 2019, over safety concerns and repeated rescues. Visitors who ignore the directive can be fined for trespassing.

Several outdoor groups, including AMC, decry the decision and call for its reversal. The state has given no indication if, or when, the popular trail will reopen.

“Closing public lands to public use should be a matter of last resort, and it is not clear that all other options had been pursued before the closure was implemented,” says Mark Zakutansky, AMC’s director of conservation policy engagement. “Glen Onoko should be reopened as soon as possible.”

Near the tourist town of Jim Thorpe, Glen Onoko’s ample trailhead parking attracted thousands of visitors each year. Its proximity, popularity, and ease of access caused some to underestimate the challenge of the hike, says Eric Pavlak, a volunteer with AMC’s Delaware Valley Chapter. Hikers, some wearing flip-flops, would take to the trails and find themselves trying to navigate rocks made slick by mist, Pavlak says.

On a route estimated to take less than an hour, Glen Onoko visitors were rewarded with four waterfalls, including the eponymous highest, plus another that, thanks to a natural grotto, hikers could walk behind. But poor trail conditions, combined with hikers venturing too close to steep dropoffs, led to numerous accidents, often involving complicated and costly rescue efforts. Last spring, The Morning Call, a local newspaper, tallied 14 medical emergency events involving 18 Glen Onoko visitors since 2008—including seven deaths.

Mike Beahm, a land management supervisor with the Pennsylvania Game Commission, says the agency installed multiple warning signs and ropes over the past couple of decades to keep people back from hazardous drops, but the serious accidents continued. Eventually, Beahm says, the risk outweighed the benefits, with first responders reporting difficulty in reaching rescuees, the complexity of some rescue efforts, and the labor needed to carry victims down steep embankments.

“We are the landowner, and we have a responsibility to try and address hazards,” he says. “We had to take this step to protect the public.”

AMC, among other hiking groups, says one potential solution would be a land swap between the Game Commission and the state’s Department of Conservation and Natural Resources (DCNR), which manages the adjacent Lehigh Gorge State Park. Zakutansky says such an arrangement would allow DCNR to bring in staff experienced at designing and maintaining trails. Beahm says the Game Commission is open to a potential land transfer, but that must happen through legislation passed in the Pennsylvania General Assembly. To date, no such legislation authorizing the land transfer has been introduced.

If a land deal were to be approved, the next step would be to identify funding in DCNR’s budget for maintenance and other safety considerations, including the construction of an improved trail to the falls, says Mike Helbing, the founder of Metrotrails, another hiking group in Pennsylvania and New Jersey. “The most famous waterfall hike in Pennsylvania is Ricketts Glen. There are more waterfalls there, but the trails are professionally maintained,” Helbing says. “The same can be done here.”

Answers to Your Questions Related to the 2021 AMC Huts Season