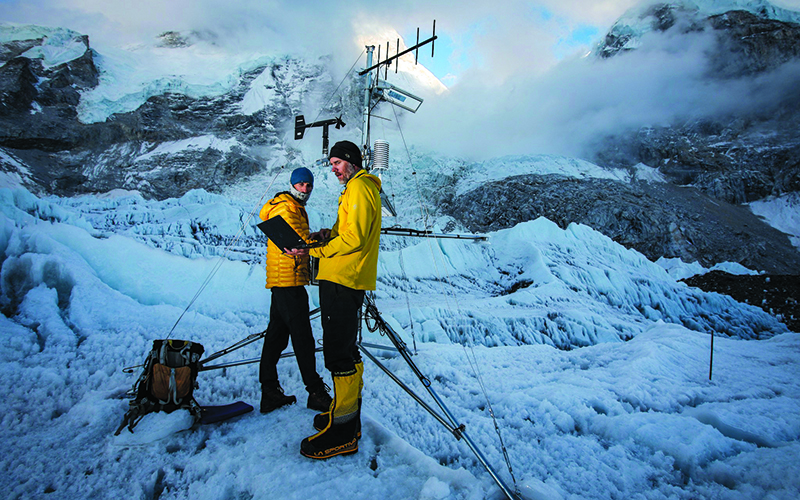 National GeographicTom Matthews (left) and Baker Perry, members of the National Geographic and Rolex Perpetual Planet Extreme Expedition to Mount Everest, work on an automated weather station in Nepal after a test run in New Hampshire.

Of all the places Dr. Baker Perry, a professor of geography at Appalachian State University, visited while training for an expedition to Nepal’s Mount Everest, dangling from a weather station in a winter storm at 4,000 feet was not something he had planned.

“It was wicked up there,” Perry says of his experience on [the Northeast slope of] New Hampshire’s own Mount Washington. “Heavy winds, near-zero visibility. Still, good exercise and a great place to test the equipment!”

Before Perry and a team of National Geographic engineers, scientists, and climbers attempted to install a weather station within Everest’s so-called Death Zone, they stopped by the iconic White Mountain peak—and, some say, the site of the world’s worst weather—for a dry run. On February 15, 2019, Perry, along with members of the Mount Washington Observatory and Campbell Scientific, an electronics manufacturer out of Utah, spent several hours off the side of the auto road, just above treeline, setting up and testing a 7-foot-tall, 110-pound, specialized weather station. If the station could withstand Mount Washington’s winter fury, five stations like it would be installed on Everest, including one just below the mountain’s deadly summit.

As usual, Washington gave the visitors its worst. Keith Garrett, Mount Washington Observatory’s information systems administrator, says the original plan was to erect the test station at the summit, but blowing wind and harsh snow forced the scientists to move their experiment about 2,000 feet down the mountain. Even so, working in blizzardlike conditions of 0 degrees and 50- to 70-mile-per-hour winds while outfitted in mountaineering gear tough enough for the harshest cold, the team had to drill holes in ice-covered rocks and set up a series of guylines to brace against the wind. Then, putting his own body on the line, Perry climbed onto the device to see if it would hold.

“I really wanted to hang on it and shake it as violently as I could,” he says. “I did pullups on it, and we tried to identify weak points that we could fix.”

Once Garrett and Perry felt the station was secure, they switched the contraption on and spent about a half-hour collecting data: relative humidity, wind speed and direction, and barometric pressure. It all worked perfectly. The station was then dismantled and readied for its trip to Nepal.

Three months later, on May 23, Perry, along with members of the National Geographic Society’s Perpetual Planet Extreme Expedition, found themselves relying on their Mount Washington training to set up a similar weather station on the Balcony, a route along Everest’s South Col. Like the test on Washington, the team’s original goal was to erect the station at Everest’s summit, but dangerous delays forced them to change their plans.

“Our brains don’t work well up there,” Perry says, referring to the area above 26,000 feet in elevation that climbers call the Death Zone. “But along with the Sherpa members of our team, whom we trained, we set the station up just like we had in New Hampshire.”

At 27,657 feet, the Everest weather station has been broadcasting data since May and is the highest of its kind on Earth. The team also installed four other stations at lower altitudes in the Everest region and collected and brought back ice core samples from several areas around the glacier, including near the weather station—representing the highest ice collection ever recorded. Core samples allow scientists to study ice accumulation, air temperature, and air chemistry over the history of an ice sheet. The tube-like samples from Everest, totaling nearly 10 meters of core ice, will give scientists a full picture of the glacier’s age and its melt rates.

“We understand a lot about the atmosphere, but to put up a weather station and monitor it that high is something new,” says Paul Mayewski, director of the Climate Change Institute at the University of Maine and the expedition’s scientific leader. “Understanding how much of that air interacts with the lower air is important in determining things like moisture and pollutants. We have a better way to predict weather at lower levels once we understand higher levels.”