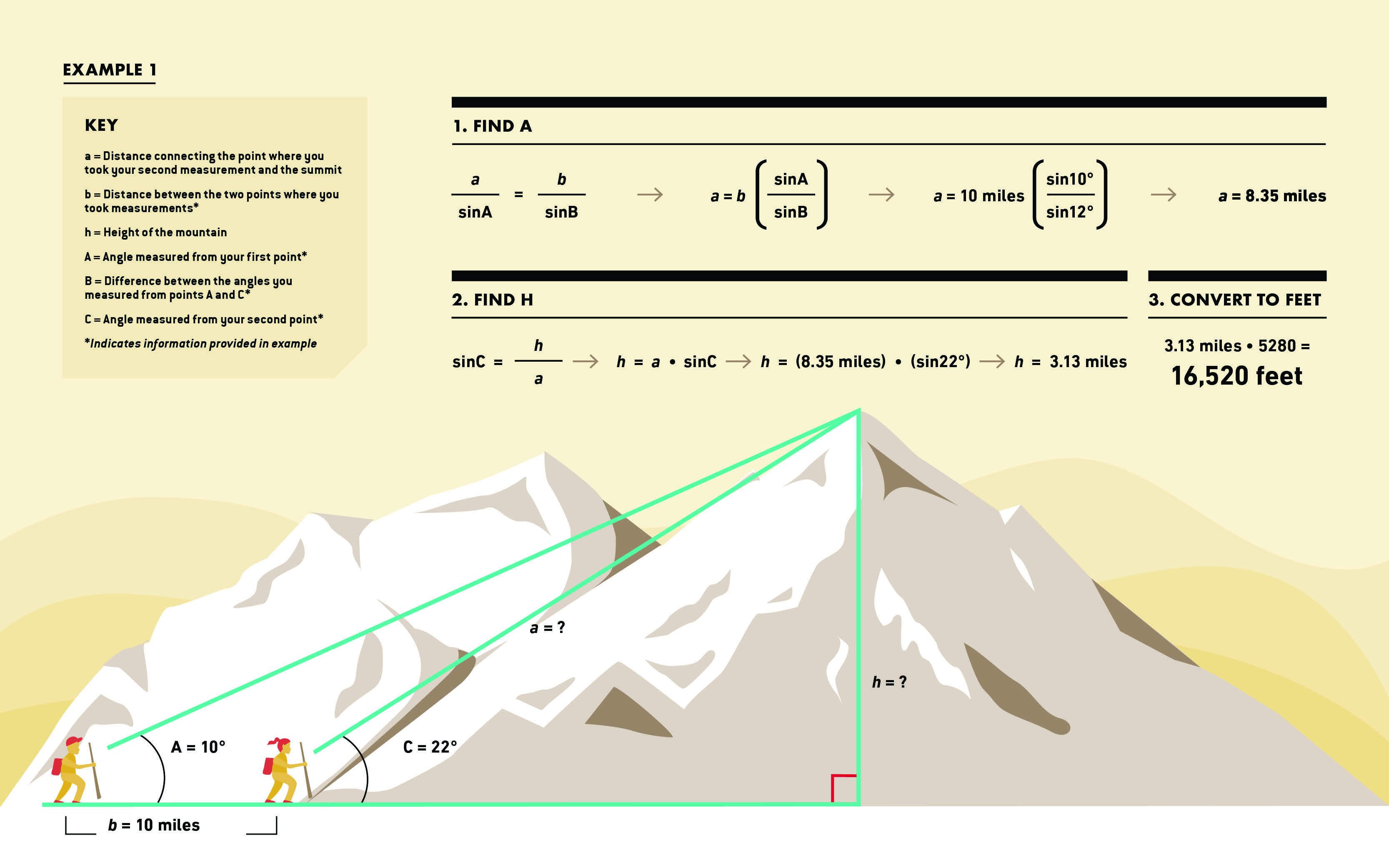 Katie MetzFancy yourself an armchair geodesist? Grab a calculator and plug your measurements into example 1, above, to calculate mountain elevation.

Obtaining an accurate measurement of a mountain’s elevation has become something of an obsession among hikers. Whether you’re tagging New Hampshire’s 48 peaks above 4,000 feet, the 46 4,000-footers in New York’s Adirondacks, or each state’s high point, your list is ultimately determined by elevation. But how, exactly, do geodesists­—scientists who measure and monitor Earth to determine the precise coordinates of any given point—calculate the elevation of a mountain? And is it possible to accurately measure mountain elevation on your own?

“There’s a few methods that you can try that would give you a good estimate,” explains Dr. Michael Floyd, a researcher of geophysics at Massachusetts Institute of Technology. In determining a mountain’s height, a geodesist must consider factors including Earth’s curvature, gravity, and how to calculate mean sea level for measurements on land.

The earliest method used to measure mountains involved the same basic trigonometry you learned in high school. To start, measure the distance between two points at the base of the mountain. Then measure the angles between the top of the mountain and each point using a theodolite—a high-powered protractor that can measure both horizontal and vertical angles (see example 1 above). Geodesists used this method to measure Mount Everest in the 1840s and were off only by about 27 feet from more than 100 miles away.

By the 1920s, geographers measured elevation using cameras and airplanes in a process known as photogrammetry, capturing photos of the terrain from above. By overlapping the photos, cartographers could create a three-dimensional image that would help them trace contours and determine elevation.

Scientists have also determined a peak’s height by comparing the barometric pressure at the base to that at the summit. This method is how AMC drew up its maps for the inaugural edition of the White Mountain Guide more than a century ago. In 1907, topographer Louis Cutter combined U.S. Geological Survey data and base-to-summit distance data—collected by AMC members using an aneroid barometer and a makeshift cyclometer fastened to a bicycle wheel—to create some of AMC’s first maps. 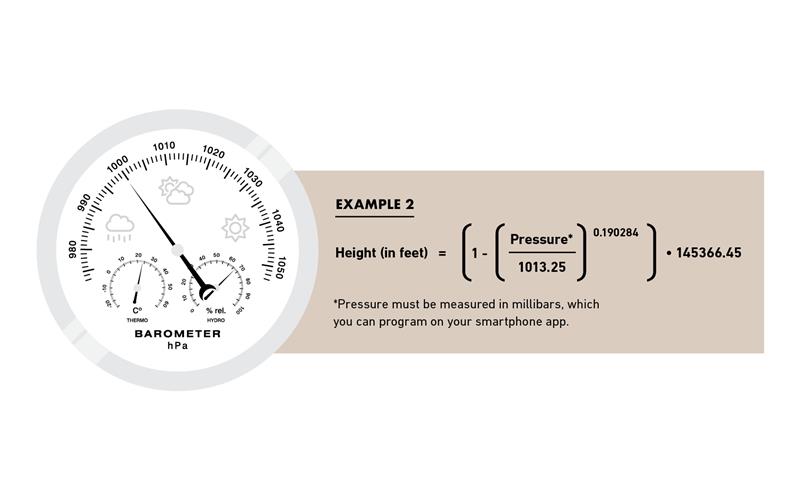 Plug in the barometric pressure reading from your smart phone app to estimate mountain elevation.

To calculate an approximate elevation themselves, today’s armchair geodesists need only download a free barometer or altimeter smartphone app. Make note of the barometric pressure at the trailhead, then again when you reach the summit, to find the difference, remembering that the pressure will decrease as you get higher.  Plug the difference between pressures into a math equation, courtesy of weather.gov, and you’ve got your rough elevation (see example 2 above). Floyd notes that while this could give an approximation, weather shifts between the start and end of a hike make those estimates imprecise. “Accurate measurements would be tracked at the top and bottom simultaneously,” he says.

Scientists use more precise methods, of course. One of the most common and easily accessible methods involves GPS technology. The geodesist hikes to the top of a mountain and positions a receiver that communicates with satellites overhead, recording a broadcast signal from the satellites to determine peak height and location. More recently, Light Detection and Ranging, or LiDAR, technology has come into play. Light pulses are deployed by airplanes over a landscape and reflected back up to the receiver, creating a digital map of the terrain that then can be analyzed to measure the height of large areas—not only the summit of a single mountain.

“LiDAR is important for more than just mapping,” says Larry Garland, AMC’s cartographer, who is using this new technology for his latest projects, including the fifth edition of the Southern New Hampshire Trail Guide, set to publish in spring 2020. “You can use it with forest management, vegetation, land development,” he says. “I’m working with the Bare Earth application, which tells us with more accuracy the elevations of any point.”

LiDAR is so precise—measuring heights accurately to the centimeter—that it’s causing hiking committees, such as AMC’s Four Thousand Footer Club, to consider updating their lists. That committee is still reviewing data Garland collected recently, but Garland expects some peak heights to change in 2020—even if just a little.

“It’s a game changer in our ability to map the landscape,” Garland says. “It’s going to get down to quibbling about inches.”