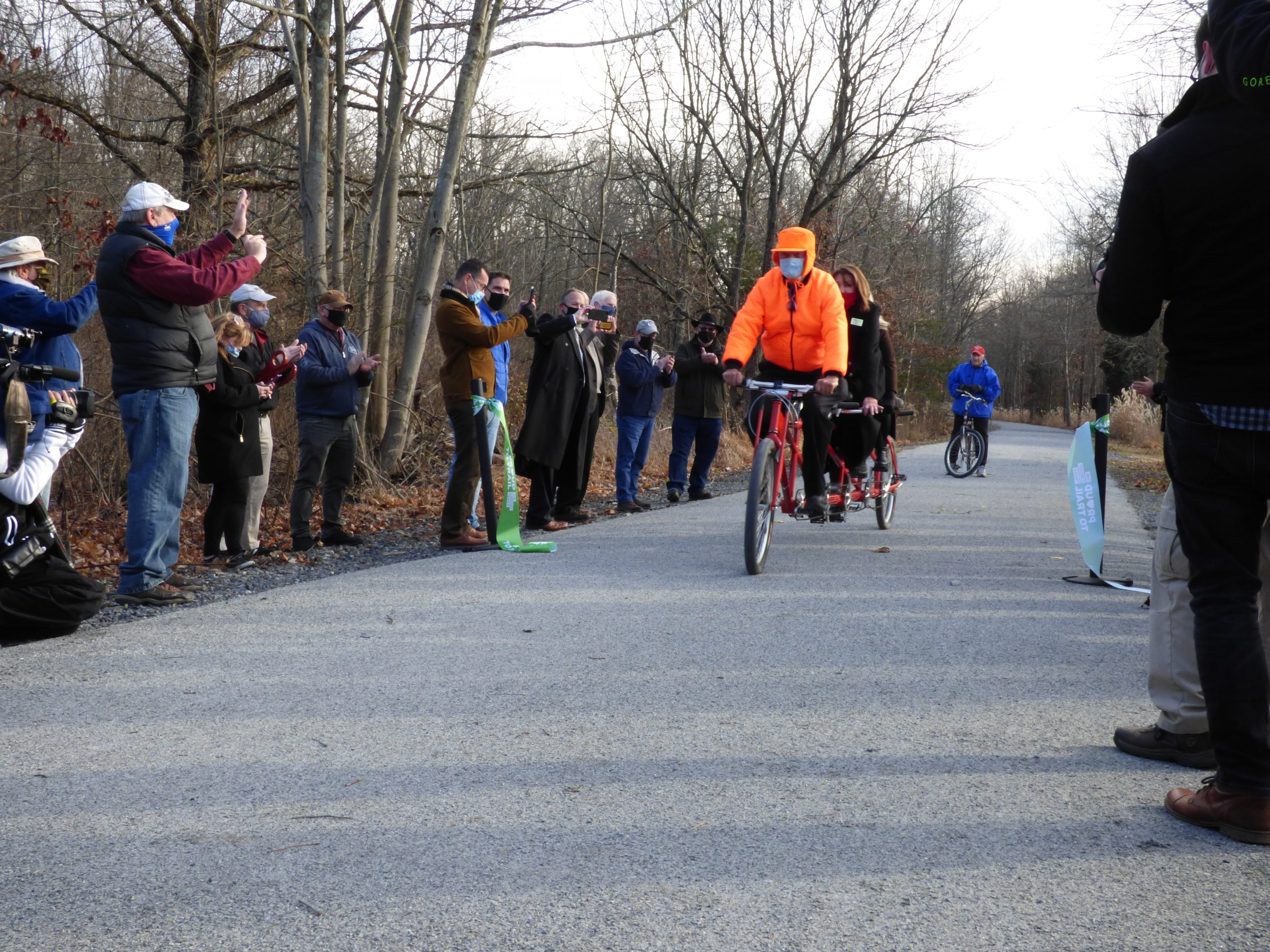 Late last fall, Appalachian Mountain Club staff and volunteers celebrated the opening of a 3-mile rail trail that is an important link in a larger recreation initiative in eastern Pennsylvania.

Taking nearly a decade to come to fruition, the conversion of this former commuter rail line into the Upper Bucks Rail Trail was a key missing link in an effort to build a recreation corridor in suburban Philadelphia. The effort also underscores the complexity, and difficulty, in trying to turn unused rail lines into recreation areas.

AMC and partner organizations are working toward building a larger trail system in the region, targeting areas where gaps exist between continuous trails. The Upper Bucks Rail Trail was a priority but bringing the project to reality still took years to complete, says Trisha McCloskey, a senior planner in the Mid-Atlantic region with AMC.

Despite the relative popularity of rail trails, building one is no easy task. Often taking more than a decade to complete, these projects involve complicated land ownership searches, negotiations with surrounding landowners, funding challenges, and, for some, a belief that rail service will one day return.

“You have to keep the bigger picture in mind to keep you motivated. These are challenging projects,” says McCloskey. “But the payoff is enormous to residents, visitors, and the local economy.” 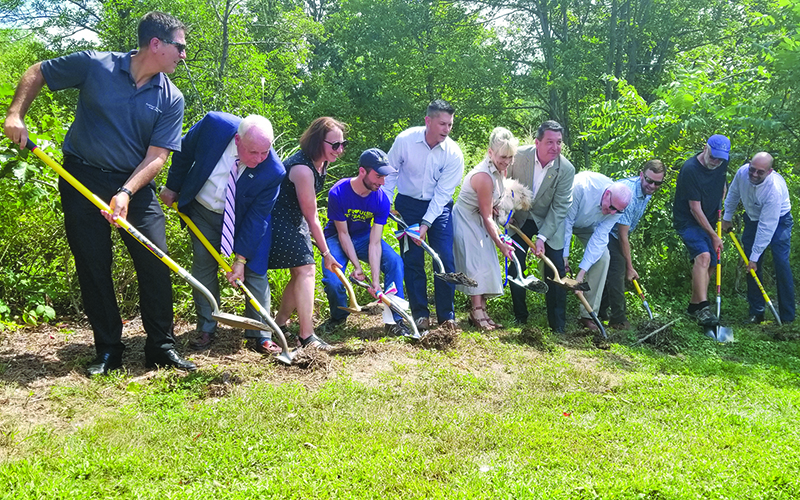 While passenger rail service ended in the area in the early 1980s, the Southeastern Pennsylvania Transportation Authority (SEPTA) was hesitant to yield control of the line, says McCloskey. After years of negotiations, SEPTA agreed to lease the rail line to two townships for 30 years and gave approval to remove the rails.

Getting SEPTA to agree to a lease for the rail corridor was one major hurdle. The other was trying to find funding to pay for the $2 million project. Eventually, the Bucks County Commissioners funded the removal of the rail lines and built a crushed-stone path.

“This really was a community project,” McCloskey says. “It took several levels of government, the hard work of AMC, many meetings, many incarnations of designs. There were so many people involved in getting this project completed.”

Building rail trails is only becoming more complicated. Railroads went through tough economic times in the 1970s and ’80s and abandoned hundreds of miles of rail lines, says Tom Sexton, regional director for the Rails-to-Trails Conservancy, a national advocacy organization for trail conversions. Most of those abandoned lines have already been converted into recreation corridors.

Many of the remaining rail trails being pursued in communities across the country are trail gaps between larger segments, Sexton says. Private property ownership or competing interests for using the corridor are the biggest hindrance in getting those projects completed, he adds.

“Some of the easy pickings were taken care of when there was widespread abandonment,” Sexton says. “We are now taking on more complex projects.”

Competing interest over a 120-mile-long railroad in the lowlands of New York’s Adirondack Mountains delayed progress on a rail-to-trail project that is now under construction—30 years after the idea was first conceived.

Tony Goodwin, known in the Adirondacks for his authoritative hiking guides, saw potential to build a rail trail open to cyclists, runners, and even snowmobile riders on the former New York Central Railroad. Back in the early 1990s, the railroad was being used for excursion trail service that was struggling to turn a profit. New York State, which purchased the line after it was abandoned, was seeking community input on how to best use the corridor.

“The state held a public meeting about what to do with this rail corridor,” Goodwin says, recalling those input sessions in 1991. “About 50 people were at these meetings and all were in favor of keeping the railroad. I was the only one who spoke out against it.”

Goodwin’s vision is slowly becoming reality, thanks to an alliance of community groups that helped turn the tide of public opinion on the benefits of a rail trail. The biggest hurdle the alliance had to overcome was the fact that the line was still an active rail corridor, even if it was being used in limited capacity. Running excursion trains was generating money, and modest popularity, in this tourism-rich area. Goodwin and others had to convince communities along the line, and the state, that a rail trail would create even more economic activity.

“We got people who were more politically savvy than use, and we got town and village boards to pass resolutions in favor of removing the tracks,” Goodwin says. “We knew that some people thought the railroad was a foolish waste of money, and we made the argument about the increased economic benefit of snowmobiling on the corridor.”

After years of negotiations New York agreed to spend $13.2 million to build 34-mile rail trail between Tupper Lake and Lake Placid. The remaining corridor will be used for sightseeing train trips as part of a compromise brokered by the state. The Adirondack Rail Trail, expected to open in 2024, will be the first rail trail located entirely within the Adirondack Park—a 6-million-acre patchwork of public and private land in upstate New York.

For his part, Sexton with the Rails-to-Trails Conservancy believes that shared-use corridors are likely the future of trail projects. The scarcity of corridor easements will make it necessary to put multiple uses on the same stretch of land.

“Creating rights-of-way, long distance, is getting harder and harder because of density and so many stakeholders that want to use that space,” he says. 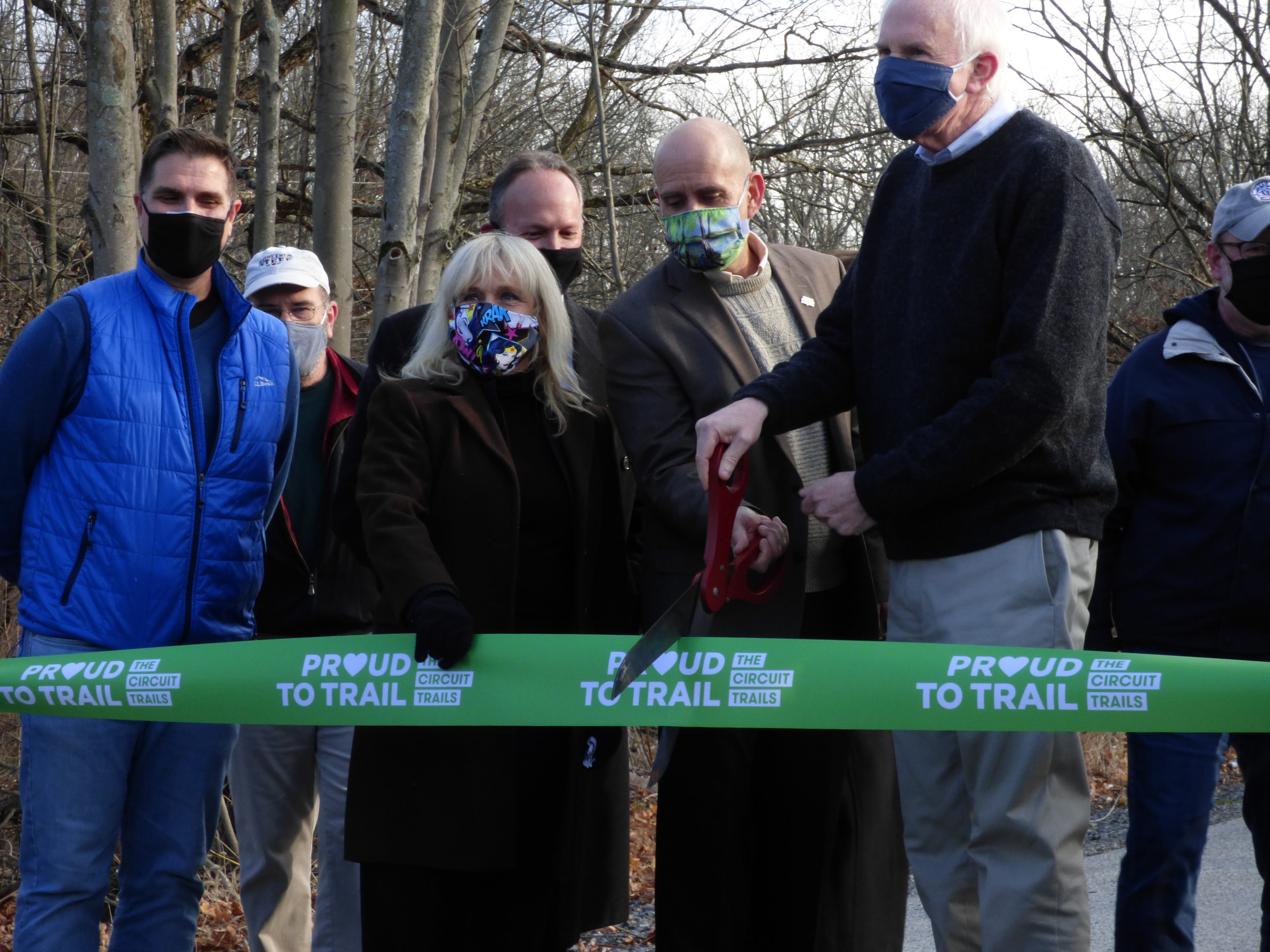 Dedicated volunteers, and an understanding of how recreation projects are funded, are the key to completing rail trails, Sexton says. Without volunteers to build community support and push for funding, trail projects face an uphill battle.

Many community rail-to-trail projects are funded with a combination of state and federal dollars that are designated for transportation funding, Sexton says. While the bulk of transportation funding is used for highway infrastructure, dollars can be set aside for non-motorized transportation like rail trails, he says. But it is a complex system to navigate to get funding. Often, securing either state or federal government funding for rail trails require volunteers to push for their projects at community meetings, Sexton said.

Federal transportation dollars are funneled to states, but how that funding will be allocated is a local decision made by government planners and stakeholder groups, Sexton says. These groups, called metropolitan planning organizations develop short- and long-term plans to prioritize which transportation projects will be funded. Trail advocates often have to push for projects to be funded this way, Sexton says.

“It’s a process—and also a marketing process,” he says. “They have to demonstrate these projects have community support.”

When rail lines become abandoned, state governments, or even local municipalities, have stepped in to keep the corridor open for future development. New Hampshire purchased several rail corridors 15 years ago, paving the way for the Northern Rail Trail that stretches from Lebanon to the outskirts of Concord, says Charles Martin, a board member of the Friends of the Northern Rail Trail, which maintains the trail.

Now, the organization is working to purchase a 0.6-mile section from a private railroad company that will bring the rail trail into downtown Concord, Martin says. The project, including purchasing the line, will cost nearly $150,000, he says.

“The railroad was built in a two-year period and it took us 10 years to get done what we have gotten done so far,” Martin says. “Now we have a big campaign for the last part.”

Having a dedicated group of community volunteers is the best way that fledgling rail trail projects can go from idea to reality, Martin says. At the outset, it is difficult to convince people to get behind a project that isn’t tangible, he says. But an active core group willing to talk to other community members can overcome opposition that may arise.

“Once you have it built, so many more people will get behind it,” Martin says. “There is just a whole lot of hard work to raise the funds and build the trail.”

Patience with the Process

At its heart, a rail trail seems like a fairly straightforward project: turning something that is abandoned and unused into a community asset. But the work behind building a trail is complex, and often time-consuming, Goodwin says. So, for others around the country that are considering a similar project—no matter the mileage—be prepared for a lengthy process, he says.

“Be patient. It’s not unusual to take 10 years to go from abandonment to people riding bicycles on it,” Goodwin says. “You have the legalities, you have the ‘not in my backyard’ types who don’t want it. Those are the kinds of hurdles that need to be overcome.”