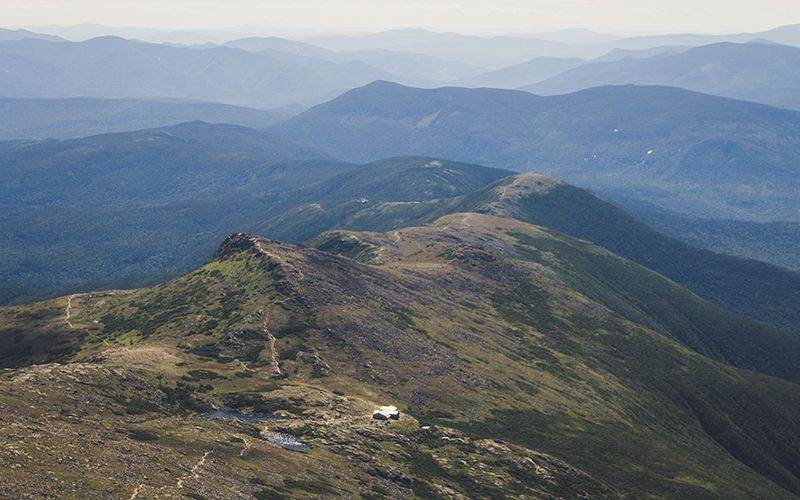 Emily DavenportThe view from Mount Washington—the most iconic of New Hampshire’s 4000 footers—with the southern Presidential Range in the background.

People tend not to climb New Hampshire’s Owl’s Head Mountain on a whim.

The remote mountain is deep in the heart of the Pemigewasset Wilderness, surrounded by some of the most popular summits in the White Mountains, and offers no view.

“It’s become an iconic list,” says Steve Smith, recording secretary of the AMC’s  Four Thousand Footers Club  (FTFC). Among those 48 mountains are New Hampshire’s trademark peaks—like Mounts Washington, Madison, and Lafayette. Anyone who has checked off the full slate of summits has put in a significant amount of work, worthy of a hat-tip from their fellow hikers.

“You don’t have to be a super athlete to do it. But you do have to have some determination, because there’s no such thing, in my opinion, as an easy 4,000-footer,” Smith says. “And you have to be prepared to do it over and over again.”

The drive to keep chasing these peaks, coupled with the inherent quirk of the hiking community, has set many people on a path to summit all of New Hampshire’s 4,000-footers—also known as “The List”—in increasingly creativity ways. Some climbers strive for feats of endurance and speed—summiting all 48 mountains faster than anyone else, for example. As more and more variations of The List come into play, these hikers have taken the 4,000-footers well beyond a simple group of mountains to be climbed.

But even as some seek taxing physical accomplishments, others put their personal touch on the challenge. A hiker doesn’t need world-class athleticism to enjoy a cup of coffee on top of each of the White Mountains’ high peaks, but the nature of finishing an already difficult bucket list, made all-the-more interesting with a distinctive adjustment, gives many hikers an individually rewarding experience worth pursuing. 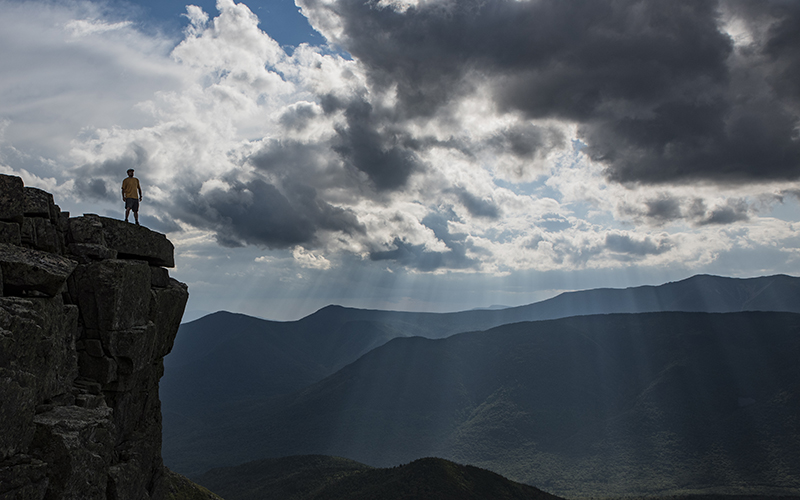 Donald Slater/AMC Photo ContestA hiker takes in the view of the Pemigewasset Wilderness from the Bondcliff Trail on Mount Bondcliff. Owl’s Head is in the midground, and Mount Flume, Mount Liberty, and Little Haystack Mountain on Franconia Ridge are in the background.

A History of the NH48

It’s been nearly 64 years since a spring day in 1957, when a group of AMC members, founders of the  FTFC, gathered to draw up a list of 46 White Mountain summits above the 4,000-foot threshold, taking after the New York-based “Adirondack 46ers”—climbers of that range’s 4,000-foot peaks.

The fact that both groups came up with the same number of significant peaks is either pure coincidence or the mountains’ sense of humor. But neither count lasted long. The United States Geological Survey recorded Galehead Mountain and above 4,000 feet in 1975 and 1980, respectively, according to the  The Green Guide to Low-Impact Hiking and Camping, by Guy and Laura Waterman. The 1980 survey, coupled with the fact that both mountains had 200-foot prominence from their neighbors (a requirement set at the founding of the FTFC), brought the list of New Hampshire 4,000-footers to 48 peaks.

Even today, the New Hampshire 48 remains  unsettled. While Mt. Tecumseh has for years been considered a hair over 4,000 feet, recent surveys using LiDAR, a technology employing lasers to chart topography, puts the mountain at slightly under that mark. But for now, Tecumseh remains an official 4,000-footer.

Meanwhile, surveys of the Adirondacks found that several peaks assumed to be tall enough for the list were in fact well short of 4,000 feet. But while the FTFC adopted the two new summits, their Adirondack counterparts favored tradition and stuck with the original 46.

“[People are] drawn to mountains in a very special way that is compulsive and sort of unstoppable,” Laura Waterman says. As she and Guy assessed in The Green Guide, “Peakbagging is a cross between outdoor recreation, competitive athletics, and religion.” 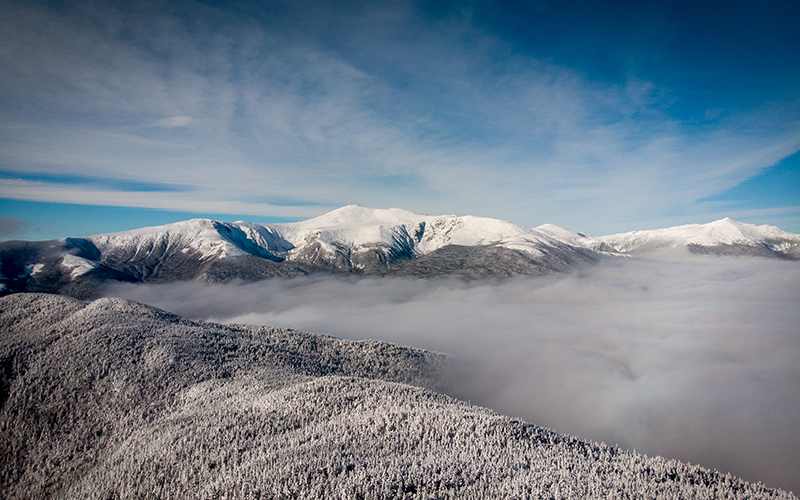 Scott Dresser/AMC Photo ContestSome hikers have taken to attempting to hike all 48 New Hampshire 4000 footers in the winter. Here is the view of the Presidential Range from Wildcat Mountain.

Extending and Expanding the Challenge: Beyond the 48

But while the list may be accessible to the common hiker, it noticeably attracts those who can and will push its boundaries. Many people finish the list only to start it again. Others simply expand it beyond the Granite State. For those hoping to explore the rest of the region, why not hike the 67  New England 4,000-footers? While the bulk come from New Hampshire’s 48, this list adds in five summits in Vermont and 13 in Maine, including two separate peaks of Mount Katahdin and Old Speck Mountain of the demanding Mahoosuc Range. Similarly, hikers might try the 100 highest peaks in New England or all 4,000-footers of New England and New York, known as the Northeast 111. The FTFC also awards a patch for each of these accomplishments.

Winter NH48: If you’ve finished the lists in New England’s unpredictable summer weather, why not try them in punishing winter conditions? Many have, and separate awards are given for each of the above-mentioned lists completed entirely in a calendar winter. A legend of Northeast hiking, Guy Waterman topped New Hampshire’s 4,000-footers 17 times, including in the winter, when he chose to approach the peaks from each of the four compass points.

Four-season White Mountain 4,000-footer Award: And if someone could climb all 48 of New Hampshire’s high peaks during the winter, someone else could surely climb them in the other three seasons as well—that’s four hikes up each of the 48, or 192 summits in total.  This award  also requires 48 hours of volunteer trail maintenance with an established trail-care organization. “One of our hopes for anybody that does a 4,000-footer is that they become a steward as well as a peakbagger,” Smith says.

The Grid:  Taking the list to a different extreme, one hiker climbed all 48 high peaks in each month of the year, finishing in 1989. That’s 576 peaks, a challenge now known as  the Grid, which only 104 hikers have finished since.

But that was too easy for some. In 2016, Sue Johnston, who in 2003 became the third ever finisher of the Grid, went back for another stab at it. Instead of finishing all 576 mountains over the course of a lifetime, as everyone else had, she decided she’d hike them all in a year.  And she did—a remarkable achievement matched only by one other hiker since, Smith says.

Incredibly, two hikers currently hold the record of having completed seven Grids—a total of 4,032 mountains summited—according to  the Grid’s website.

FKTs:  Others turn to speed challenges. Fastest Known Times of famous hikes, like the  Presidential Traverse  or  Pemigewasset Loop, are well sought after. And naturally, the next step is the fastest time for not just a single mountain or series of peaks, but for the entire list. The record for completing all 48 4,000-footers? About  three-and-a-half days.

Dirretissima: Other hikers with a bit more tolerance for the backcountry may try the  Dirretissima—one continuous hike of the 4,000-footers, covering about 250 miles and 100,000 feet of elevation gain and loss, without outside help. Northeastern University student Will Peterson  set the record in 2020 by completing a Derretissima in five days, 13 hours, and five minutes.

And yet, the vast majority of Four Thousand Footers Club members aren’t hiking 50-mile days or hundreds of mountains a year. For an average hiker looking to stand out, the name of the game is creativity.

In a Facebook group dedicated to discussion of hiking the 4,000-footers, one hiker wrote of finishing each hike by filming a video leading up to the “great reveal” of the mountain’s view. “I also am working on my 13-pound trail dog getting his 48,” she adds in the video. The FTFC, in fact, has a specific patch for canines who have completed the list.

Others have pursued The List in their signature gear, whether specific footwear, a bandana, or an outrageous hat.

Another hiker described writing a trail guide after completing each mountain. Now seeking another well-known slate of mountains, Colorado’s “Fourteeners” (peaks higher than 14,000 feet), this hiker does push-ups at the completion of each hike.

The beauty of New Hampshire’s 4000-footer list is its individuality. For some, an appropriate challenge may be chasing the Dirretissima record, or finishing the Grid multiple times. For others, this list provides the opportunity for hikers to put their own special twist on a challenge, whether their goal is to summit 48 peaks in a Santa hat, or to see 48 sunrises, or to simply hike 48 mountains, period.