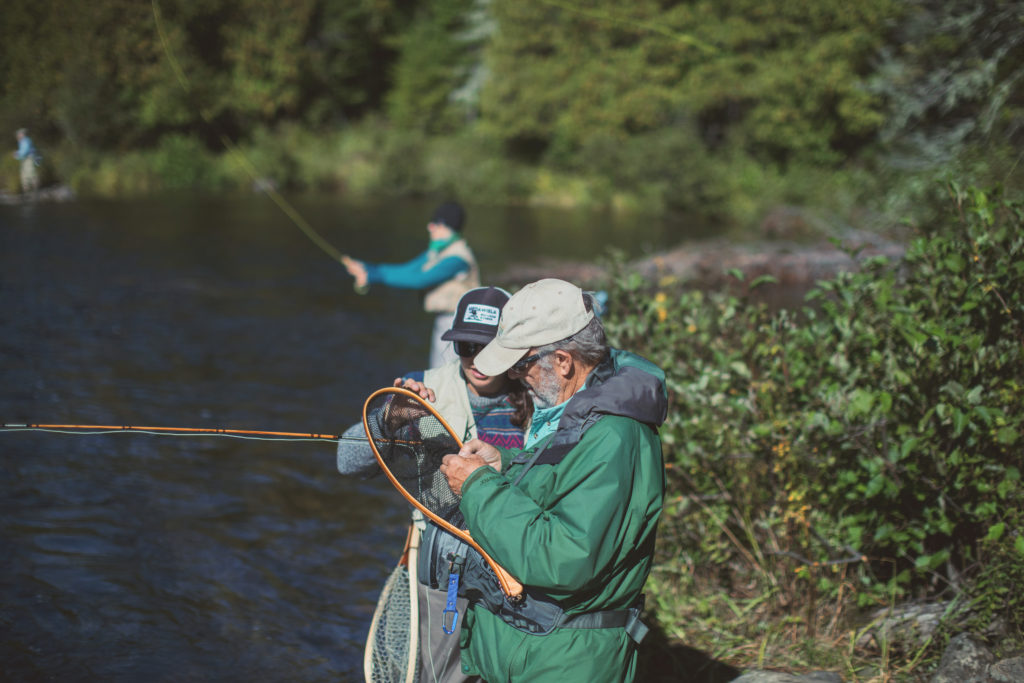 A guided fly fishing excursion in the Maine Woods.

Removing a hook from a fish can be a traumatic experience for both the fish and the one who hooked it, but there’s good news for fly fishing enthusiasts who want to learn catch and release: It’s easy. Plus, proper catch-and-release techniques—required by law in some waters—allow anglers to practice their sport in areas with few fish and help heavily fished areas to recover.

In many places, “catch and release definitely has helped bring back fish populations,” says Shannon LeRoy, AMC Maine Woods Initiative programs manager and a Registered Maine Guide who’s taught fly fishing to children and adults for almost two decades. Properly released fish “can go out, lick their wounds, and go for the next fly that comes at them,” says LeRoy. Such fish can then reproduce, and provide sport for future generations.

Keep the following tips in mind to increase the odds of your fish living to fight another day.

Prepare your hooks
Before you head outdoors, remove the barbs from your hooks or purchase barbless hooks. This will facilitate hook removal and minimize damage to the fish. Using pliers, pinch the barb down on a regular hook to remove it.

LeRoy notes that catching fish without barbed hooks may be more difficult for first-timers since barbs are designed to secure fish on the line, but it becomes easier with experience.

How to handle a fish
“Never touch the fish with a dry hand,” says LeRoy. “I always try to keep the fish in the water. Bringing the fish out of the water is very traumatic to it.”

Nets and any surface such as rocks or sand should also be avoided since they remove the mucous membrane on fishes’ skin, which could lead to infections.

If the fish is struggling, hold it on its back underwater, and cover its head and eyes before removing the hook. “This has a calming effect on the fish and makes it easier to remove the hook,” says LeRoy.

Remove the hook
Removing a barbless hook from a fish should be a breeze, even while it’s still in the water. Since the fish bit a moving fly, the hook is more likely to have caught on the fish’s lip than have been swallowed, facilitating fish survival and hook removal.

“Run your hands down the line to the hook and then give it a little twitch and it usually just pops right out,” LeRoy says.

Those who don’t want to touch the fish can use forceps to remove the hook, keeping the fish stationary in the water with tension on the line. “Hold [the fish] tight with the line to where you can reach down with the forceps,” says LeRoy, who added that commercial hook removers are also available. A “push and twist” with the forceps is usually enough to get the hook out without having to touch the fish.

Revive the fish
If the fish doesn’t struggle to swim away, make sure to resuscitate it. While holding the fish underwater, move it using LeRoy’s method: “Wave the body back and forth so that the head rocks back and forth. That activates the gills and gets oxygen back into it and that wakes them back up.”

Possible problems
Occasionally, a fish will swallow the hook or the hook becomes deeply embedded. If this happens, LeRoy advises taking the fish home to eat. However, “if you’re in catch-and-release water, then you have to release it no matter what,” LeRoy says. While cutting the line and leaving the hook in the fish isn’t ideal, the hook will eventually dissolve.

“Their saliva is so strong that it will disintegrate the hook,” says LeRoy, noting that it can take up to 120 days. “The fish is still capable of moving and eating and breathing.”

Once the fish is freed of the hook, don’t expect to see it again anytime soon—but since you’ve increased its chance to reproduce, know that both you and your children can count on that fishing spot in the future. Let that one fish go today, and you’ll find more tomorrow.