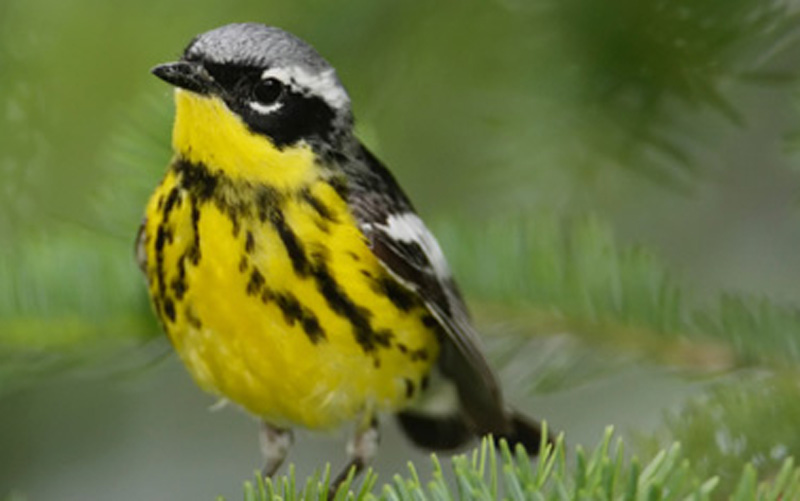 Identifying bird songs can be both beguiling and bewildering. Hundreds of species breed in the Northeast, so how can a listener possibly differentiate between their many songs? It takes practice and a good ear, but almost anyone can learn to distinguish the vocalizations of our common songsters. And with this ability comes an enhanced enjoyment of the outdoors.

STUDY UP
Learning bird songs is in part a process of elimination. First, acquaint yourself with the species in your area and what habitats they frequent. For instance, you shouldn’t expect to hear the exuberant, bubbly refrain of a winter wren in the middle of a hayfield, since they prefer shaded hemlock ravines. Many excellent field guides are on the market, and local species lists are available at most nature centers and online to help you narrow the choices.

Let’s consider birds that call Northeastern woodlands home. Among the many residents of woodland habitats are thrushes, vireos, and warblers. Tackling the first two is fairly easy given that each includes a relatively few species. Warblers, with 25 to 30 species, are another matter because of their sheer diversity.

THRUSHES
The ubiquitous American robin is a thrush, as is the bluebird. But the dark woodlands hold some of our most notable singers—veery, wood thrush, hermit thrush, and Swainson’s thrush. Their songs are reedy and flute-like—ethereal and enchanting. The veery’s soft refrain is a down-the-scale “veer, veer, veer,” while the wood thrush sings a clear bell-tone “ee-o-lay.” The hermit thrush’s song is similar to that of wood thrush, but higher and thinner. And the Swainson’s thrush, found only in upper elevation boreal forest, sings a tune reminiscent of the veery’s, but rising instead of falling.

VIREOS
The songs of vireos, which are a bit larger than warblers, but less active, are composed of short, monotonous phrases. Red-eyed vireos sound as if they are talking to themselves—”see me, here I am, up here.” The cadence is almost frantic, with virtually no pauses. The blue-headed vireo’s phraseology is deliberate and mellow, while the yellow-throated vireo sounds like a hoarse blue-headed. The short phrases, repeated over and over, unmistakably say vireo.

WARBLERS
With 25 to 30 species in the Northeast, these small, active, colorful birds may seem daunting to identify, but each warbler species’ song is unique and learnable. Many birders use mnemonics—cute little phrases—to help them remember these songs. A quick “Weeta, weeta, weeteo,” approximates the song of the black, yellow, and white magnolia warbler. A lazy “Beer, beer, bee” is uttered by the male black-throated blue warbler. And an emphatic “teacher, teacher, teacher” is the refrain of the ovenbird, a large brown warbler that spends a lot of time on the forest floor. Roger Tory Peterson’s pioneering work A Field Guide to the Birds of Eastern and Central North America and other guidebooks include such useful memory aids. Of course, some woodland inhabitants aren’t part of these groups, including the aforementioned winter wren, the throaty scarlet tanager, the sweet-singing rose-breasted grosbeak, and the familiar black-capped chickadee whose breeding song is a clear whistled “fee-bee.”

BE A GOOD LISTENER
When you’re outdoors, don’t be overwhelmed by the cacophony. Concentrate on one song and block out all others. Take some time to truly listen to the song and make notes about its quality (is it hoarse or whistled?), speed (fast or slow?), and pitch (high- or low-pitched?). Pen the notes if you’re a musician, or make up your own mnemonic to help you interpret what the bird is “saying” as a clue to remembering its song. David A. Sibley’s Birding Basics is helpful in this regard. Later, refer to your notes as you listen to some of the increasingly available audio aids, such as CDs (Richard K. Walton and Robert W. Larson’s Birding by Ear CDs provide excellent tutorials for comparing and contrasting similar songs) or online resources. The important thing is to get out there and listen. Start modestly by learning a new species each day or week, and enjoy the concert!

Listen to the bird songs: