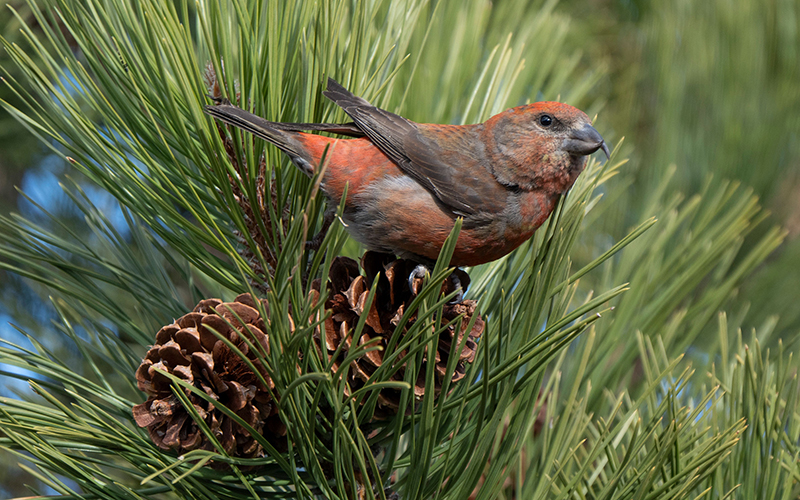 Winter is here, and with it, a certain stillness. Birds’ spring and summer songs are on hiatus and many have migrated beyond Appalachian Mountain Club’s region. Yet plenty remain; flying, foraging, flocking, and communicating with distinct calls. While not as mellifluous as their songs, the birds’ winter language is yours for the hearing—and recording.

Generally, bird songs have a discernable pattern, explains Sarah Wagner, public information specialist at Cornell Lab of Ornithology. They are more complex than calls, which at their simplest, comprise one note. Nonetheless, “Those aren’t distinct categories as much as we’d like them to be. It’s sort of a gradient,” Wagner adds.

Not only do birds’ sounds differ in winter; their timing does, too. “The coldest time of day is after sunrise, and that’s when the birds are going to be least active,” says Geoff LeBaron, National Audubon Society’s Christmas Bird Count director. “Mid-morning can actually be one of the better times to go out.”

In winter, birds gather in more diverse groups, and a chickadee, for example, might alert you to a motley flock. “When you do find a bird or a couple of birds, oftentimes you’ll find a whole lot of birds,” LeBaron explains. He particularly recommends edge habitats for winter listening. “A road through the woods or woods coming to a field…a house [or] yard, or to marsh,” are good options, LeBaron says. Wagner suggests going to the same place every day to wait for birds, or walking “until you hit a flock.” Watch them sing, and capture “high-quality recording just with your iPhone or your Android phone,” she says.

You can also attract birds to your home with a feeder and a (preferably heated) bird bath. “There are birds out there that will find [bird feeders], even in a city situation,” LeBaron says. Popular Science notes that budding urban birdwatchers can find different species anywhere, but for a more focused look, they should head to a local wildlife refuge or join groups, whether Audubon chapters or hyperlocal clubs that meet at city parks.

North American birds’ nonbreeding months, typically late summer through late winter (though they vary by species), offer a reason to get outside and a chance to hone your recording skills. Wagner encourages people to listen for birds’ subtler sounds this winter. “At this point in time, this connection with nature is super important and tangible, and can help you understand the larger world. But it can also just be a really nice sort of palate cleanser,” she said.

Here are six birds whose calls you can hear in AMC’s region this winter:

This small finch (pictured above) has a unique overlapping beak designed for eating conifer seeds. Also unique are the birds’ ten or eleven distinct types. “These birds are defined by their flight calls,” says Matthew Young, founder and president of the Finch Research Network. “That’s a ‘jip jip jip’ or a ‘kip kip kip’ or a…‘whit whit whit’ kind of thing that they do” while flying. Metallic and sharp, the calls have “a cadence, and it’s often given in a sequence,” Young adds. While red crossbills’ official winter range includes Massachusetts and parts of Vermont, New Hampshire, and Maine, “It’s really hard to predict where they are, because it depends where the cone crop is,” LeBaron says. And though typically found in wooded areas, red crossbills sometimes venture into suburban spots in search of food. 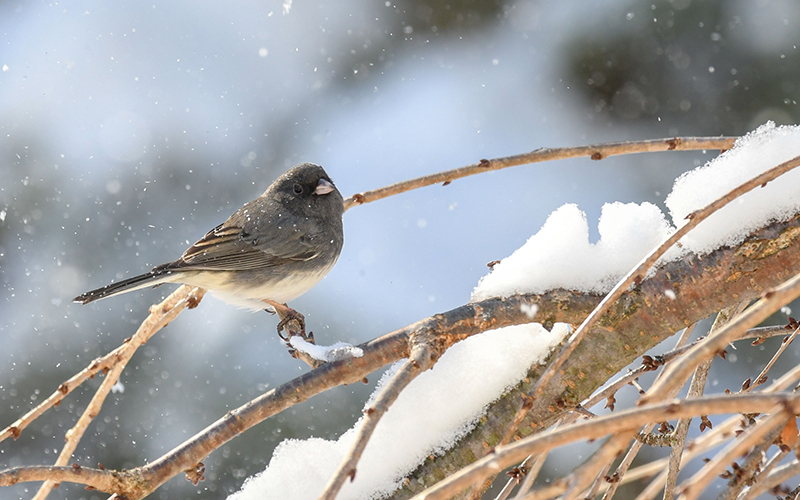 A member of the New World sparrow family, the dark-eyed junco’s two white tail feathers, visible during flight, set them apart from similar birds. LeBaron knows of farmers in western Massachusetts who called them snowbirds, because “they felt like the juncos show up just before the snow starts to fall.” Found throughout AMC’s region in the fall and winter, the junco is a “super common one in the forest” and at bird feeders (especially the ground below), Wagner says. She calls the bird a “triller” that twitters in flight. “They often call while they fly,” she said. “It’s kind of a sharp, musical ‘kew.’” They also sound a high, sharp “chip” note while flying or looking for food. 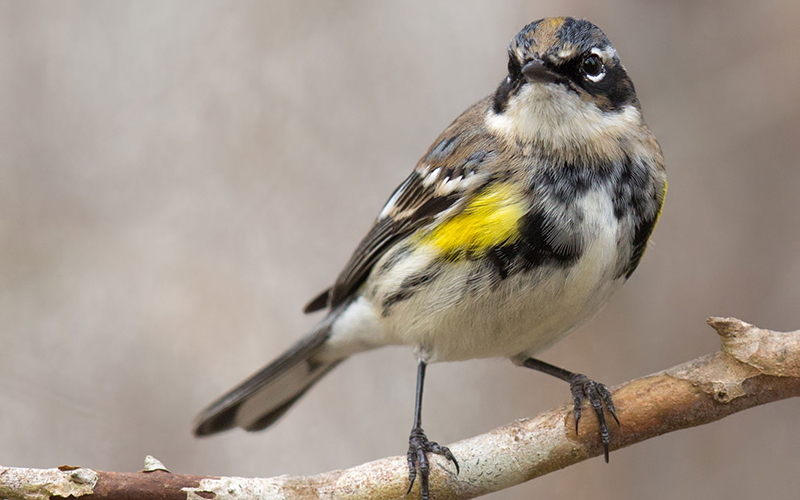 This bird’s yellow, white, and black feathers bring the word “fashionable” to mind, but their colors dim during colder months. “It’s the one warbler species that is heard in North America year-round,” Young says. During nonbreeding months, yellow-rumped warblers are most prevalent in the easternmost band of AMC’s region; their range broadens west heading south from Massachusetts. In the winter, yellow-rumped warblers shift their diet from insects to “the little berries off of myrtle bushes on the coast,” LeBaron says; accordingly, they’re seen in coastal thickets as well as in the woods. “They have a really sharp ‘check’ note,” Wagner says, sometimes given in flight. LeBaron describes a musical ‘chip’ note that’s distinct from other warblers’ calls. 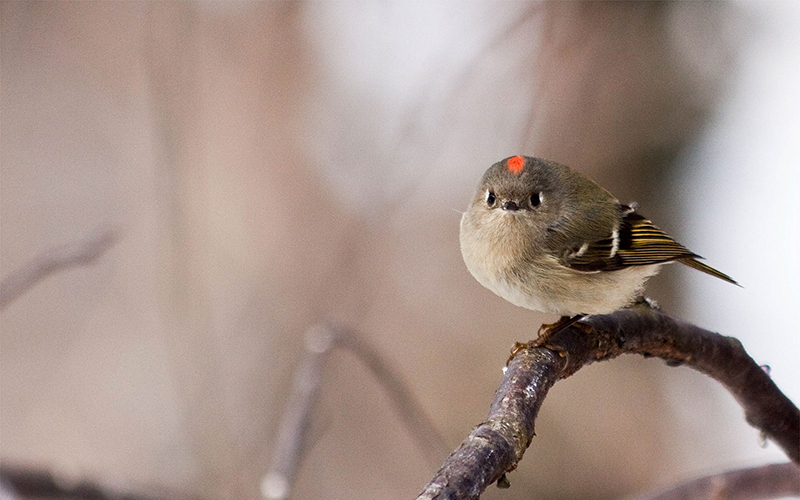 Seen in the southern part of AMC’s region, starting around southern New York state during the winter, the ruby-crowned kinglet’s wings bear black stripes, and the male has a tuft of red on its head. Most common in woods and thickets, the birds “will come down out of the canopy, and even in winter if you have a few insects on trees,” Wagner says. “You can see them foraging on the tree pretty low, which is nice.” While the bird’s typical winter call is a “djit,” Wagner notes that males and females alike also issue a fast, two-part scold that’s “pretty harsh for such a small bird.” 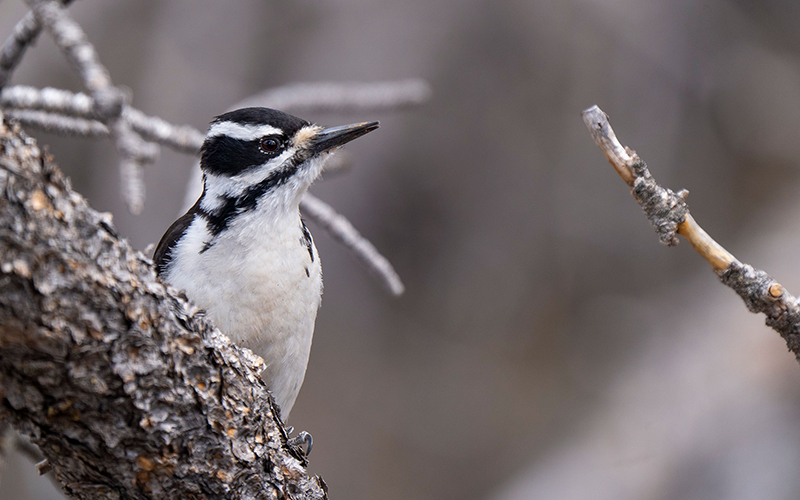 The hairy woodpecker looks very similar to the downy woodpecker, but at 9 inches tall (with a 15-inch wingspan), is about 50 percent larger. “The hairy woodpecker is a big bird,” LeBaron says. Its harsh, loud call carries far. “Their most common sound is a ‘peak’ sound,” Wagner says. While these woodpeckers are found anywhere with large trees throughout AMC’s range in winter, they begin to show territoriality by drumming on trees in “the latter part of the winter time period, especially as you go further south,” Young says. 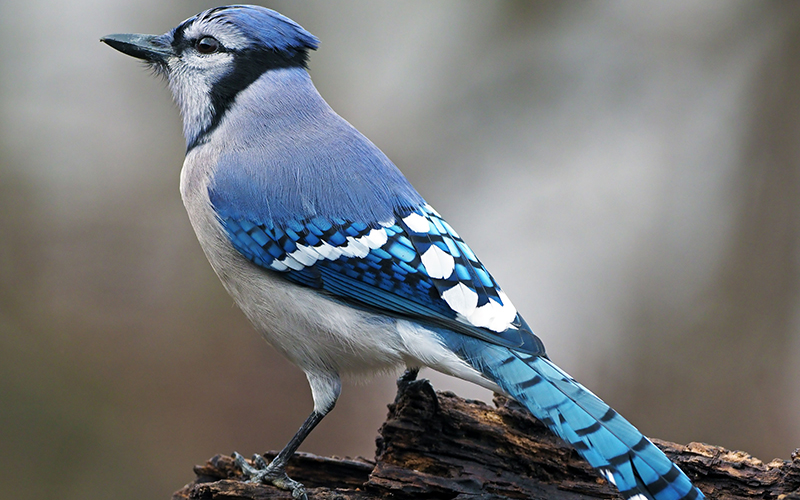 Part of the Corvidae family, blue jays are so common they’ve adapted to city living. They’re an easy bird to hear, even outside of breeding season, when they’re present throughout AMC’s range in a variety of habitats. Omnivorous and gregarious, “they’re nice and loud,” Wagner says. LeBaron adds: “They have the typical ‘jay, jay, jay’ thing that you hear, but then they make a lot of other interesting…noises.” Those noises include other birds’ calls. “They can do an amazingly good red-tailed hawk, or red-shouldered hawk, or broad-winged hawk,” says Young.

Whatever a blue jay sounds like, a smartphone is all the equipment you need to record it (and other birds) and upload. Wagner recommends Cornell Lab’s Merlin or BirdNET apps; the latter identifies species when you upload recordings, while the former does so via uploaded photos or details about the birds. Merlin lets you either upload a photo to ID a bird (if you are lucky to get a photo) or you can answer a series of questions about location, size and color of the bird, etc. to try to ID the bird from Cornell’s extensive catalogue. For a good recording, she suggests standing still, pointing your phone’s microphone toward the calling bird (and away from other noise)—then recording for more than ten seconds, but less than a minute.

One place to upload your field recordings is the Dawn Chorus project, launched May 1 of this year as a cooperative project between BIOTOPIA natural history museum in Munich, Germany, and the Nantesbuch Foundation for Nature and Art. A citizen science and art project, the initiative invited people to record their local morning bird song, then upload the audio files to the project website, creating a biodiversity snapshot. The project emerged from Michael John Gorman’s early April mornings with his two young children, when Germany was in lockdown to prevent the coronavirus from spreading. With less human-made noise, birds’ dawn chorus—the jubilant early-morning swell of birdsong that defines breeding season—came alive with fresh vibrance. It made Gorman, the founding director of BIOTOPIA, wonder: “What if we could…have people [all] over the world capture the unique dawn chorus soundscapes during lockdown and connect with their local biodiversity in a new way—through the ears,” he told AMC Outdoors via email.

Budding citizen scientists could contribute to Dawn Chorus until the end of May 2021; by then, more than 3,500 soundscapes had been uploaded.

Dawn Chorus will return in May—giving you plenty of time to practice recording the morning’s sounds, however subtle.

All audio files courtesy of the Cornell Lab of Ortnithology.