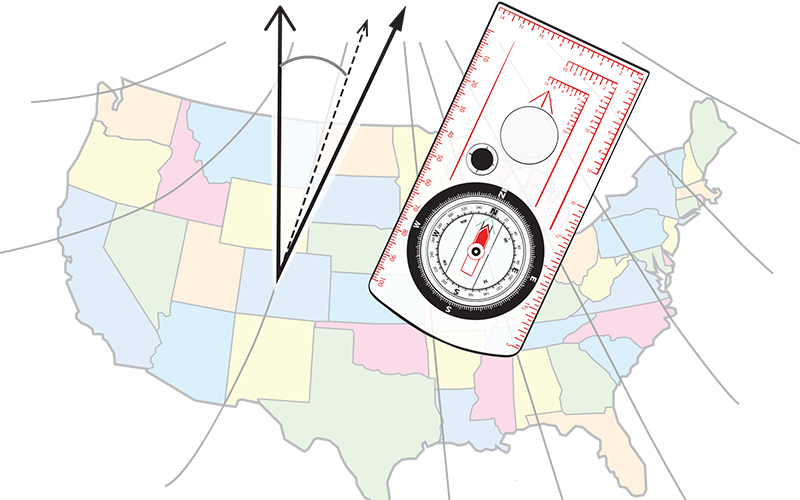 DEBORAH ECCLESTONWhat is declination? It’s the angle between the geographic and magnetic north poles.

Magnetic declination refers to the angle between the geographic North Pole and the magnetic pole located in the Arctic Ocean.

You will discover that good hiking and topographic maps always indicate the local magnetic declination via a declination diagram, which includes one arrow pointing to geographic north (commonly labeled as True North, or TN) and another arrow indicating Magnetic North (or MN). The degree of declination is the angle between these two arrows. Remember, though, that magnetic poles move each year, so if you are using an old edition of a map, you’ll want to check the online NOAA Declination Calculator to calculate your location’s current declination.

It’s also important to know that Earth’s magnetic field is not composed of straight lines. The illustration above shows the current magnetic field, with its curved lines and corresponding degree of declination.

Notice that in some parts of the United States, such as in Rochester, Minn., the declination is zero. But those of us located on the East Coast have to deal with a western declination because the magnetic pole is west of geographic north.

This story was adapted from AMC’s Mountain Skills Manual.