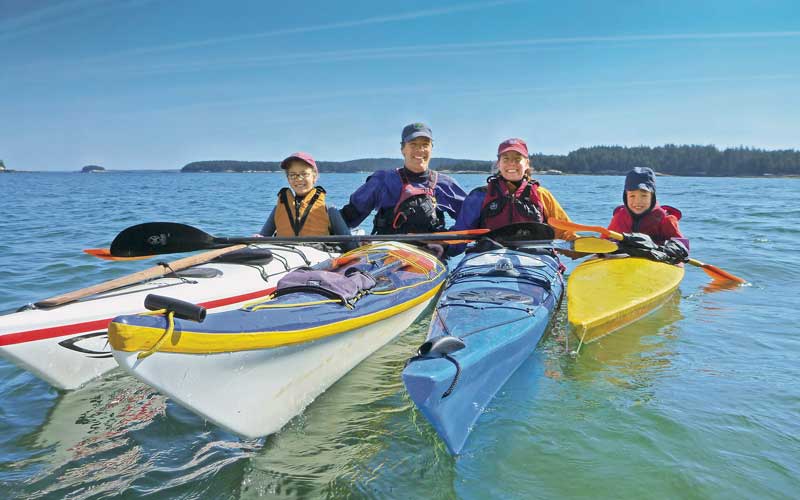 Michael DaughertyThe author and his friends paddled from Stonington, Maine, to Steves Island for a two-day stay.

We had the island to ourselves: 2 acres of spruce forest surrounded by a wonderland of curving, polished granite ledge that dropped into the sea. The kayaks rested above the beach, beyond the reach of the tide, and we’d pitched our tents—each of our two families in a campsite of its own—beneath the canopy of spruce boughs.

With her kids out exploring the island, Casey finally had a moment to sit on a rock and take in her surroundings. She had the sort of involuntary smile one gets when falling in love. “This is so nice,” she said. “Can we live here?”

We could—for two nights anyway. Our home for the night was on Steves Island, about 2 miles off of Stonington, Maine, amid an archipelago of some 60 or more islands. Casey had been on Steves for less than half an hour, but she somehow knew that this was it: her island. Love at first sight? Maybe. She wasn’t the first paddler who’d fallen hard for this islet.

Casey’s husband, Nate, dug some dry bags out of his kayak. “Dinner time,” he said, just as their son Winslow came padding down a trail in his red fleece, snowman-print pajamas, followed by his older sister Lilja. They’d circled the entire island—again.

We walked out onto a hump of pinkish granite ledge, a tiny peninsula with the ocean lapping all around and a few spindly spruce trees sprouting from the top. Rebecca, my wife, sat down first and we followed, sitting in a circle, dropping our dry bags between us. Sunset had begun. Just across a narrow channel to the west, the tiny hub of Georges Head, silhouetted against an amber backdrop, arched skyward like the back of some great bristly-furred animal.

One thing that made this trip possible was the Maine Island Trail Association (MITA). Steves Island is one of more than 200 sites on the trail, which spans the length of the Maine coast, spilling over into New Brunswick, Canada. America’s oldest water trail, now in its 26th year, it is composed of about one-third public lands stewarded by MITA staff and volunteers, while the other two-thirds are owned by private organizations and individuals who have entrusted MITA and its members to care for their property as if it were their own. It’s the best campsite deal around, with the price of a yearly membership, which includes an annually updated guidebook, comparable to the cost of a night at an oceanfront campground. And there are no televisions blaring from neighboring RVs.

When Nate and I started planning a trip that would work for kids, we couldn’t think of a better place than our own backyard, the Stonington-Isle au Haut archipelago. I’d learned to paddle here, a more forgiving patch of ocean than most. Partially sheltered by Isle au Haut, these islands—submerged granite mountaintops with glacier-smoothed ledges and spiky spruce rooting in thin layers of soil—are spaced closely enough that the crossings are short, and if the fog rolls in, as it is apt to do without warning, navigation between them is straightforward. Not only that, but 30 of these islands have public access, and of those, 11 allow camping, with even more private islands open to MITA members.

After dinner, as the moon came up and lit the sea around us, Casey and the kids played a card game by candlelight, while the rest of us reclined in our camp chairs, enjoying a cup of tea and the sparkle of moonlight over a mild chop in Merchant Row. Named for an early resident of the archipelago here, Merchant Row comprises 65 small islands between Stonington and Isle au Haut. Over on Vinalhaven, a large inhabited island west of us, the trio of red lights atop the wind generators blinked, while 2 miles away in Stonington, occasional headlights atop Russ Hill flashed toward the ocean like a beacon.

Lilja looked up from the game. “Why is this called Steves Island?”

“Funny you should ask,” Nate answered. It was the perfect setup for a ghost story.

“Steve” arrived in the middle of the night, long after we’d gone to bed. We awoke to the sound of claws scratching at the rubber hatches on a kayak. I peeked outside and shone my flashlight upon a pair of shiny eyes: a raccoon, sitting in the woods, staring back at me.

In the morning, a Tupperware-like hatch cover lay open with some gear strewn on the ground beside it. Then I remembered the pair of bananas that were missing.

“Maybe that was Steve,” Winslow said. Obviously the ghost story wasn’t convincing enough. From then on, the island’s true owner was a raccoon named Steve who had taken bananas as payment for our stay. This was a small breach of the Leave No Trace (LNT) approach that we tried hard to follow. Usually, a kayak hatch worked as animal-proof food storage; this was the first raccoon we’d encountered that could get into one.

While we ate breakfast, we all had ideas about Steve. It seemed unlikely that he lived on such a small island, so we concluded that he probably smelled dinner cooking and swam over from one of the larger islands nearby.

Another LNT principle would come up soon: carry out all waste. Backpackers are accustomed to digging a hole to poop in, but on a small island with limited topsoil, that could get messy in a hurry. Kayaks, though, have plenty of room to carry everything out. The answer? Wag bags. These kits are basically a big bag (they’re made to hang in a portable toilet) with poop-abating chemicals.

After breakfast, we sat out on the ledge drinking coffee as the sun slowly rose higher. All morning Winslow had ranged over the island, exploring every rocky cleft, coercing his sister to take part in newly invented games. Lilja took notes, mapping the island’s features, giving names to the boulders and tiny coves. Now Nate called them over to the chart, spread across the ledge. He handed Lilja the compass and asked, “Where would you like to go today?”

For many parents, activities like kayaking get put on the back burner until their kids get older. Nate and Casey had tried taking the kids in big tandem kayaks, but for Nate, accustomed to paddling his own quick and nimble boat, it was torture. “Those things are a beast to paddle,” Nate says. “You’re paddling a 20-foot barge all by yourself, while the kid in the front cockpit gets bored. There’s a big difference in being a passenger and in paddling your own boat.” Lilja had started paddling in a custom skin-on-frame kayak that Nate had built for her. Now Winslow paddled that boat, while she paddled a kid-size version of a grown-up fiberglass sea kayak.

At 7 years old, Winslow can’t propel his own boat very far, often relying on his mom, who clipped his boat onto a tow line. Nate paddled up to his daughter, who could now go most of the day without a tow: “Where we going, Lilja?”

She pointed the way, and we followed, tracing an imaginary path over the sea, past Round Island and along the steep, boulder-strewn shore of McGlathery Island. Unlike the white-blazed corridor of the Appalachian Trail, the Maine Island Trail is more a network of potential landing spots with no trail markers to dictate how you get to them. Routes between these landings may change from day to day, influenced by conditions or whims. So, even though the trail is often described as a 375-mile waterway, the route variations are exponential, as is the mileage.

As noted, a new, updated MITA guidebook is issued each year. Members are encouraged to recycle their old copy and check the new one for updates. There are always a few changes. Maybe some eagles nested on an island, or an overused campsite has been taken off the trail, given a chance to rejuvenate.

Part of MITA’s mission is “to establish a model of thoughtful use and volunteer stewardship.” By extending privileges to members, MITA also enlists members as de facto stewards. Judging from the shoreline of Steves, the model works. Visitors tend to take away whatever garbage they find—usually the detritus of the fishing industry. They truly treat the island as their own, which in a sense, it is.

Nearby, a private non-MITA island is a different story. Every summer, a few groups anchor off its shore and leave numerous signs of their visit: trees with hacked-off limbs, fire rings with charred cans and bottles, toilet paper in the weeds.

Each island has its own character. McGlathery’s dense forests top a steep granite-slabbed shoreline where boulders seem poised to tumble into the ocean at any moment, while the perfect sandy beach on Wreck Island brings out the Frisbee player in all of us. But we’d all fallen in love with the welcoming granite arms encircling the pocket beaches on Steves Island.

That night after dinner while we sat on the ledge in the moonlight, the kids struggled to stay awake. The flame from the backpacking stove cast an orange glow across the granite until Nate shut it off, and the night seemed suddenly very quiet, just the lap of small waves squeezing into a rocky chasm a few feet away.

“We’ll be back.” Nate poured the hot water into her cup. “We can come here anytime.”

LEARN MORE: THE BEST OF THE MAINE ISLAND TRAIL FOR…