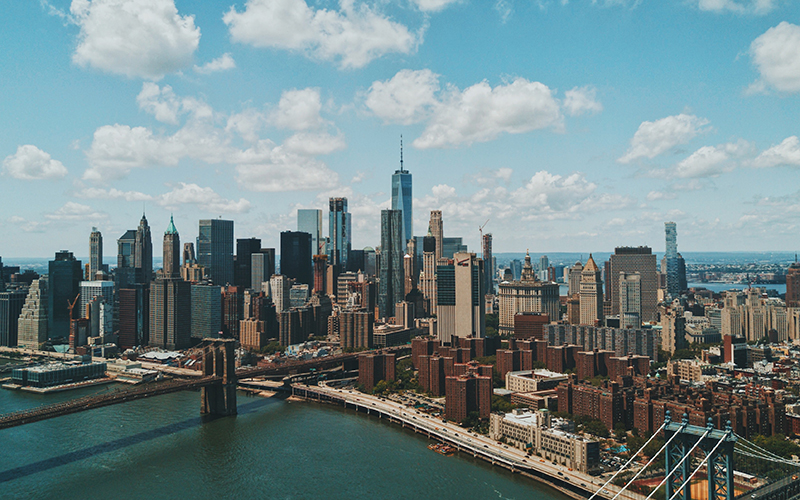 For New England and Mid-Atlantic states experiencing stronger and more frequent storms and hurricanes, warmer and less snowy winters, dangerously high sea levels and storm surges, and the loss of critical ecosystems, the stakes for inaction on climate change could not be higher. Most states across the region have enacted bold plans to reduce greenhouse gas (GHG) emissions and combat climate change, and multistate efforts—such as the nine-state Regional Greenhouse Gas Initiative (RGGI), an AMC-supported program that is reducing emissions from the power sector—only strengthen regional action on the environment.  The Transportation and Climate Initiative (TCI), a regional collaboration of Northeast states and the District of Columbia, is an in-progress program that promises to improve transportation options, develop the clean energy economy, and reduce carbon emissions from the transportation sector.

“The AMC region has come a long way in addressing climate change emissions by recognizing that working together in collaborations like RGGI and the TCI program all will benefit,” says Susan Arnold, AMC’s vice president for conservation. “At the same time, each state is different, and it is essential that they develop state specific climate goals. Our hope is that each state recognizes the urgency of addressing carbon emissions and adopts science-based goals to achieve net zero carbon emissions no later than 2050.”

Several states have recently updated their climate change plans, and AMC actively supports working groups in Maine and Massachusetts as those states make necessary updates in 2021.

Here’s a breakdown of the climate change plans for the states in AMC’s region, with information on how you can urge your leaders to take even bolder action on the existential crisis of our time. States are listed north to south. 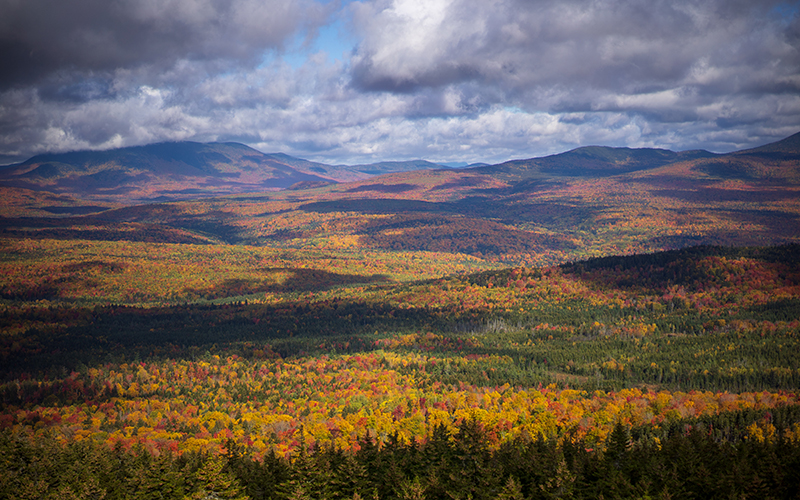 Maine released its 4-year State Climate Action Plan  in December 2020. The plan includes strategies to help the state meet its executive target of achieving net-zero greenhouse gas emissions by 2050 and statutory targets (set in 2019) to reduce GHG emissions 45 percent below 1990 levels by 2030 and at least 80 percent below 1990 levels by 2050, and to be carbon neutral by 2045. Working with partner organizations throughout the state, Maine has laid out a strategy to implement the actions, and progress will be monitored quarterly by the Maine Climate Council and working groups. AMC has joined with the Maine Climate Council in working to revise the state’s Climate Action Plan, originally released in 2004. 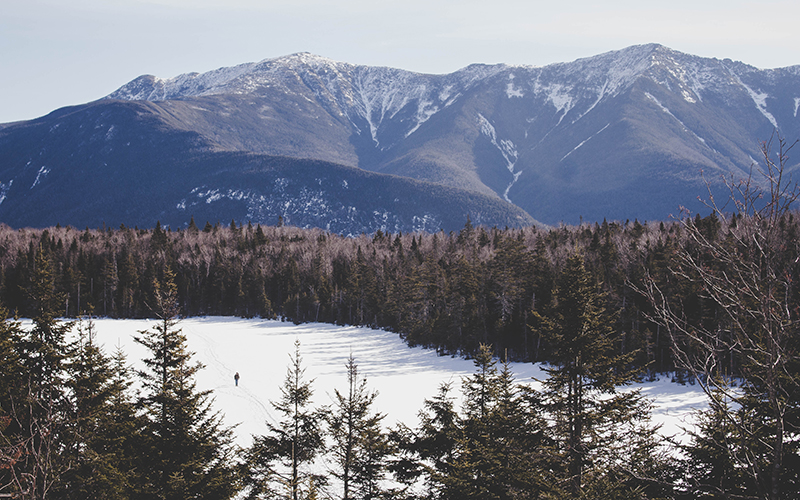 New Hampshire’s Climate Action Plan was released in 2009. The state has a goal of reducing GHG emissions 20 percent below 1990 levels by 2025 and 80 percent below 1990 levels by 2050. Key aspects of the climate action plan include maximizing energy efficiency in buildings, reducing vehicle emissions through state actions, and protecting natural resources to maintain carbon fixing and sequestration.

A more recent ad hoc effort by a group called the New Hampshire Emission Commission had the majority of stakeholders support a state target of pursuing net-zero emissions by 2050, however the full committee only came to a consensus of more study. 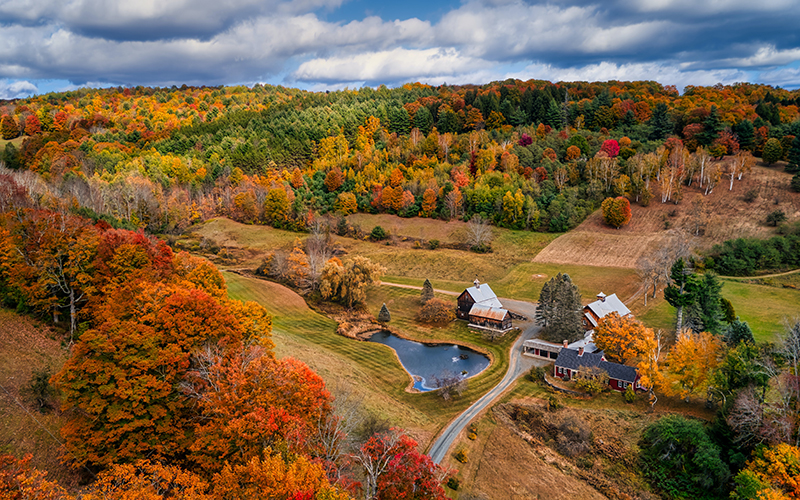 Vermont released the Report to the Governor of the Vermont Climate Action Commission in 2018. The plan details strategies to help the state meet its statutory goals to reduce GHG emissions by at least 50 percent below 1990 levels by 2028 and 75 percent below 1990 levels by 2050. Key aspects of the plan, enacted in 2020, include accelerating the adoption of advanced wood heat to replace high-emitting systems, providing purchasing incentives for electric vehicles, and increasing investment in land conservation. Vermont released a previous climate action plan in 2007. 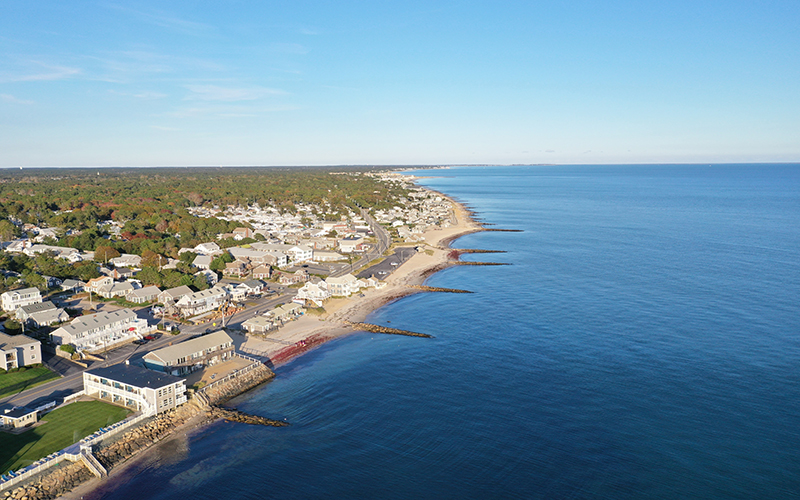 SIMONA STEFANOVA / UNSPLASHDennis, Mass., on the ocean side of Cape Cod, faces stronger storms and sea level rise as a result of climate change.

Massachusetts released its Clean Energy and Climate Plan in 2015. The updated plan details policies necessary to achieve the Commonwealth’s goal of reducing GHG emissions 25 percent below 1990 levels by 2020 and 80 percent below 1990 levels by 2050. Key policies of include increasing imported hydroelectric and wind power from northern New England, implementing more advanced green building codes, and retiring coal-fired power plants. Massachusetts released a previous version of the Clean Energy and Climate Plan in 2010. 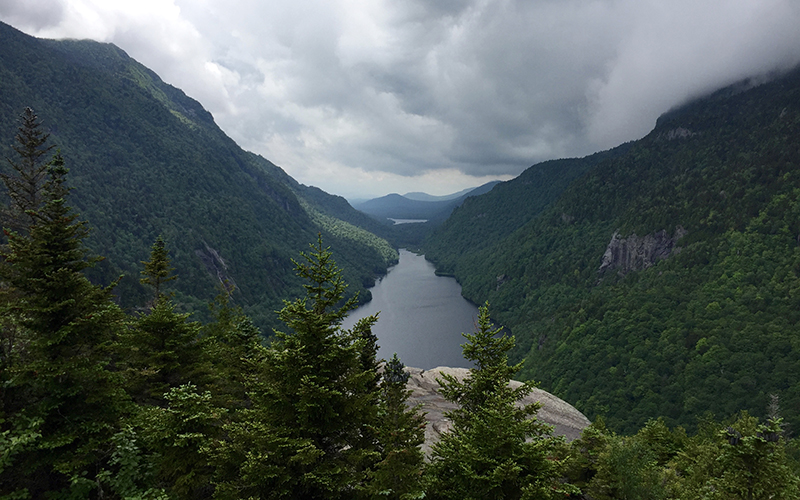 At the end of 2020, New York Department of Environmental Conservation adopted the Statewide Greenhouse Gas Emissions Limits rule (GHG Limits rule), which sets specific limits to reduce GHG emissions from all sectors of the State economy.Those goals include a 40 percent decrease in GHGs by 2030 and no less than 85 percent by 2050, relative to 1990 levels. The targets also aim for net-zero GHG emissions by 2050.

In July 2019, the Climate Leadership and Community Protection Act became law and codified the GHG emission targets used in the GHG Limits rule. The act also created a Climate Action Council, which works to develop a plan of recommendations to meet the targets. 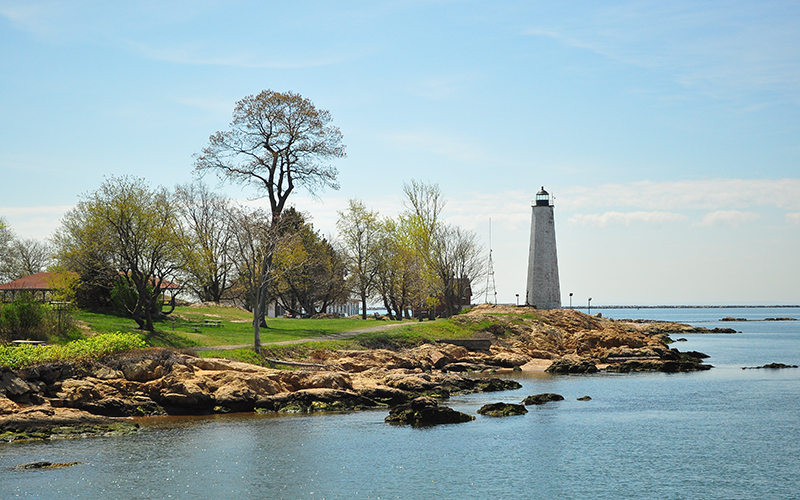 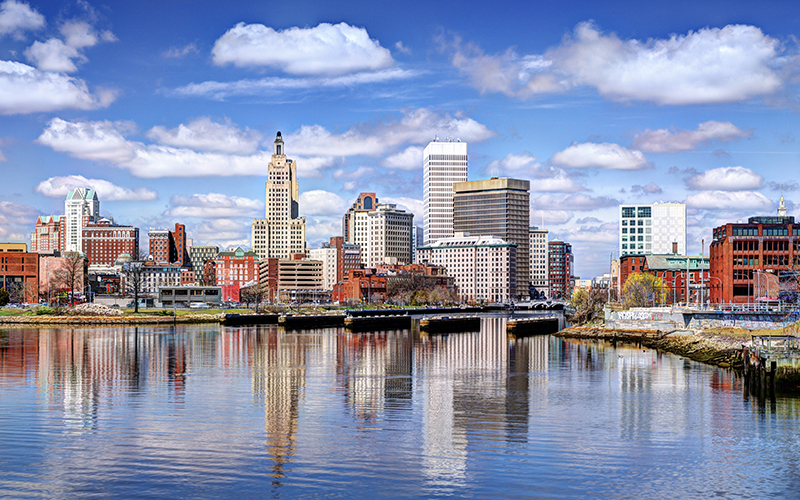 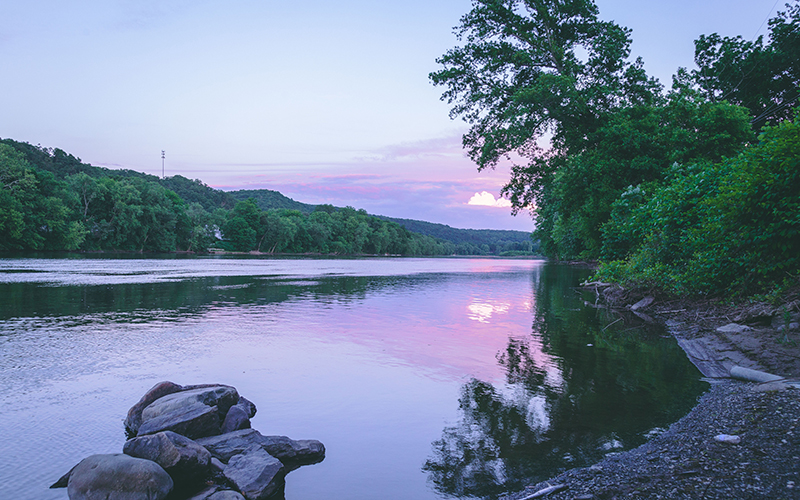 Get involved: Find your legislators and write a letter explaining why climate action is important to you. Learn about the Pennsylvania Department of Environmental Protection’s Energy Programs Office’s Local Climate Action Program(LCAP).  Bring the opportunity to the attention of your municipality or Environmental Advisory Council and advocate for participation and local climate action. 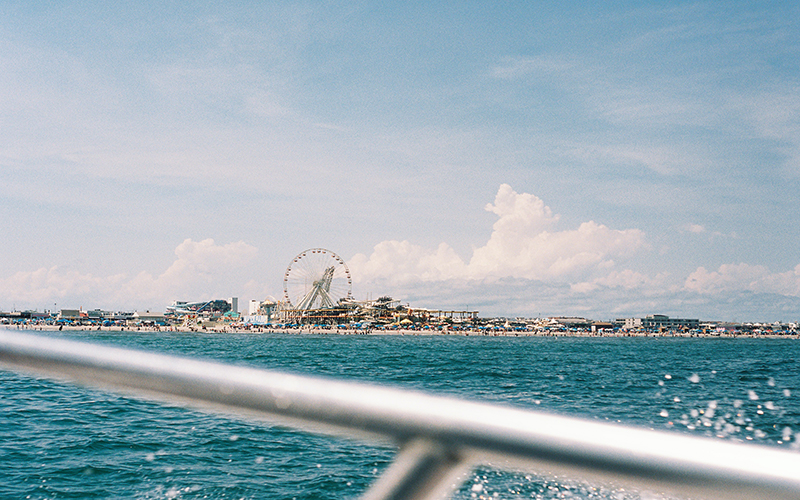 New Jersey released its Global Warming Response Act 80×50 Report in October 2020. The plan identifies pathways to help the state meet its goal of reducing GHG emissions 80 percent below 2006 levels by 2050. New Jersey has currently reduced emissions 20 percent below 2006 levels. Key aspects of the state’s strategy to achieve 80×50 include targets for 100 percent clean energy, electrification of 100 percent of light-duty vehicles, and electrification of 90 percent of buildings.

New Jersey’s climate planning and action are a response to the Global Warming Response Act (GWRA), which was enacted in 2007. The New Jersey assembly passed amendments to strengthen GWRA in 2019. New Jersey released the Global Warming Response Act Recommendations Report in 2009 which provided recommendations for the state to meet its goal to reduce GHG emissions to 1990 levels by 2020 and to put the state on track to meet its 2050 goal. New Jersey’s Energy Master Plan, published in 2019, contains a comprehensive analysis (integrated energy plan) and subsequent set of strategies to deeply decarbonize economy-wide emissions.

Get involved: Find your legislators and write a letter explaining why climate action is important to you. Visit New Jersey Department of Environmental Protection’s online action resource guide to combat climate change. 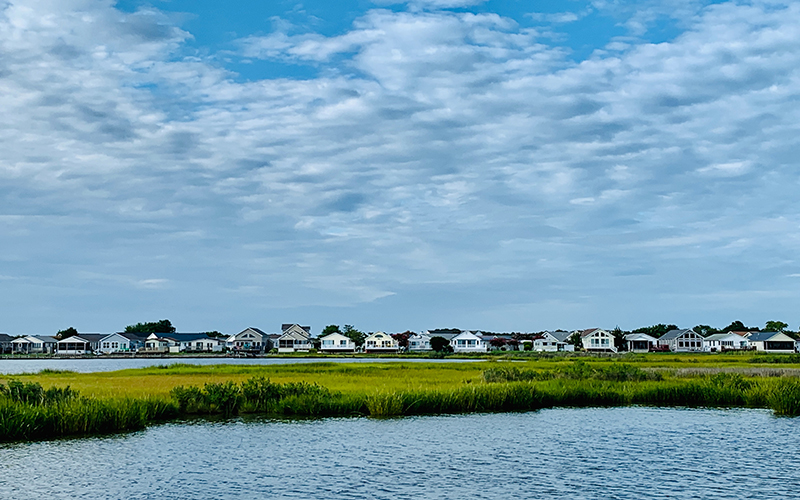 Maryland is close to finalizing its statewide GHG emissions reduction plan, which includes strategies and policies to reduce GHG emissions 40 percent below 2006 levels by 2030.  The 2030 Greenhouse Gas Emission Reduction Act (GGRA) Plan Executive Summary addresses GGRA requirements, which were enacted in 2016 to strengthen the original 2009 GGRA law. The 2030 GGRA Plan includes potential strategies the state could use after 2030 to get closer to a 80 percent reduction in GHG emissions by 2050. Key aspects of the draft plan include a 100 percent clean electricity standard by 2040, expanding the Regional Greenhouse Gas Initiative, and potentially joining the regional Transportation and Climate Initiative.

Maryland released its last statewide Greenhouse Gas Emissions Reduction Act Plan in 2015. The 2015 plan includes policies and programs to help the state meet its then goal of reducing GHG emissions 25 percent below 2006 levels by 2020. Key aspects of the 2015 plan include focusing on renewable energy development, increasing the state’s emphasis on adaptation, and promoting energy efficiency measures. 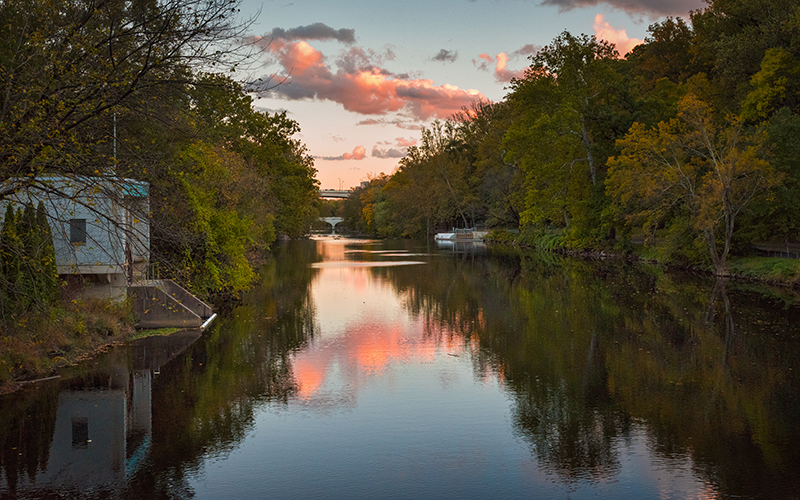 GEOFF LIVINGSTON / CREATIVE COMMONS BY FLICKRDelaware’s inlets, rivers, and beaches give it more than 350 miles of coastline and increase the state’s vulnerability to the effects of climate change.

Delaware is finalizing its Climate Action Plan following its 2020 stakeholder engagement process and the release of the Delaware Climate Action Plan Supporting Technical Greenhouse Gas Mitigation Analysis Report.. The analysis report showed that Delaware is on track to reduce GHG emissions 30 percent below 2008 levels by 2030, the goal adopted in the 2014plan, the Climate Framework for Delaware. The framework proposes 155 actions to help the state meet its goal of reducing GHG emissions 30 percent below 2008 levels by 2030 and adapt to climate change. Key aspects include purchasing and deploying lower-emitting vehicles, advocating for low-carbon building design practices, and developing approaches to reduce the impacts of climate change on agriculture and food production. 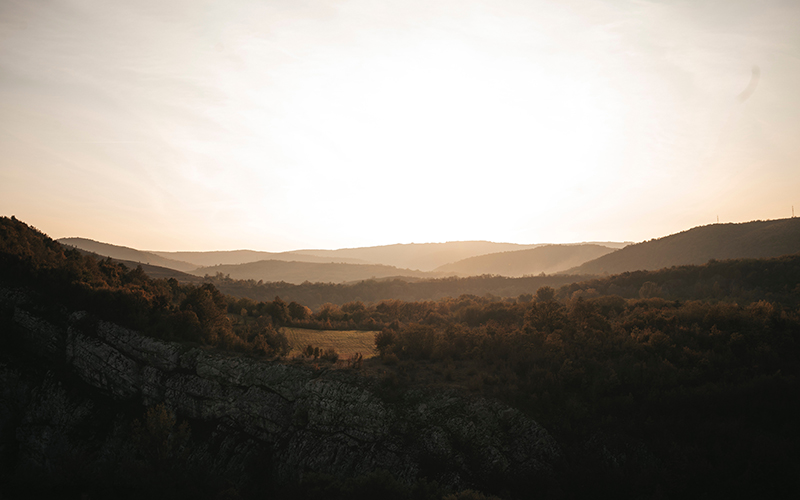 TESLARIU MIHAI / UNSPLASHVirginia is widely seen as a leader in transitioning to low-carbon energy sources.

Virginia has a statutory target to achieve net-zero GHG emissions across all sectors by 2045, which was enacted in 2020. The Commonwealth released Final Report: A Climate Change Action Plan in 2008. The report provides policy recommendations for how the state can meet its goal of reducing GHG emissions at least 30 percent below a business-as-usual projection by 2025. Key aspects of the 2008 plan include establishing a capital fund for energy efficiency investments, enacting state incentives for the purchase of fuel-efficient vehicles, and educating the public about climate change and action needed to address it.

“Coming out strong on Climate Action, Virginia’s target gets the state to net-zero five years before the federal 2050 timeline,” says Kimberly Witt, Mid-Atlantic policy manager for AMC. “Additional focus on mitigating the negative impacts of climate change and the energy transition for disproportionately impacted communities set Virginia up to be a leader in deploying the low-carbon energy economy.”