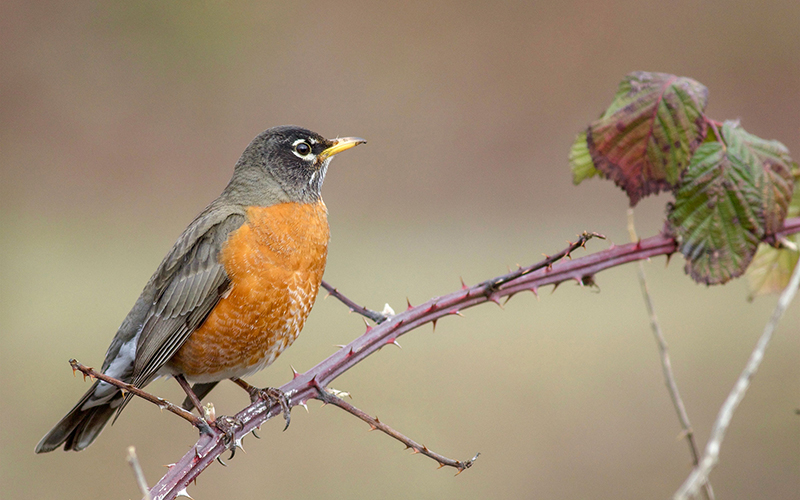 Kathryn Keith / Courtesy of the National Audubon SocietyWhen birds and climate change clash: Scientists say the American robin, whose return to northern regions traditionally signals the beginning of spring, has, in many cases, stopped migrating altogether because of increasingly warm winters.

A warming planet is wreaking havoc on bird populations.

That’s the assessment of two big reports on North American birds, the latest of which foresees a bleak future for our feathered friends if climate change is not curbed. The National Audubon Society on October 10 published Survival by Degrees: 389 Bird Species on the Brink, which found that two-thirds of the continent’s bird species will lose more than 50 percent of the places they live by 2080, unless humans can tamp down global temperature increases. Holding global warming to 1.5 degrees Celsius (34.7 degrees Fahrenheit) this century, rather than letting the planet warm 3 degrees, which the worst-case models project, could improve outcomes for up to three-quarters of threatened bird species, Audubon officials say.

Audubon researchers used more than 140 million records of birds across four seasons, including many observations collected by hobby bird-watchers across the continent, overlaying threats—such as fires and sea level rise—and applying climate change predictions found in the 2014 Intergovernmental Panel on Climate Change (IPCC) report. “No one has assembled a larger data set, from as many different sources, when looking at the effects of climate change on birds,” says Dr. Brooke Bateman, a senior climate scientist with Audubon, who also announced the launch of a searchable, web-based tool that makes it possible for the public to see which birds near them are at risk, and how.

Audubon’s report comes just weeks after scientists from the Cornell Lab of Ornithology declared that, in the last 50 years, 3 million North American birds—or one in four of the continent’s total bird population—has disappeared. The study, which took into account decades of data, found that human factors, such as pesticide use and the loss of habitat to farmland, have caused the dramatic losses in almost all categories of birds.

This includes many bird species native to the East. Grassland birds have seen their population cut in half since 1970, with shorebirds—such the piping plover, seen on many East Coast beaches—losing 37 percent of their population. Eastern forest birds have decreased in number by 17 percent, the Cornell study shows. Breeding populations of birds are especially at risk in the Northeast, according to the Audubon climate report. Bateman of Audubon says the threat to birds here begins with the habitat range shifts due to the changing climate and is exacerbated by additional challenges, such as sea level rise, extreme heat, heavy rainfall, urbanization, and changes to the land cover.

“So, you’re seeing birds having to move to keep up with the existing climate conditions, and then on top of that, these other threats,” Bateman says. “Some [threats] are going to create habitat loss, and others are going to wreak havoc on breeding populations and nesting success, as well as survival.”

Consider the Carolina wren. Bateman’s father has started seeing the species—which is native to the South—at his backyard bird feeder on Long Island, N.Y., where he’s been feeding birds for 40 years. “That’s a species our research has shown has expanded its range northward because of warming winters,” she says. “It’s not just something that’s happening out there; it’s something people in their own backyards are starting to see.”

Both reports do contain some reason for hope. Cornell’s scientists found that raptors, such as eagles and falcons, and waterfowl, such as ducks, have actually seen their populations increase, demonstrating that conservation efforts work. And according to the Audubon report, holding Earth’s warming to 1.5 degrees Celsius above pre-19th century levels will improve outcomes for 76 percent of vulnerable bird species and save up to 150 species from extinction.

AMC stands with the majority opinion of scientists that human activity is contributing to an increasingly warm planet, and that land conservation and the replacement of fossil fuels with renewable sources of energy can help stabilize carbon emissions. In addition to ongoing efforts to protect land and open spaces that birds inhabit, AMC is fighting federal efforts to roll back Clean Water Act protections and regulations concerning mercury pollution—actions which, if enacted, would threaten wildlife populations. AMC is also strongly urging Congress to permanently dedicate financial backing for the Land and Water Conservation Fund, so that the full amount of authorized funding—$900 million from offshore oil and gas leases—will be reliably available for projects that protect land and waterways, including wildlife refuges and other critical habitat areas, according to Heather Clish, AMC’s director of conservation and recreation policy.

“The startling recent report on the dramatic decline in bird populations, and the new Audubon report on the forecasted decline of species due to climate change, underscore the urgency of protecting the forested landscapes of the East and ensuring that funding for habitat protection is reliably available through the Land and Water Conservation Fund, as well as state-based sources,” Clish says.