New England Winter is Getting Shorter and Less Snowy. Here’s Why. 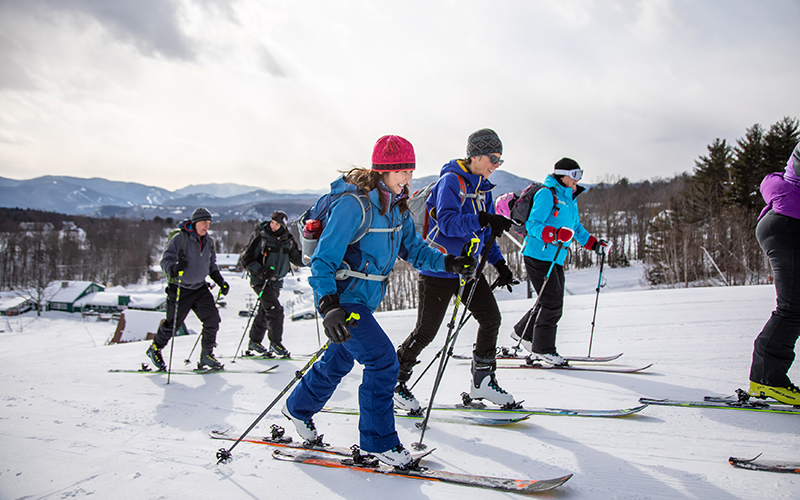 Before dawn on January 12, the temperature at the summit of Mount Washington—famously home to some of the world’s worst weather—had already hit an eerily balmy 43 degrees Fahrenheit, nearly 50 degrees higher than the average mid-winter low. It was part of a two-day winter warmup that sent temperatures into the 60s and 70s across Southern New England and even near 50 in the Maine Woods, melting snow and frustrating outdoor enthusiasts.

Kyle Huston, of Portsmouth, N.H., posted a video on Instagram of himself backcountry skiing through slushy, shallower-than-normal snowpack on the side of Mount Washington. The accompanying appeal spelled out his recreational desperation: “Whatever god you pray to….pray for more snow.”

Sure enough, a weather system the following week dropped temperatures back to seasonal norms, along with several inches of snow. Scientists tell us that while a single unseasonably warm or cold day does not necessarily prove or disprove the reality of climate change, wild meteorological swings like January’s are occurring more frequently than they used to. Two new reports, cowritten by AMC’s director of research, Sarah Nelson, shed further light on the climatological shifts impacting Northeast winters—and, by default, outdoor recreation, the integrity of our open spaces, and wildlife.

In one paper, titled “Winter Weather Whiplash: Impacts of Meteorological Events Misaligned With Natural and Human Systems in Seasonally Snow-Covered Regions,” research led by scientists at the University of Winnipeg and University of New Hampshire (UNH) describes wild swings between frozen and unfrozen conditions (“whiplash”), and observes that they could be occurring more frequently as a result of climate change. While identifying the need for further analysis of the meteorological data to verify the frequency of such whiplash events, Nelson and her co-authors present a handful of case studies showing that rapid thaws and freezes damage trees and crops, causing flooding and electrical outages. In February of 2016, for instance, a mid-winter warmup brought rain to Eastern Canada and Vermont, melting ice and snow and overwhelming rivers and streams.

“Events that don’t happen very often can still have an outsized impact,” Nelson says. “You have snow on the ground, it warms up, and then it rains in the middle of winter. That can melt the entire snowpack or create massive runoff, at least. You’re getting a huge burst of water when vegetation and soils are not prepared to absorb the water, which can create major flooding events.”

A second paper—a collaboration between researchers at the Hubbard Brook Research Foundation, UNH, University of Winnipeg, University of Maine, and AMC—is titled “Confronting our Changing Winters: Indicators of Winter Climate Change in the Northern Forest.” In the report, scientists examined 100 years of winter temperature and precipitation data collected from weather stations across the forested regions of Northeastern North America, revealing what many who call those places home already assumed: we are losing the cold, we are losing the snow, and winters are getting shorter. The trends are bad news for winter outdoor recreation in the backcountry, Nelson says, which relies on long, consistent seasons of snow and cold.

“There can be great conditions some of the time, but often it’s the variability [that causes problems],” she says. “There’s snow on the ground and all of a sudden we get a huge rain event, and it melts away or turns into ice—which is terrible for recreation.”

Milder, less snowy winters featuring more temperature swings are hurting wildlife as well, the reports reveal. Ruffed grouse, for example, keep warm and conserve energy in the winter by digging burrows in the snow, called snow roosting. If snow isn’t deep enough to burrow, or if ice is too hard for the grouse to penetrate, the bird must find alternative ways to roost—potentially leading to a decline in its population, scientists warn. Similarly, shorter snowy seasons create what scientists call a “camouflage mismatch” for white-furred snowshoe hare, which rely on their ability to blend in with the snow to hide from predators.

Nelson says the opportunities for further research are immense. For instance, while most of the data for the reports were collected from lower-elevation weather stations, Nelson points to a proposal she wrote with researchers from AMC and UNH to enlist citizen scientists to collect snow depth data using avalanche probes under the forest canopy and at high-elevation sites.

“The mountains are where it all starts, and they’re contributing to stream flow and drinking water,” she says. “A lot of times scientists say we need more data—in this case, we really do.”