The Mid-Atlantic Highlands and the Highlands Conservation Act: An Explainer 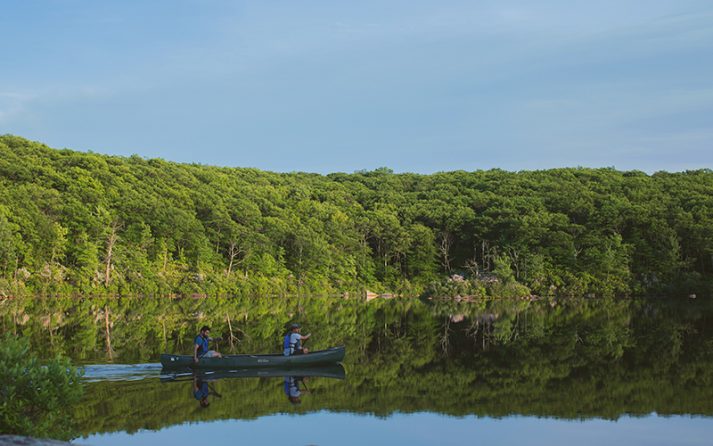 The Mid-Atlantic Highlands comprise a ribbon of green space stretching through northwestern Connecticut, New York, New Jersey, and Pennsylvania—the geographical heart of AMC’s region. Not surprisingly, protecting such a large and unspoiled swath of land in the nation’s most populous and industrial corridor takes a lot of day-to-day work, and an act of Congress every few years: the Highlands Conservation Act (HCA), which is set to expire near the end of 2021.

For the past decade, The Highlands Coalition—for which AMC serves as fiscal agent and helps lead—has convened around 200 organizations advocating for full federal funding of the act, passed in 2004, which provides for the purchase and preservation of threatened lands in the four-state Northeastern and Mid-Atlantic corridor. In 2019, Congress authorized $10 million be allocated to land conservation projects, and in 2020 authorized $20 million.

The 2021 reauthorization bill was introduced in late January, and AMC policy staff are central in an effort to extend and amend the program. We caught up with Mark Zakutansky, AMC’s director of conservation and policy engagement, to ask him more about the Mid-Atlantic Highlands, the Highlands Conservation Act, and why they matter.

Where are the Mid-Atlantic Highlands, and how does the land benefit those who live and play there?

Mark Zakutansky: I describe the Highlands as the forested foothills to the Appalachians. Though it is part of the Appalachian Mountain region, the Highlands are the first significant, intact forested greenbelt as you head west or north from Philadelphia, New York City, and Hartford. The land is notable for its rolling hills, steeper rocky outcrops, rich agricultural valleys, natural lakes and reservoirs, and forests. The communities of the Highlands are often smaller hamlets with rich history, but encroaching development from the suburbs has led to the loss and fragmentation of the Highlands in some areas, further mobilizing advocates to help ensure the protection of the remaining areas. The land historically provided natural resources extraction from forestry to iron mines, tanneries, and more, and now is more oriented for outdoor recreation and providing habitat and clean drinking water to downstream communities. 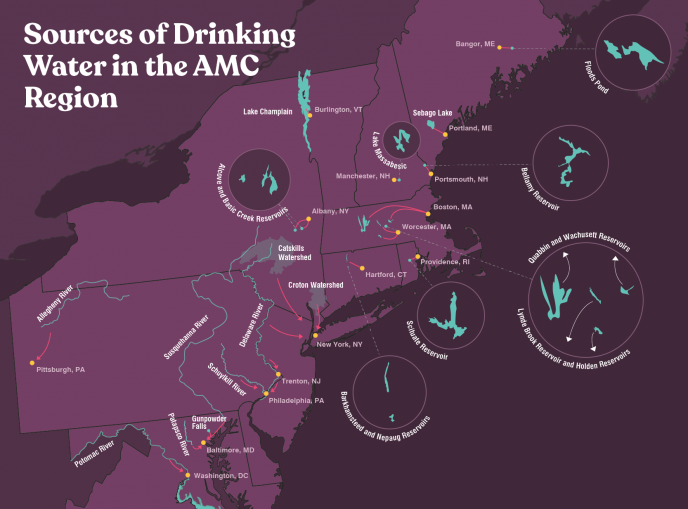 INFOGRAPHIC BY KATIE METZThe drinking water sources for most Northeast and Mid-Atlantic cities.

Say more about how the act relates to drinking water.

Drinking water supply is complicated. Some people drink water from reservoirs, some from rivers, and some from groundwater wells. All three benefit from the forests of the Highlands though. Everyone in the Highlands drinks almost entirely water that is locally sourced and exceptionally clean, mostly from wells. Downstream communities like Newark, N.J., have reservoirs in the New Jersey Highlands and they pipe that water down, and many major businesses rely on the clean water such as Anheuser–Busch and other food and beverage manufacturers. A lot of other communities pull water from the Delaware River—Trenton, N.J. and Philadelphia, for example—and the forested areas of the Highlands contribute clean water to the rivers that flow downstream. In warm, dry summer months, the springs of the Highlands provide even more clean water as a percentage of total flow in the rivers. The North Jersey District Water Supply Commission report found that $50 billion could be saved in water treatment costs over the next 50 years if the forests and streams of the Highlands region could be protected and provide clean water. The same story is true for southeastern Pennsylvania and Philadelphia, southern New York, and Connecticut. 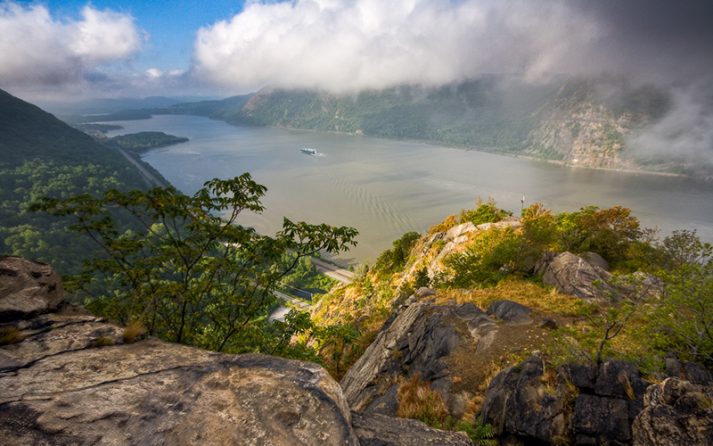 What are the recreational opportunities in the Highlands region?

The best recreation outside of the cities is in the Highlands. These include hiking, backpacking, camping and summer camps, the Stephen and Betsy Corman AMC Harriman Outdoor Center at Harriman State Park, downhill skiing, cross-country skiing, snowshoeing, wildlife watching, hunting, rock climbing, section-hiking portions of the Appalachian Trail and the Highlands Trail, spelunking, and even what is considered the most popular day hike in America: Breakneck Ridge.

You name it, the Highlands has it. The region is almost a strip of state and local parks, and the Highlands Conservation Act and other funding sources are helping to connect them all together.

What kinds of wildlife and plants do the Highlands support?

The bobcat, Indiana bat, bog turtle, brook trout, warblers, dwarf wedgemussel, and orchids like the ladyslipper and the wild Columbine, among others. 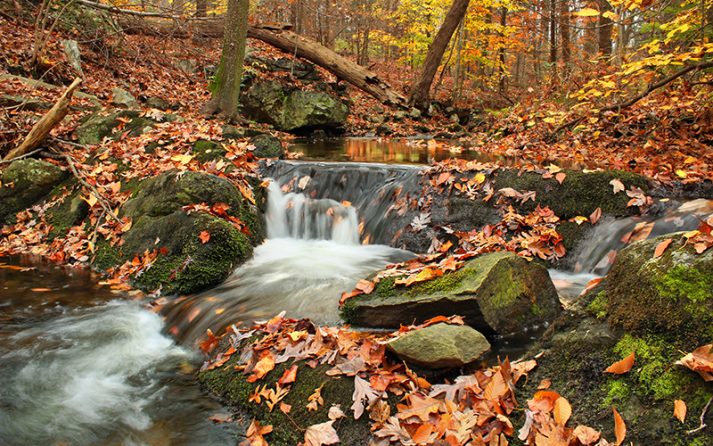 AMC is leading the push for HCA reauthorization in 2021. What updates will be made from the last bill? What will a successful campaign look like, and how can folks get involved?

In late January 2021, conservation champions in the House and Senate led the introduction of legislation to reauthorize the Highlands Conservation Act. When Congress creates programs and provides funding, they often establish the initiative for a specific length of time, allowing them to revisit how the program is working in the future. Since 2004, the Highlands Conservation Act has funded the protection of thousands of acres of new open space, but many lessons have been learned about how the program could better achieve its goals.

The Highlands reauthorization legislation is focused on bringing climate change science more front and center by looking to update the areas considered most important to protect with the best available science. The legislation is also going to allow the four states to use this science to adjust the boundary of the region, ensuring that habitat and forested areas connected and consistent with the Mid-Atlantic Highlands resources can be protected. The legislation will also seek to expand opportunities for other government agencies to be involved in more Highlands open space projects, and for nonprofit land trusts to be more involved as well. Finally, thanks to the success of the Great American Outdoors Act in fully and permanently funding the Land and Water Conservation Fund at $900 million, the reauthorization bill seeks to double the yearly funding to the program from $10 million to $20 million.

The Highlands Coalition, which AMC helps to lead, has mounted a campaign to ensure passage of the Highlands Conservation Act reauthorization bill before the end of 2021. Once the bills are introduced in the House and Senate, we will be asking all Members of Congress from the region to join the bills as co-sponsors and supporters, with many members already supportive and planning to be listed as original co-sponsors at introduction. Your support will be needed too. Join AMC’s Conservation Action Network to be alerted when your voice can make a difference. AMC will be sending out advocacy alerts to encourage you to speak up in support of the Highlands throughout 2021. Tens of thousands of supporters have helped advocate for the Highlands from before passage of the Act in 2004 and your voices will be needed once again.

The Highlands is the closest outdoor oasis to New York City and more than 25 million residents of the Mid-Atlantic. It is visited and loved by so many people, making it both threatened and cherished.