Four Strangers, One Passion, and an Inextricable Bond Through Hiking in the Northeast 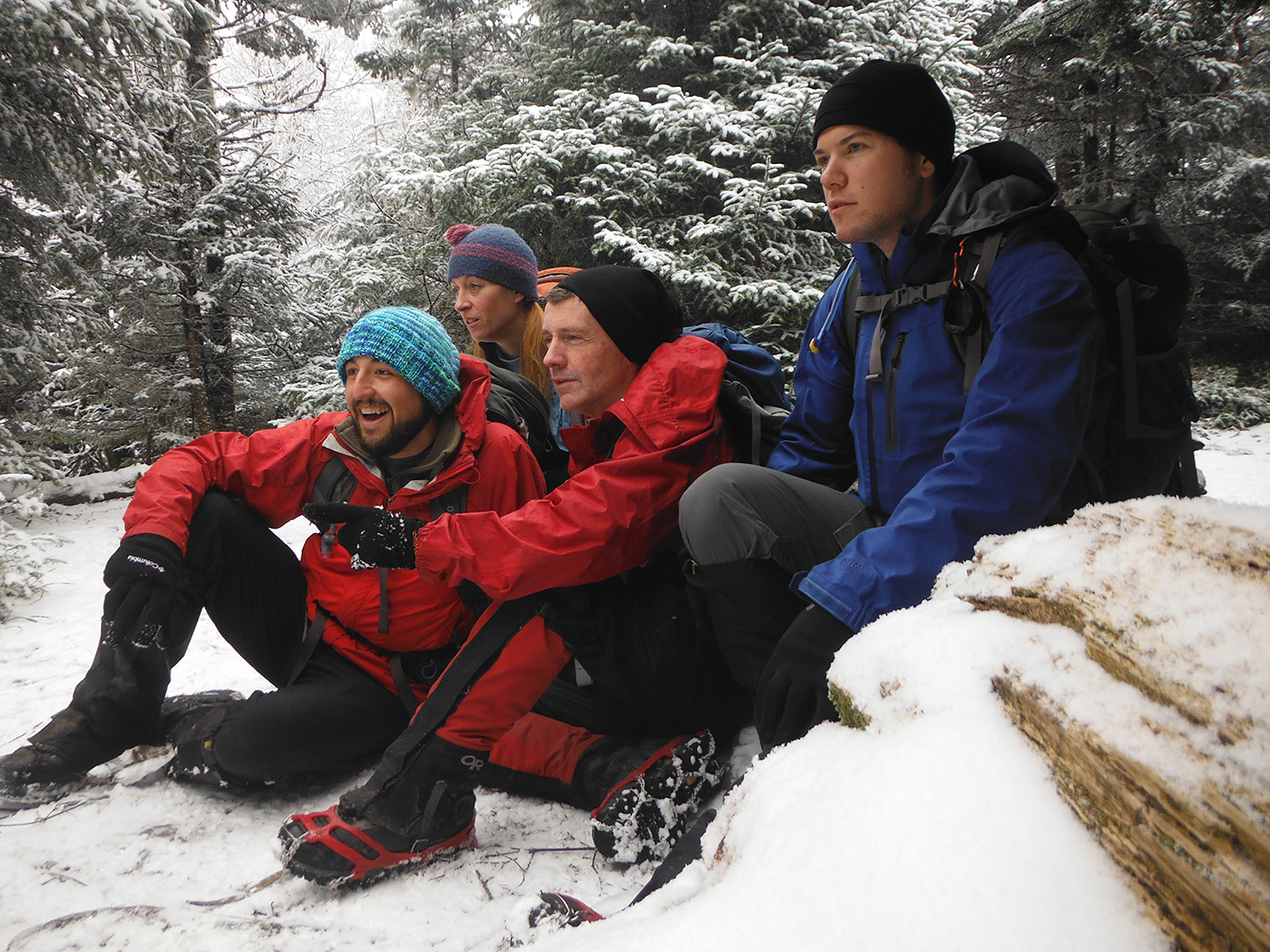 COURTESY OF RAY O'CONORThe author, Ray O’Conor (second from the right), sits with the three hiking partners with whom he became close friends through their many adventures together.

Some people come into our lives to rekindle our spirits, motivate, and inspire us. A dozen years ago, Alison Darbee, Joe Murphy, and I—three strangers in whom an interest in hiking and mountain climbing had blossomed—found ourselves at a trailhead in the Adirondack Mountains at dawn preparing to hike the Santanoni Range. It is a daunting task for experienced hikers, let alone three novices.

At first blush, we seemed to have little in common. That assumption would change as we learned more about each other on the trail over the ensuing 12 hours. Joe, a residence life coordinator at Skidmore College, was 25. Alison, an art teacher, was 10 years older than Joe. I was a banker and 30 years Joe’s senior. Two years later another twenty-something young man, Jon Laurin—an elementary school teacher with whom Joe was acquainted in college—would come into our lives on a forest trail during another meetup outing by chance (or fate). The four of us never imagined our lives would become inextricably linked.

As a quartet, trio, or in pairs, we have ascended more than 300 mountains. We have spent nights together in tents, lean-tos, and small-town motels. The warmth, comfort, and hospitality at AMC huts, as well as AMC’s Joe Dodge Lodge and Highland Center, have been welcome respite sites for us on our journeys.

We were spending so much time together, we eventually decided we should adopt a group name in the tradition of Appalachian Trail hikers earning trail names. On a brisk October morning in 2012 while hiking to North and South Hancock mountains in New Hampshire’s White Mountains, we kicked around appropriate (and a few inappropriate) names for our group. As we sauntered along the trail, Alison blurted out, “MOLD!” With that, MOLD Mountaineering Society—an acronym combining the first letters of our last names—was born.

It’s hard to say for sure what has kept us connected for more than a decade. Perhaps it is our shared goals to join the ranks of those who have climbed the Northeast 115 and the New England Hundred Highest. It could simply be a mutual love of being in wilderness.

Although we share common values and interests, on occasion the 30-year gap in our ages is evident. While traversing the Willey Range in New Hampshire’s White Mountains, a storm approached as we started the ascent of the final peak in the range, Mount Tom. Hearing thunder in the distance, we debated whether we could reach the summit and descend to the safety of the Highland Center before the storm’s arrival. “Is it over?” Joe lamented. I instantly responded, “Did you say over? Was it over when the Germans bombed Pearl Harbor?”

Joe shot me a confused glance, then charged ahead, leading us through the mud, roots, and rocks up to the summit. We spent only a moment at the peak for a photo before descending quickly as thunder cracked and rain poured. After returning to safety, Joe asked, “Ray, you know the Germans didn’t bomb Pearl Harbor, right?” With an incredulous stare I countered, “Joe, are you serious? You’ve never seen John Belushi’s speech in ‘Animal House?’”

It isn’t always fun and games on MOLD outings. There was a confrontation with a bull moose; a time or two we lost our way; falls into spruce traps; and cuts, scrapes, bruises, sprains, and other injuries. When assessing risk, we try not to cross the fine line between bold and stupid, but sometimes the line moves on you.

On the day that I hoped to complete the Northeast 115, Jon, Alison, and Joe accompanied me on a three-mountain traverse of Mounts Sugarloaf, Spaulding, and Abraham in Maine. The forecast was favorable, but as hikers know, fair mountain weather can turn foul abruptly. We summited Sugarloaf and Spaulding without incident, but heat and humidity grew throughout the day. On our approach to Mount Abraham, a storm rolled in. As we broke above the tree line, we heard rumbles of thunder and saw a bolt of lightning strike a mountain to the west. That prompted us to significantly accelerate our pace. We scrambled over the rocks to the summit, snapped a summit photo, and descended quickly.

Below tree line, we thought we were safe. However, the heavens suddenly opened, and we were pounded with hail stones ranging in size from peas to golf balls. We donned our jackets and pulled up our hoods, not so much to stay dry, but to mitigate the sting of the hail stones mercilessly pelting us. 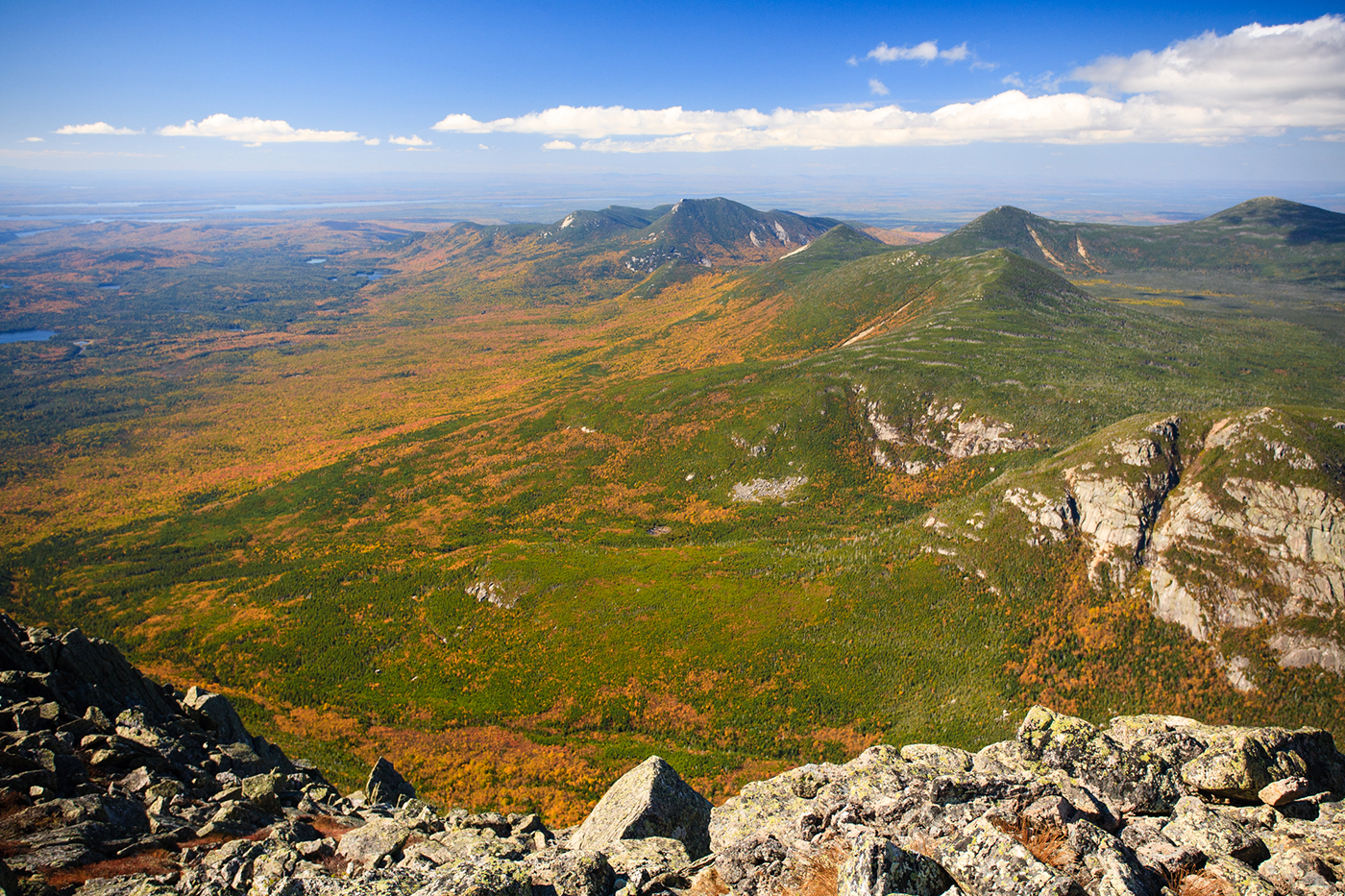 We traveled to northern Maine in the summer of 2019 to complete the New England Hundred Highest challenge, climbing the 100 tallest mountains in Vermont, New Hampshire, and Maine. We set up camp the night before in Baxter State Park for what we knew would be a long day crossing three mountains (Coe, South Brother, and North Brother) before beginning a bushwhack to Fort Mountain. The cool, crisp night air and the soothing sound of a nearby stream created the ideal environment for a good night’s rest. An early rise had us on the trail shortly after dawn.

The steep ascent up Mount Coe challenged us, as sections of the rockslide route were treacherously slick. As we approached Coe’s summit, we marveled at the superb views of Mount Katahdin, Maine’s highest peak. The wooded, well-maintained trail from Coe’s summit to South Brother’s peak was gradual and pleasant. What followed was a very steep ascent to the apex of North Brother, the launch point to Fort Mountain.

Fort is one of a handful of trailless mountains in the New England Hundred Highest. Jon led us, thrashing through a thick maze of trees, brush, and blown-down trees. Our bare arms and legs were nicked, scraped, and cut as we rumbled and stumbled along. While some call this rarely trodden upon course a herd path, Jon coined the phrase herdwhack to describe it. Hurt path might be a more accurate characterization, though.

There was some hesitancy during the final approach to the summit. It marked an end to another epic journey for the four of us. However, as we broke through the tree line and crossed Fort’s rocky ridge to its peak, hesitancy was replaced by awe. Standing atop Fort, hundreds of miles of natural beauty surrounded us. Neighboring peaks pierced the sky. Deep blue pristine lakes, with surfaces as smooth as glass, lay below. There is always a bit of magic in the mountains and a sense of feeling so small in such a vast wilderness.

From our homes near Saratoga Springs, N.Y., we’ve driven thousands of miles along highways and country lanes, as well as rough and occasionally impassable dirt roads through Vermont, New Hampshire, and Maine. Occasionally, washed-out bridges or roads have altered our route. We’ve shared hundreds of miles of trail and tens of thousands of feet of elevation gain and loss.

Earlier, I described our foursome as inextricably linked. I suppose you can’t be more closely linked than Alison and Jon, who are now married. Joe was the officiant at their wedding. Seldom is any worthwhile goal achieved alone, and it is most gratifying when accomplished as part of a team. There is an old adage: Get lost in nature and you will find yourself. We four adventurers not only found ourselves in the wilderness but found friends in whose hands we entrust our lives.

Ray O’Conor is an author, screenwriter, CEO of a community development organization, and long-standing AMC member.