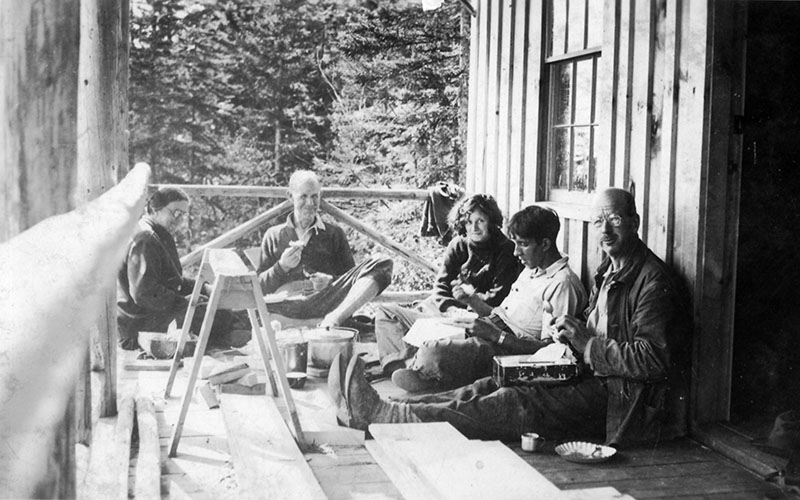 AMC LIBRARY & ARCHIVEVolunteers with AMC’s New Hampshire Chapter sit for a meal while building the High Cabin at Mount Cardigan in 1931.

Editor’s note: This year marks the 100thbirthday of three AMC Chapters: Connecticut, Narragansett, and New Hampshire. In this post, Robert McLaughlin—New Hampshire Chapter member and editor of its Mountain Passages newsletter—offers the fascinating history of the AMC’s Chapter in the Granite State.

The Appalachian Mountain Club was founded in 1876. About 30 years later the first section, or what we’d now call a Chapter, was organized. In 1904, a group of AMC members in New York State formed the New York Section, which was officially recognized by the Club in 1912. Several additional Chapters formed in the years that followed: the Massachusetts Chapter in 1918, followed by the Narragansett, Connecticut, and Merrimack Valley in New Hampshire Chapters in 1921.

The official start of the New Hampshire Chapter fell on one of three possible dates. On May 24, 1921, an organizational meeting was held in Boston that voted to create the Chapter and join it to the AMC. Three weeks later, on June 14, the AMC Council voted to accept the Chapter into the Appalachian Mountain Club. Finally, the first Annual Meeting of the Chapter was held on Tuesday, December 6, 1921, to complete its organization. While controversy exists as to which date is the actual date of creation of the Chapter, the year was undoubtedly 1921—making 2021 the Chapter’s 100thanniversary.

But what constituted the Chapter that was created in 1921? As initially conceived, the Chapter included only Rockingham, Merrimack, and Hillsborough Counties. AMC members in these counties were automatically members of the Chapter, and members in other parts of New Hampshire could request membership in the Chapter. 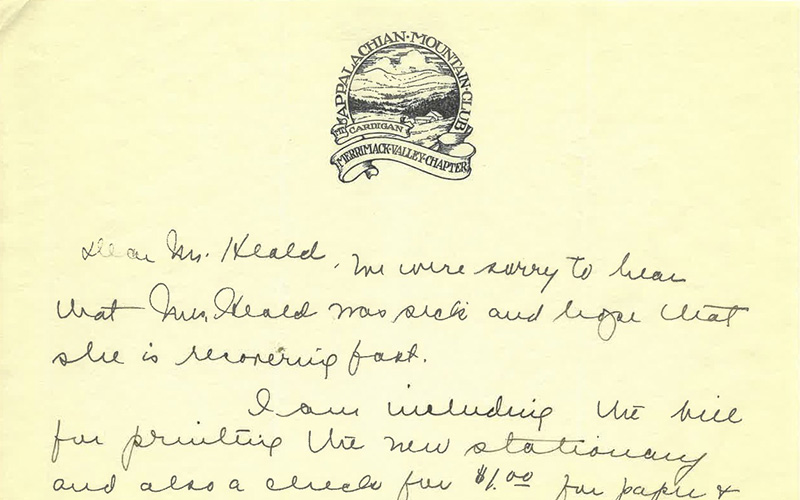 In 1941, Rockingham County withdrew from the Chapter, and then in 1954 Belknap and Sullivan Counties were added.

1956 was a year of crisis. The Merrimack Valley in New Hampshire Chapter could not find a candidate who was willing to serve as its chair, and serious consideration was given to dissolving the Chapter. However, the members of the Chapter and AMC decided that the Chapter was needed, and Florence W. Henderson stepped forward and accepted the position as Chair.

Following this “near death” experience, the Chapter expanded its boundaries to include the entire Granite State and changed its name to the New Hampshire Chapter. The Chapter finally took on its current form.

Not surprisingly, the Chapter focused on hiking from its start. The initial outing was on Memorial Day Weekend, 1921, to New Boston, N.H., to climb Joe English Hill and visit local attractions. You can still climb Joe English Hill—an easy, 2-mile round-trip hike with 500 feet of elevation change—and retrace that first Chapter hike. The trip report detailed the weekend’s activities:

Sunday, the 29th, most of the party climbed Joe English Hill from which were had some very fine views. A strenuous descent on the steep south slope to the meadow below was rewarded by an appetizing lunch eaten beside the brook. Monday forenoon short walks were taken. In the afternoon a soldier’s memorial was unveiled and dedicated . . . .  The party then departed for home motoring as far as Goffstown and Manchester. 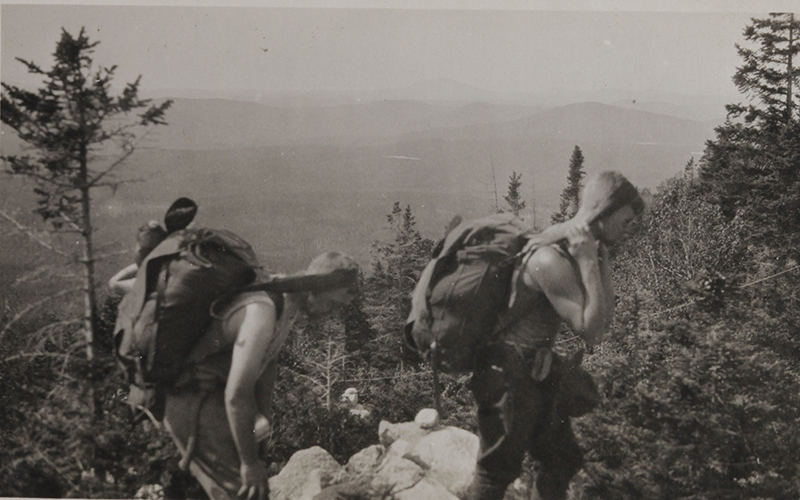 Initially, Chapter hikes tended to focus on local destinations in Southern New Hampshire where the trailheads could be reached by train or trolley. In the first few years, trip reports described trips to Ragged Mountain, Mount Cardigan, the Uncanoonuc Mountains, and the Pawtuckaway Hills. Additionally, the Chapter sponsored “a series of afternoon walks on either Saturday or Sunday of each week.”

Most outings were scheduled over a weekend to accommodate the time-consuming travel to the chosen destination. The parties stayed in local hostels and ventured into the woods and to summits during the days. The trip reports describe spectacular views and pleasant outings, but also include descriptions of hikes in the rain and the fog. Some things never change!

Not all of the trips were in the warmer months. In 1923, a series of snowshoe outings were scheduled visiting Devil’s Den near Lake Massabesic, the Belknaps, and the area around Concord. In 1923, Chapter members took a five-day outing on Washington’s Birthday to the The Cobb House in Canaan, N.H., with the first recorded trip to Mount Cardigan by the Chapter.

With the advent of more common automobile transportation, the Chapter ventured farther afield and day trips became possible. Destinations became more aggressive.  Mounts Moosilauke, Cardigan, and Kearsarge, as well as the Belknap Range, appear in the trip reports. However, Chapter outings seldom ventured into the White Mountains until later.

Just as now, the Chapter activities were not all hiking.

In June 1930, the Chapter sponsored a canoe trip on the Contoocook River which covered 15 miles in the course of the day—with time for a picnic.

The Chapter also worked on trail improvement and creation. In May 1924, the Chapter voted to cut a trail on the east side of Mount Cardigan from Alexander, N.H., to the summit. This trail, the Manning Trail, was cut in 1925 and named after the brothers Robert and Charles Manning, Chapter members, who were killed in a train accident during a snowstorm while hiking near Glencliff. Other trails followed including portions of the Appalachian Trail and the Monadnock-Sunapee Trail.  Again, trail work continues to be a major focus for Chapter members. 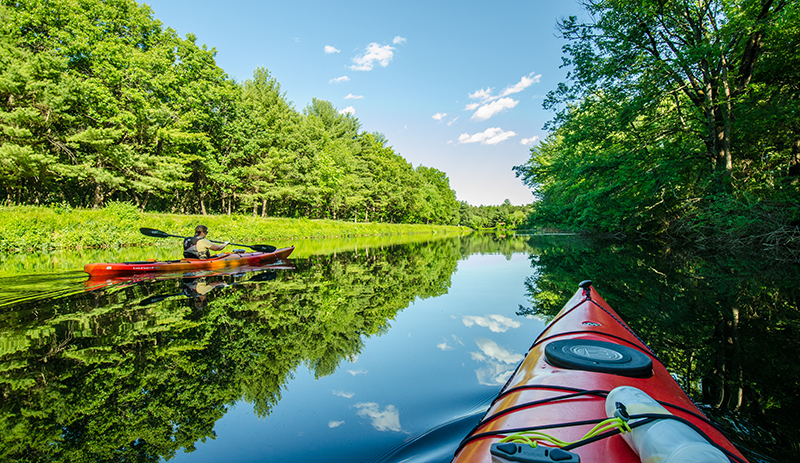 ROY RUMBAUGH / AMC PHOTO CONTESTNew Hampshire Chapter members are just as active today as ever—hiking, cycling, and paddling throughout the Granite State, and beyond.

In 1929, the Chapter took on a new project building the cabin near Cardigan’s summit. This cabin, now known as the Hi Cabin, was completed in 1931 and is just 400 feet below the summit. The Chapter operated the Hi Cabin for eight years before turning its management over to the AMC, which continues to operate it as part of AMC’s Cardigan Lodge today.

The New Hampshire Chapter’s 100thAnniversary provides an opportunity to remember what has been achieved over the century and to look forward to what will is to come over the next 100 years.