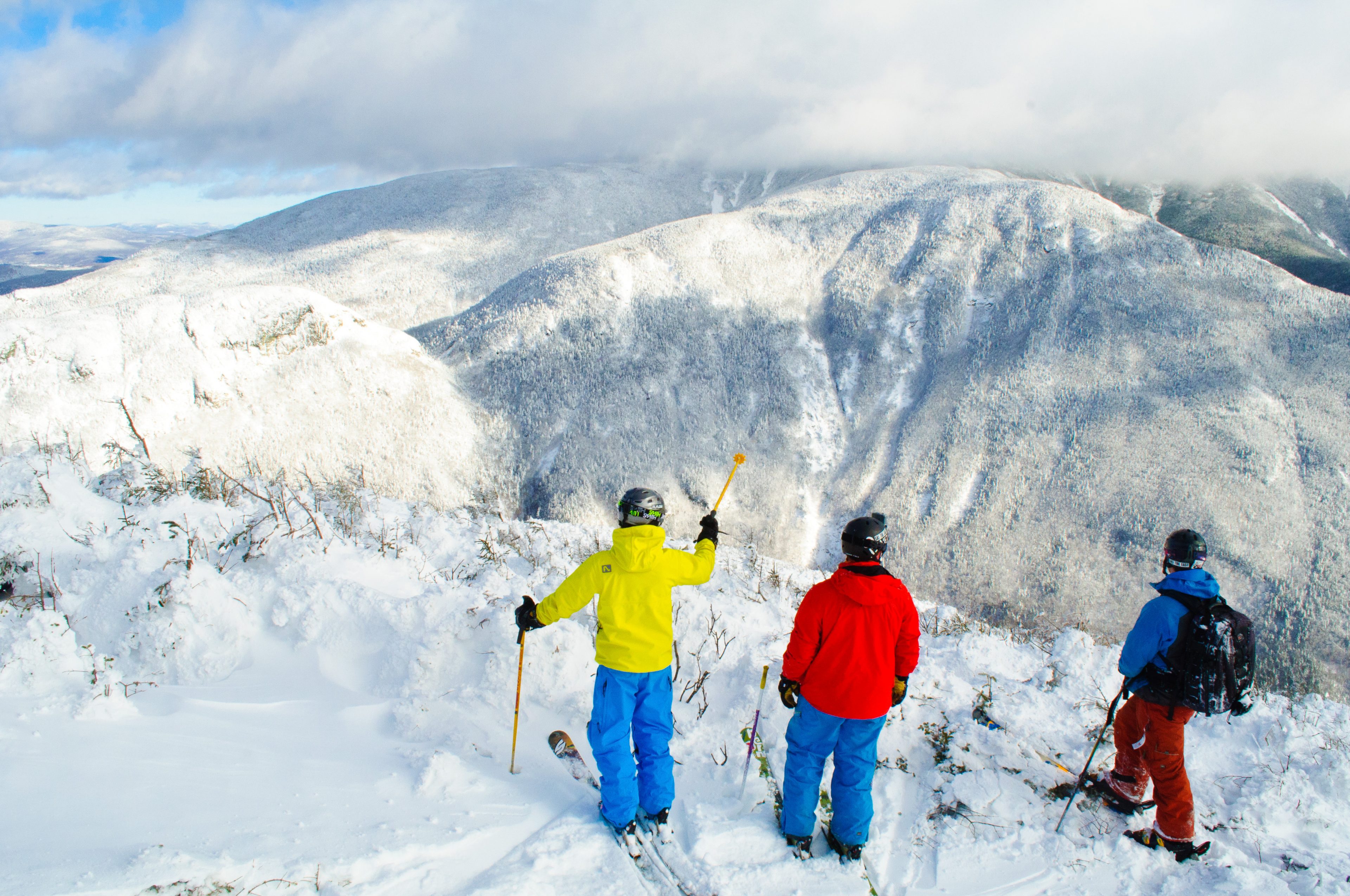 The economic viability of New England’s winter sport industry, though, relies on cold, snowy winters. In a 2018 paper titled “Confronting our Changing Winters: Indicators of Winter Climate Change in the Northern Forest,” researchers at the Hubbard Brook Research Foundation, University of New Hampshire, University of Winnipeg, University of Maine, and AMC—including director of research Dr. Sarah Nelson—reported that Northeast winters are getting shorter and less snowy. A second paper from some of the same researchers found that these warmer, dryer winters are now punctuated by more frequent “whiplash” thawing and refreezing events.

Northeast winters are warming three times faster than summers, according to a 2014 study published in Climatic Change, and winters in Concord, N.H., are 5.6 degrees warmer in 2019 than they were in 1970.

Georgia Murray, AMC staff scientist studying winter weather in New Hampshire, explains that warmer winters, less total snowfall, and more frequent “whiplash” events—where winters fluctuate between sudden freezes and thaws—all influence the ski industry. Referencing the research done by Nelson and others, Murray says that the number of snowmaking days before December 25 are decreasing, as are the number of snowmaking days before February 28. This means that the number of days with ideal snowmaking temperature is shrinking.

Add to that presence of vegetation on ski trails deeper into the winter and a declining snowpack depth, and you have a recipe for trouble within the industry. “These ski resorts,” says Murray, “are going to be impacted by warming.”

These changes can wreak havoc on ski resorts’ environments and economies. Drs. Elizabeth Burkowski and Rebecca Hill, professors at the University of New Hampshire and the University of Colorado, respectively, studied the economic impact of climate change on the winter ski and sport industry for the nonprofit advocacy group Protect Our Winters. Their 2018 study, titled “The Economic Contributions of Winter Sports in a Changing Climate,” reported that the winter ski and sports industry accounted for 191,000 jobs across the country, generated $6.9 billion in wages, and added $11.3 billion to the nation’s economy in 2016. Nationally, the lowest annual snowfall years reported between 2001 and 2016 resulted in 17,400 fewer jobs per year in the winter sports industry—defined in the study as tourism driven by winter recreational activities, especially resort downhill skiing. During these low snowfall years, the value that winter sports and tourism added to the economy decreased by more than $1 billion, on average. Hill, the primary economist on the report, says the bad snowfall years affect “thousands of people” and touch “businesses like restaurants, convenience stores, and coffee shops.” 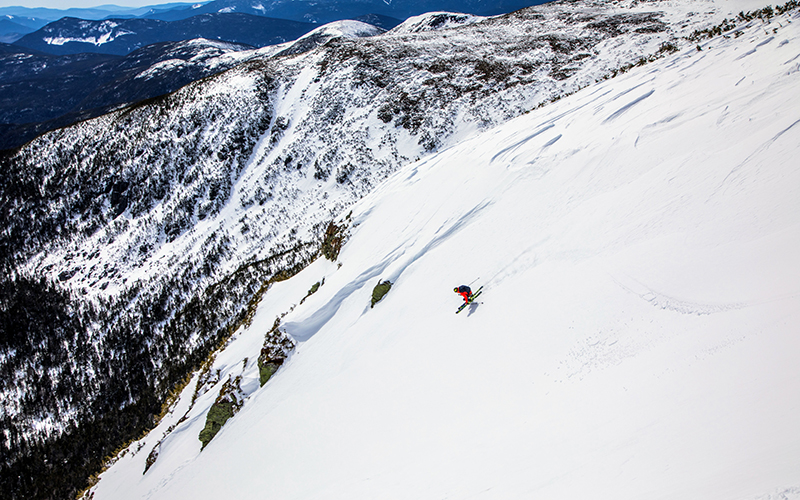 Drummond’s Mountain Shop is just across the road from Bretton Woods Market and Deli. Owner Jim Drummond walks me around his store, telling me about life by Bretton Woods Ski Resort. He opened Drummond’s in 1993, selling and renting skis, snowboards, and ski apparel. Some winters are definitely tough, he said, but you “take the good with the bad.” At the start of each winter, he commits to employ all his employees through the end of the season, and always honors that commitment, even in slow winters, he says.

Drummond is aware of the mountain’s importance to the economy of the town, which, aside from Drummond’s and the Bretton Woods Market and Deli, supports the 118-year-old Mount Washington Hotel, as well as other restaurants, shops, and hotels scattered along Route 302. “It trickles down to everybody in the area,” he says. During slow winters, he adds, “people stop hiring, and people work less hours.” 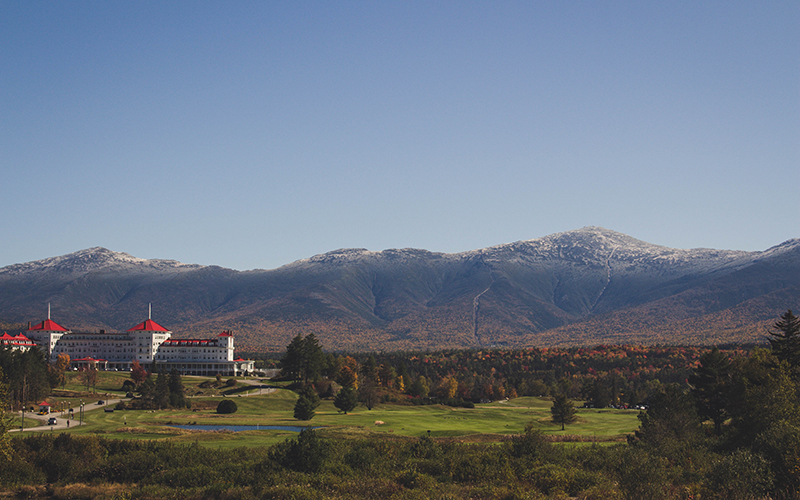 Drummond, like Bryant, acknowledges the reliance the economy had on the ski mountain. He says, specifically, that skiing is a big part of New Hampshire’s economy.

Toward the end of our discussion, Drummond emphasizes Bretton Woods’ snowmaking capabilities. He says that now, so long as it’s cold enough, they can make enough snow for the big trails. As he sees me off, he leaves me with a smile and a parting message: “thank goodness for snowmaking.”

Down Route 302 at Bretton Woods Ski Resort, Karen Johnson holds the door to the stairs for me. Johnson had been working for the resort in its various lodges since she moved to the area from New Bedford, Mass., 12 years ago. According to her, it’s the only job that pays her rent. When the resort suffers, so does she. We sit at one of the picnic tables just inside the lodge, and she tells me about one season when the resort closed early. “We closed in March,” she tells me. “It might have been 2011 or 2010, we had a really warm spring, and I remember one of the managers coming up to me and saying, ‘That’s it, we’re closing.’” In a typical year, the lifts are still humming through mid-April. While looking for another job that year, Johnson said she found out the resort was the only place that could pay her enough to afford rent.

Bretton Woods isn’t alone. Dr. Rachel Cleetus, policy director for the Union of Concerned Scientists, says climate change is affecting winter recreational economies across the region. “The seasonal cycle is one of the iconic pieces of the Northeast. Climate change is profoundly altering that,” she says.

For the ski industry specifically, the declining snowfall in the early part of the season effects how visitors are going to choose where to ski, and an increase in huge dumps of snow can put a strain on infrastructure that is important for the ski industry, she says.

Additionally, poor snowfall years can push dollars to other regions of the country. Cleetus says the Northeast saw this in 2017 when it had “better conditions than out west,” pushing tourists and dollars east. But the inverse happens as well, she says.

Tertia Cote manages the Nordic Inn rental program in Lincoln, N.H., just across the Pemigewasset River from Loon Mountain. She says weather is the “deciding factor” between a good year and a bad year. “The weather affects us all year, and if there’s no snow on the mountain people will go elsewhere,” she says.

Danielle Avery, manager at Lincoln’s Encore Thrift and Coffee Shop, echoes Cote’s sentiment about low snowfall years. “It usually takes a little while for people to realize the ski conditions aren’t good, but eventually they peter off,” she says.

In Gorham, N.H., Tom Spaulding, manager of The Glen House, says that when conditions are poor, more than just downhill skiing suffers. “Not only do we have downhill but also 45 miles of cross-country ski trails,” he says. “With limited snow-making ability, the cross-country trails are often hit the hardest.” 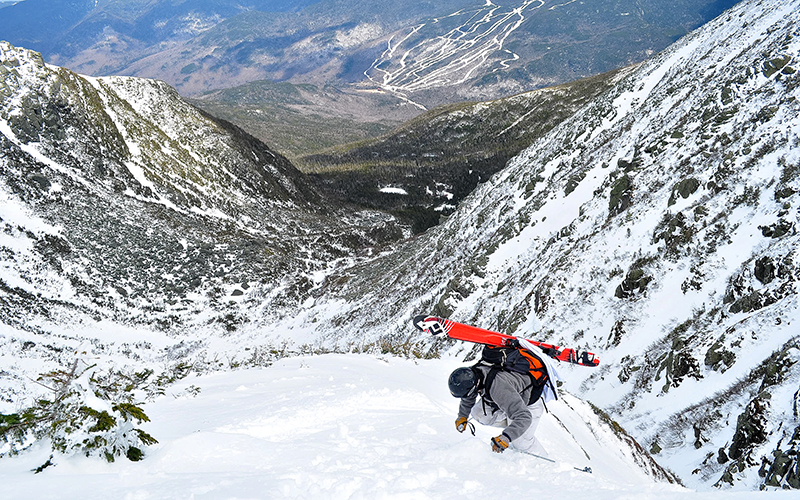 Tim Fater / AMC Photo ContestTuckerman Ravine remains a popular destination for backcountry skiers because of its ample snowpack through the winter and early spring.

To a lesser degree than the big resorts, backcountry skiing also brings tourists and their dollars to New Hampshire each winter and is experiencing something of a boom amid the global pandemic. It’s also affected by the warmer winters and less frequent snowfalls associated with climate change.

The Granite Backcountry Alliance (GBA) is an organization dedicated to providing low-impact backcountry skiing opportunities in New Hampshire and Maine. During the 2018-2019 season, the GBA completed a “Visitor Spending Profile” for three of its backcountry zones. The report found that those three zones were visited more than 9,000 times between December and April. These 9,000 visits, according to the study done in partnership with SE Group, brought in $954,000 in sales activity and $120,100 in tax revenue.

Because of COVID-19, and despite irregular weather patterns, experts predict backcountry skiing participation to continue to increase this winter season. COVID-19 protocols at the bigger resorts created a “second surge” in New Hampshire backcountry skiing in 2020, according to Tyler Ray, who founded the GBA in 2016. “People don’t want to sacrifice their ski season, so they will move to backcountry,” he says, adding that many outfitters have “basically sold out” of all their backcountry ski gear.

On the climate, Ray also notes that a key characteristic of a backcountry skier is an understanding of the ebbs and flows of weather. He points out that many backcountry skiing areas, like Tuckerman Ravine, are at very high elevations. Those, to his understanding as a skier, have been affected far less by the warming climate. “Down lower in the Valley and in our lower elevation glades, weather is more capricious, and comes quite inconsistently, but it is difficult to comprehend in a small sample.”

To an alarming degree, the future of New England’s ski industry—and the local economies it supports—is very much in question as a result of climate change. Many towns in the Northeast have economies tied, at least somewhat, to the viability of winter sports and the quality of the winter—namely, ample and predictable snow. As the climate changes, however, and winters warm, that viability is being altered. For now, at least, locals remain optimistic. As Jim Drummond said, “thank goodness for snowmaking.”