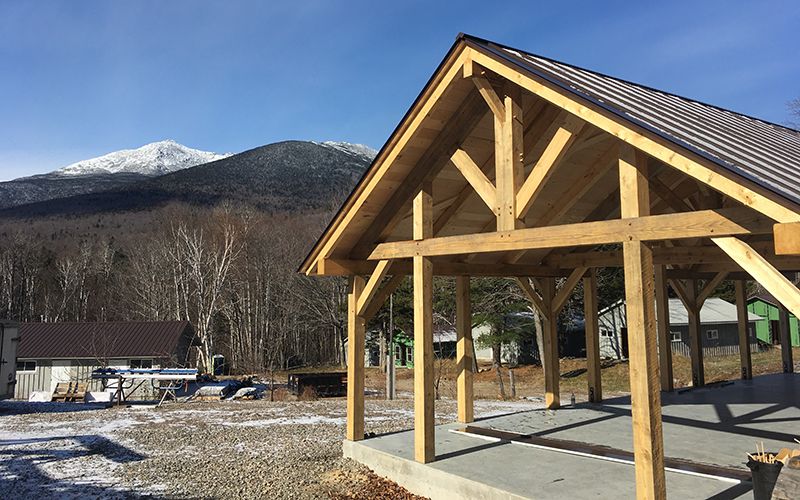 Chris FithianLocated on U.S. Forest land, AMC’s Camp Dodge is the starting point for much of the trail work that goes on in the White Mountains.

AMC’S century-plus commitment to maintaining hundreds of miles of recreational trails in the East has received a big boost with the renovation of the Camp Dodge Trails Training Center, which closed in 2017.

Located four miles north of Pinkham Notch Visitor Center on Route 16 in New Hampshire, Camp Dodge has been a hive of trail stewardship activity since the Civilian Conservation Corps (CCC) erected 15 buildings on the site in 1935 as part of Franklin D. Roosevelt’s New Deal programs. At the start of World War II, Civilian Public Service housed conscientious objectors, providing alternative work in exchange for military service; the U.S. Army used the property to test cold-weather gear for the Korean War around 1950; and the Youth Conservation Corps (YCC) occupied the property from 1974 to 1982, naming it Camp Dodge after former AMC huts manager Joe Dodge.

In 1982, AMC began leasing Camp Dodge from the U.S. Forest Service through a special-use permit to house its trail crews and volunteers. For nearly four decades, Camp Dodge has been the seasonal home to AMC’s White Mountain Volunteer Trail Crews, a mustering point for AMC’s trail adopter program, and the short-term base for many outside volunteer groups. All those boots passing in and out of Camp Dodge took their toll, however.

“There was an evident need for refurbishment of the buildings,” says Amanda Peterson, AMC’s Camp Dodge training center coordinator. “Some buildings were to the point that if there wasn’t renovation, they wouldn’t be usable in the near future.”

The updated Camp Dodge, funded in large part by a lead gift from the Highland Street Foundation, is expected to be completed just in time for the anticipated return of seasonal trails staff and volunteers to the White Mountains. The renovation not only expands AMC’s capacity to build and maintain recreational trails and backcountry campsites, but will also create a regional hub where all land managers, trail organizations, and volunteer stewards can come together to learn and share best practices, Peterson adds. For one, a new Welcome Center and office space greets visitors to Camp Dodge, a “more obvious arrival point” than what had existed. Four bunkhouses now include beds for 16 people each. Another four new dormitory buildings replace the canvas tents used for decades, providing housing for AMC staff and Forest Service and partner organizations.

The newly constructed Hutton Lodge will house AMC’s White Mountain Professional Trail Crew, and AMC’s backcountry campsite caretakers continue to enjoy living space on the property. (Both crews’ tools will be moved to Camp Dodge from Pinkham Notch and stored in a brand-new shop and tool bay.) Two bathhouses with accessible showers and restrooms have been built to serve all staff and guests staying overnight, while a modernized kitchen and dining hall vastly improves AMC’s food service capabilities, Peterson says.

Convening and training volunteer trail maintainers, like the more than 200 trail adopters in the White Mountains, will remain a central focus at Camp Dodge. The Highland Trails Training Center is a covered outdoor pavilion for training activities and outdoor meals, “with spectacular views of the Northern [Presidential Range],” Peterson says. Peterson, whose role includes coordinating the training opportunities at Camp Dodge, says she’s most excited about the ways in which the space will strengthen AMC’s connections with the Forest Service—which granted AMC a 30-year special-use permit—and trail stewardship organizations from throughout the Northeast.

“We love that we’re going to be a place where lots of synergy can happen for trail work around the region,” she says.