Understanding Flotation: What Snowshoe Size Do You Need? 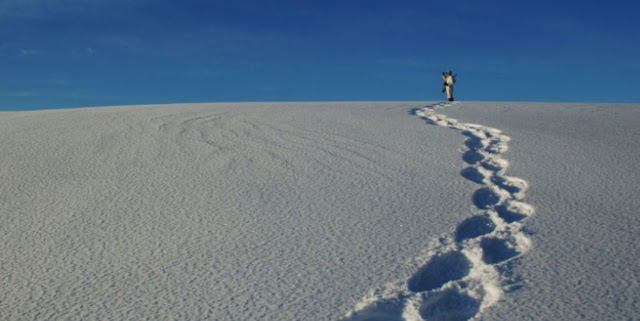 Spoiler alert. Strapping on a pair of snowshoes does not give you the power to skim magically across the surface of the snow like you’re walking on frozen water. Snowshoes just reduce how deep you sink, a feature known (somewhat misleadingly) as “flotation.”

The exact equation for how much you sink—er, float—depends on three basic factors: the snowshoe size, your weight, and the density of the snow.

First, most snowshoes are sized by length, with most running somewhere between 22 and 30 inches long, and the longest reaching up to around 36 inches. As a general rule, the longer the snowshoe, the greater its surface area and corresponding flotation. Longer snowshoes, however, are also heavier and somewhat more awkward underfoot, especially on steep or uneven terrain—two significant drawbacks.

Second, how much you weigh has a direct effect on how much you sink into the snow. (Or more specifically, how much you and your clothes and your loaded backpack all weigh together.) Most snowshoe styles feature a recommended weight range for a given length. This range can span as much as 100 pounds (for example, the 30-inch Atlas 1030 snowshoes list a range of 150 to 250 pounds), and usually overlaps with adjacent sizes (the 25-inch Atlas 1025 snowshoes range is 120 to 200 pounds).

Given this overlap, you should choose the length that best applies to the conditions you most commonly encounter on your winter snowshoe trips. For example, choose longer snowshoes if you travel over deep, untracked snow in gently rolling terrain and/or carry significant loads on your back; and shorter versions if you are more likely to be tackling hard-packed snow over more challenging terrain.

Lastly, the density of the snow underfoot has a marked impact on how deeply you sink. You’ll tromp deeply, for example, through the fluffy, puffy snow that forms and lasts in sustained sub-freezing temperatures; but stay closer to the surface in the denser, wetter snow that develops closer to the freezing mark and during repeated freeze-thaw cycles (the more common variety in the Northeast).

It’s worth noting that a few snowshoe styles, notably those from MSR, can be fitted with optional tails that attach to the rear of the snowshoe for additional length and flotation—a nice feature if you visit a variety of terrains and conditions over the course of the season.