Who Makes the Best Synthetic Down Insulation? 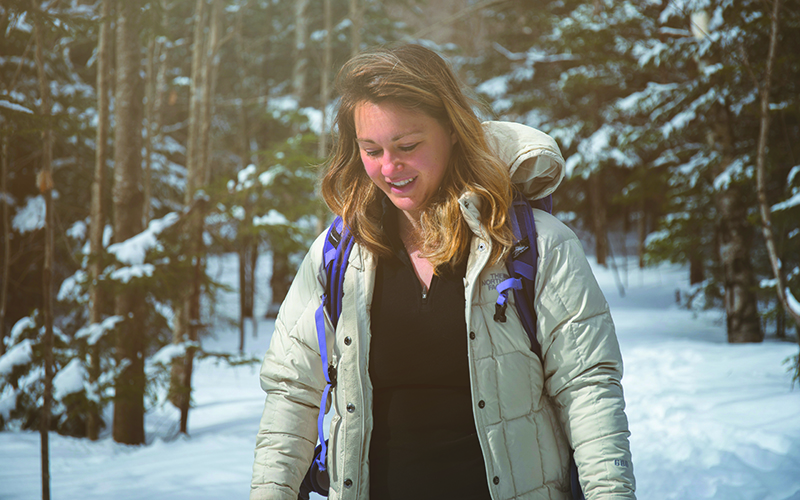 Paula ChampagneReplicating the same insulation as authentic down is tricky, but more companies are developing the best synthetic down for cold-weather adventurers.

Down is a miracle material, one of the few natural fibers that science and the outdoor industry have yet to fully replicate in synthetic form. That doesn’t mean companies aren’t trying to evolve and slowly improve synthetic down options, including the releases of several new breakthroughs. As temperatures dip in the coldest season, here are the latest innovations—and considerations.

Why are down’s properties so difficult to mimic? Simply put, the microscopic structure of goose down is too intricate to re-create with today’s technology. Zooming in on a single strand, or fibril, of a down cluster reveals thousands of teeny-tiny barbs and hooks, each of which measures barely 10 micrometers long, or roughly half the width of a human hair. These barbs enable the fibrils to interlock and create an extensive honeycomb of dead air spaces that provides down’s remarkable insulating ability. Down is also incredibly lightweight and compressible for the amount of warmth it provides. With proper care, it can last for decades with little to no loss of warmth.

Down is expensive and has gotten even more so in recent years due to surging demand and a decline in production. What’s more, harvesting down often involves some degree of animal cruelty, notably the plucking of down from live animals—although an increasing number of manufacturers are now sourcing ethical down, and recycled down is also available. Finally, and most significantly from a performance perspective, unlike synthetic insulations, down rapidly loses its insulating ability as it gets wet. Recent innovations have created a range of water-resistant down options, but even these are vulnerable in truly soaking conditions.

If you’re looking for a decent synthetic alternative to down, a few notable options are currently available that start to approach down’s remarkable properties and warmth-to-weight ratio.

Patagonia has developed a proprietary insulation known as PlumaFill, which features a fuzz of microfilaments that twist out from a central continuous fiber; the company claims PlumaFill is 40 percent warmer for its weight than other popular synthetic insulations. It is used in the ultralight Patagonia Micro Puff jacket and hoody ($249 and $299, respectively; both weigh less than 10 ounces).

PrimaLoft offers its ThermoPlume insulation, composed of individual, sail-like fibers that offer a warmth-to-weight ratio comparable to 550-fill down. Multiple companies now incorporate ThermoPlume into their product lines, including Mammut, Millet, and Land’s End. PrimaLoft also produces a hyper-warm insulation known as Gold Insulation Aerogel with Cross Core. Although it lacks the loft of down, it includes aerogel, a NASA-developed super-insulator that provides exceptional warmth for its weight. (It’s the lowest-density solid material that exists.) You can find it in L.L.Bean’s Packaway Hooded Jacket ($169-189), among other products.

Also of note is the rise of down/synthetic blends, such as Columbia’s TurboDown, which combines layers of down and synthetic insulation. This helps reduce cost and mitigates moisture risk while still providing some of the advantages of both materials.

As a general rule, synthetic insulations rarely, if ever, sustain their warmth and loft over the long term. Through use and abuse, they get less puffy, less warm, and just don’t hold up as well over time as down. Not enough years have passed to evaluate the longevity of the latest synthetic down options: It’s possible they’ll endure, but there’s no guarantee yet this will be the case. Synthetic down insulation, like all synthetic outdoor products, is also difficult to recycle, but Patagonia, The North Face, and other companies have started gear take-back and recycling programs.