When to Turn Back While Hiking: 5 Clear-Cut Situations 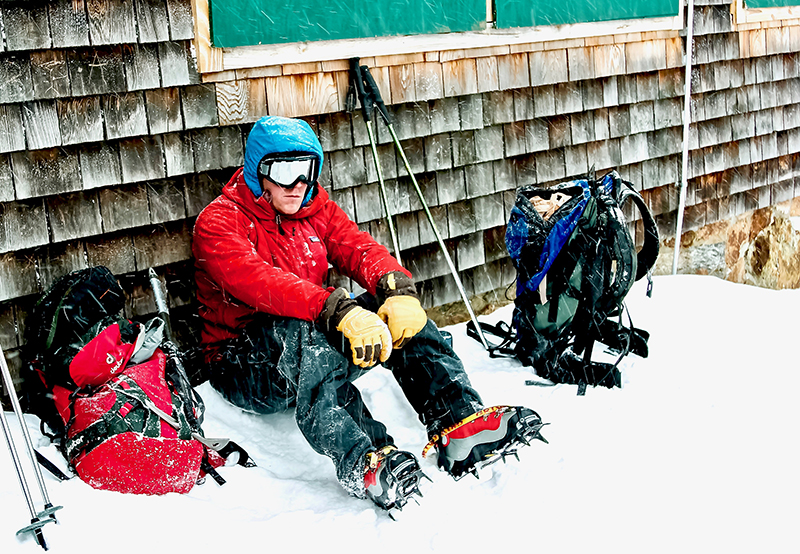 Matthew Grymek/AMC Photo ContestWondering when to turn around while hiking? Don’t be a hero. Do practice good sense.

Getting home safely while winter hiking means knowing when to call it quits. The mountain, the trail, the journey: They’ll all still be there another day.

A responsible hiker sets a turnaround time before hitting the trail, especially in winter, when daylight fades much earlier than other times of the year. But there are also conditions when you should turn back before your intended time. Emily Davenport, an AMC outdoor guide based at Pinkham Notch Visitor Center in New Hampshire, has seen her share of such situations and offers some tips on when it’s best to make that decision, especially in winter.

1. IF THE WEATHER CHANGES


We’ve all been outside, enjoying the day, only to have the blue sky eclipsed by dark, ominous clouds. This can be annoying on the trail in summer. In winter, it’s genuinely dangerous.

“Mountain weather can turn on a dime in any season, but winter can have extreme consequences,” says Davenport, who has been guiding trips for AMC for five years. “Knowing when to turn around if the weather turns can save lives.”

She recalls one instance when she was on a snowshoe trip in the White Mountains that was interrupted by a snow squall. “Visibility became less and less, with snow accumulating quickly,” she says. “I soon realized that my tracks would be covered and that visibility would be lowered, and it would be harder to see trail markers, like blazes and cairns. I opted to turn around.” The moral: Even pros turn back when visibility decreases.

2. IF YOU SUSTAIN AN INJURY


This is an easy one. Or is it? Newbies know to pack it in when they turn an ankle or wrench a knee, but for more experienced hikers, a minor mishap might not be worth forfeiting the hike. But as Davenport points out, a minor injury can prove problematic in winter conditions.

“Even small injuries can have life-or-death consequences in the winter,” she says, listing cold extremities and slips, trips, and falls as examples. Small injuries become problems when they slow you down or cause you to stop all together and, in the winter, could lead to bigger problems. Freezing hands and feet may be the early stages of frostbite or hypothermia. “Hypothermia can be difficult to detect in yourself,” she says. “But even mild hypothermia can rapidly get worse, so turn around as soon as possible.”


An unexpected dunk in an ice-covered stream would send anyone home. But what about when only your feet go through? “It’s almost impossible to fully rewarm, especially if you have soaking wet boots,” Davenport says.

Another common issue is hikers getting soaked simply from perspiration. “Going uphill, people generate a lot more heat and sweat, especially if we are snowshoeing through deep snow,” Davenport says. “If we stop for breaks or begin to descend downhill, we stop generating that heat, and our sweat cools extremely quickly, keeping us cold and wet in our base layers. If you find yourself soaked with sweat, change into dry layers or turn around as soon as possible.”

4. IF YOU HAVE THE WRONG GEAR FOR THE TERRAIN


Weather and terrain can be dramatically different from the start to the end of a winter hike, placing real challenges on gear. You wouldn’t want to cross an ice field in hiking boots without traction, for example. You may be able to make it up an ice-covered slope, leaning in, but things change dramatically when gravity begins to push you downhill.

“We see this all the time, as people try to hike Mount Washington in the winter,” Davenport says. “Most start out just fine with MICROspikes or snowshoes, depending on the below-treeline snowpack, and then as they ascend in elevation and pop above the trees, they encounter thick, hard ice that requires crampons and an ice ax for safe travel. As soon as you encounter conditions where your traction no longer feels as if it’s doing its job and providing that safe grip, then it’s a good spot to turn around.”


Sometimes, with the early dark of winter, there simply isn’t enough time in the day. “A big consideration for winter travel is the limited amount of daylight, as well as terrain that lends itself to slower paces,” Davenport says. “Plan accordingly, start as early as possible, and give yourself a specific turnaround time. Those trails you love in the summer might not be doable on a winter day.”

Andrew Vietze is a freelance writer, a Maine Guide, a Baxter State Park ranger, and the author of several books, including AMC's Essential Guide to Winter Recreation.