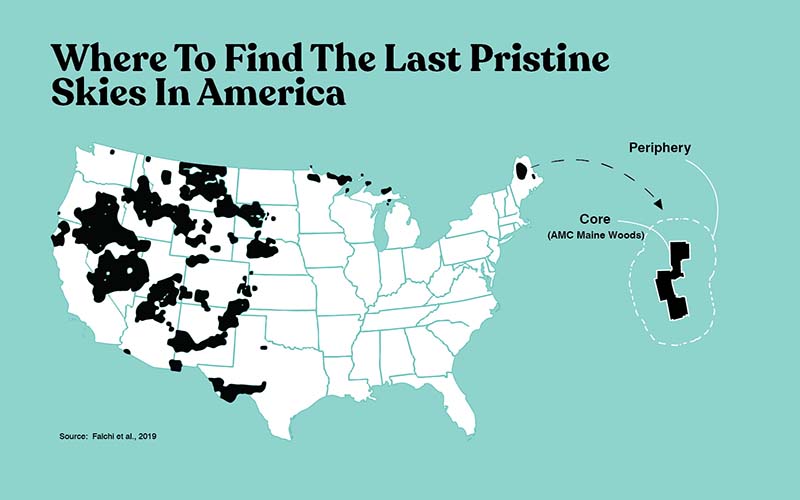 AMC’s Maine Woods holds a unique role in the preservation of night sky—nestled within a more secluded part of northern Maine, it’s in the heart of one of few remaining dark skies in the Eastern United States.

“A dark sky is one where artificial light doesn’t interfere with the view of the natural starry environment. Very few locations on Earth still have naturally dark skies; most are polluted to one degree or another,” explains Doug Arion, Professor of Physics and Astronomy at Carthage College and Director of Mountains of Stars with AMC.

Partnering with the Piscataquis County Economic Development Council, AMC is now working to achieve International Dark-Sky Association (IDA) Reserve status in the Maine Woods, which would protect this region from light pollution and seek to attract astronomy lovers from around the world. If the designation is granted, AMC’s Maine Woods would be one of 16 other Dark Sky Reserves in the world, and only the second in the United States.

The IDA started its International Dark Sky Places program in 2001 as a way to soften light pollution in remote areas. Any viable communities, parks, or preservation areas, public or private, can apply for one of six designation tiers, all which come with a number of requirements that would mitigate excessive use of artificial light and educate the public about the importance of dark skies.

“There’s different designations to elevate the importance of dark skies on the flora and fauna of a region, plus benefits to human health,” explains Jenny Ward, AMC Maine business and community relations manager. “What’s intriguing about [a Dark Sky designation] is that when you take away the light pollution, the natural resource you’re trying to conserve is immediately there. Some conservation projects take years to show results, but this is immediate.”

Preserving the night sky has proven benefits to the environment, improving wildlife habitats and reducing the deaths of migrating birds.

“Over 1 billion birds die each year migrating, most because they either get drawn into the lights of cities or lose their ability to navigate and go off course,” says Arion.

The list goes on. Arion says that insect pollination—critical for life dependent on the plants, including our food sources—decreases as much as 62 percent in light-polluted areas. Light pollution affects humans as well. Sleeping in light-polluted environments can result in reduced production of natural melatonin—a primary cancer-fighting chemical in the body—and poor sleep which can lead to higher rates of obesity and diabetes.

“Maine’s governor [Janet Mills] is pushing for rural areas to use their natural resources in wise ways to elevate the economy,” Ward explains. “How perfect is this project; we’re using the natural resources of the night sky to draw people to the area.”

IDA requires Reserve status applicants to establish a “core” area of a designated size to remain dark—in AMC’s case, this core is its roughly 76,000 acres in the Maine Woods—plus a populated periphery that extends the area to 700 square kilometers, or 173,000 acres, and enact lighting policies to protect the darkness of that core.

In May 2020, nearby Katahdin Woods and Water National Monument was designated an IDA Sanctuary, meaning it is situated in a remote enough place where there are already few threats to the preservation of the night sky. Other designations, like IDA Park or Community, have less requirements to fulfill.

“AMC could easily become a dark sky community or park, which are lower IDA designations,” Ward says. “AMC is an important resource for Piscataquis County, so we were looking at the designation from a higher level to promote the entire region.”

This means AMC and partners need to convince towns in that “peripheral” zone to support a change in lighting infrastructure. This could be as simple as installing warmer fixtures in outdoor lighting, shifting the direction of the lighting to shine down versus up into the night sky, or installing timers on lights so they are only used when needed. Currently, AMC is working to secure funding to help communities fix their lighting infrastructure. Once that change is made, then AMC can apply for the designation.

“The response we’ve had so far is favorable, since for most communities it will save them money,” Ward says.

IDA Reserve designation also requires landowners to educate the public about the importance of a natural night sky. AMC already offers astronomy programs at all three Maine Lodges and at the Highland Center and Pinkham Notch Visitor Center in New Hampshire. Year-round, guests can use the lodges’ telescopes and other astronomy equipment and resources to observe the night sky. Once the IDA Reserve status is granted, AMC plans to bring more programming to the Maine Woods.

“Our programming goal has always been what I call environmental awareness from a cosmic perspective, where we use astronomy to engage the public in broader understanding of the environment and where we fit in—and thus to change attitudes and actions,” Arion says. “Light pollution is a major conservation and environmental issue, so addressing it is a perfect fit for the AMC, and an IDSR is just one step in putting it front-and-center with the public.”