Heat Output of Alcohol vs. White Gas vs. Canister Stoves

Did you know that alcohol stoves produce only half the heat of white gas or a propane/butane canister stove? Here are the details, plus some thoughts on when the weight/heat ratio tips in favor of a canister stove.

As I’ve written about before, alcohol stoves are an incredibly lightweight and compact option for cooking in the backcountry. But one of the big sacrifices you have to make is longer cooking times, which is directly related to the amount of heat that alcohol stoves generate.

Heat Output of Different Stove Fuels
Denatured alcohol for use in cookstoves contains a mix of methanol and ethanol, which have different heat outputs.

The exact ratio between the two varies substantially by product—you’ll need to do some research to figure out which ones offer higher ratios of ethanol. (Zen and the Art of the Alcohol Stove is a great place to start.)

Canister stoves contain a mix of propane and butane. (You can learn more in this previous post: How Canister Stoves Work: The Science Behind the Fuel.) 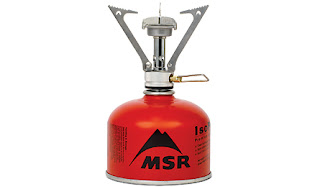 When Is a Canister Stove a Lighter Option?
For short trips, an alcohol stove cook system will be hands down the lightest weight option, thanks to the incredibly light weight of alcohol stoves. But on longer trips, you’ll need to carry more alcohol fuel than you would propane/butane fuel. So even though the stove system (burner and metal canister weight) might be heavier, at a certain point a canister stove/fuel combination will be a lighter weight option than an alcohol stove/fuel system.

There’s a great analysis of this question (plus lots of other good stove info) here, but the upshot from the post is this: If you’re going to be cooking more than 10 meals in the backcountry, a lightweight canister stove system will be lighter overall than an alcohol stove system. (This assumes 1 ounce of alcohol per meal, which is generally sufficient for 1 to 2 people.)