Picaridin vs. DEET: What Readers Have to Say About No-See-Ums, Sand Flies, and Black Flies 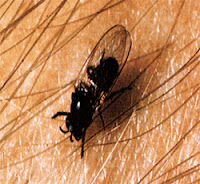 DEET and picaridin are both effective mosquito repellents. As I detailed in Picaridin vs. DEET, several scientific studies have demonstrated their efficacy against this most common insect bane. However, little to no studies have been done comparing the effectiveness of the two repellents on other biting insect pests, including black flies, no-see-ums, sand flies, and a host of other inconvenient insects around the world.

More than 20 people have commented on the initial Picaridin vs. DEET post over the past three-plus years. Many have shared some great anecdotal experiences with these other insects. Here are some of the potentially useful insights I drew from these comments:

Picaridin Works
There’s little debate on this point these days. Several readers further confirmed it, including Sdavis (Sawyer 20% “works for us, Thank God.”) and Eric, who uses Cutter 7% and 15% and says “we’ve always had excellent results.”

Choose Picaridin Concentrations of 15 to 20%
Several readers commented on this aspect. Twilight says “I love it, but anything less than 15% is not that effective in super mosquito-y areas of the Bahamas, Costa Rica, the Adirondacks, and Michigan.” Olde Hog reports “…we have Mangroves surrounding us in Florida, no-see-ums (sand flies) ruin nearly every outdoor activity. Sawyers 20% is the only product I’ve found that totally eliminates bites from no-see-ums.”

Picaridin Beats DEET in the Amazon
Aidan offered a field report from a trip to the Peruvian Amazon, where he “found Picardin to be as effective as Deet against mosquitos (although I’m uncertain whether the protection time was as long), but I found that those of us wearing picardin did distinctly better than those wearing DEET against the blackflies (no-seeums) that surround you as soon as a boat slows/stops.”

Beware New Zealand’s Sand Flies
Steve Hoge reports that picardin worked well against mosquitoes in California, but “on a trip to New Zealand we found it had absolutely NO effectiveness against the infamous Kiwi sand flies. BEWARE!” Having experienced these nightmarish flies myself—which proved impervious to DEET as well—I’m not too surprised.

What About Black Flies?
Black flies are a major inconvenience in the Northeast, especially in the early summer. So how do DEET and picaridin stack up against this blood-lapping menace? It’s unclear. No studies that I’m aware of have specifically looked at this, and I’ve heard a variety of conflicting first-hand reports. If you have any feedback on this, please share it here!