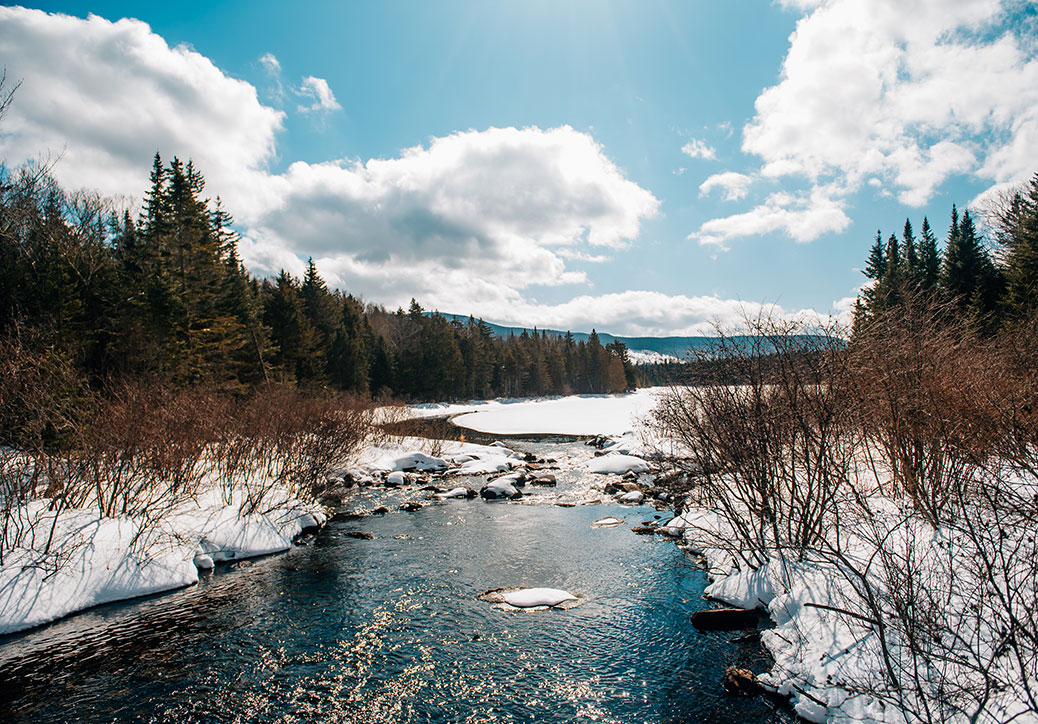 CAIT BOURGAULTMuch more than a year-round playground for outdoor enthusiasts, Maine’s 100-Mile Wilderness—where AMC has protected more than 75,000 acres of forest—is a model for land conservation and carbon storage.

Each year, Acadia National Park welcomes more than 2 million visitors to the scenic coast of Maine. At the same time, local parks in cities like Boston, New York, and Philadelphia welcome thousands of residents each day for outdoor rest and recreation. In recent years, humans have also come to appreciate how forests, parkland, wetlands, and even farms play an important role in storing carbon and slowing climate change. In fact, the forests, farms and wetlands of the Eastern United States store more than 300 million tons of carbon—equal to taking 217 million cars off the road for one year.

All of it requires land—land that someone, at some point,  protected from development and set aside for our responsible enjoyment.

Land conservation in the Northeast and Mid-Atlantic is central to the lives and livelihoods of the people in the region. It offers benefits ranging from the protection of endangered species to outdoor recreation opportunities.

The Appalachian Mountain Club has long been a leader in successfully advocating for land conservation. From early wins at the turn of the 20th century to the ongoing effort to curb overdevelopment and preserve mountain views, land conservation holds a central place in AMC’s mission. 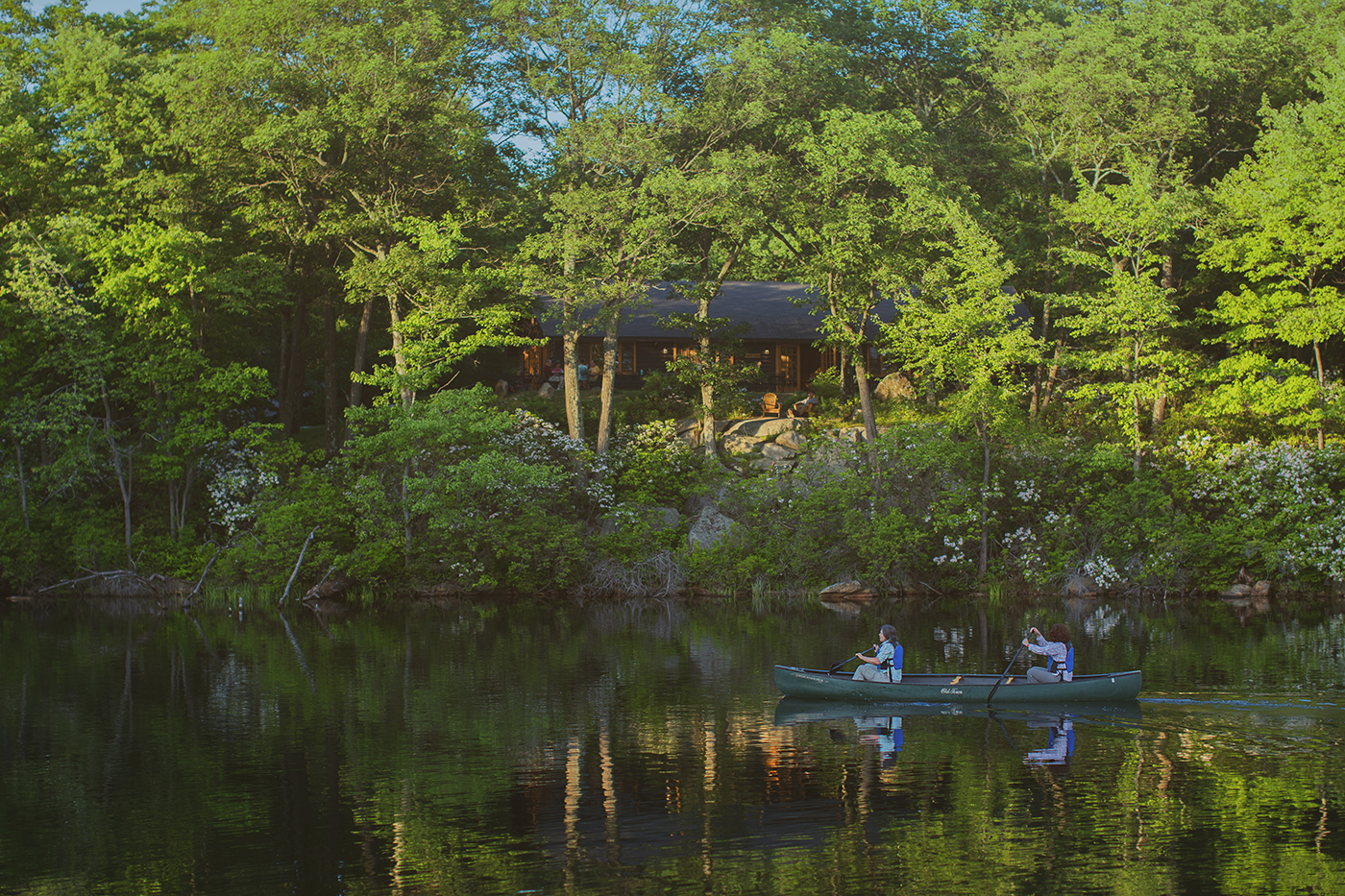 PAULA CHAMPAGNEVisitors to the Stephen and Betsy Corman AMC Harriman Outdoor Center in New York enjoy a quiet paddle on Breakneck Pond, an area protected by the Highlands Conservation Act.

A Legacy of Conservation and Advocacy

AMC’s conservation focus started out of a desire for access to outdoor spaces for recreation. Before there were public lands, AMC hikers noticed that many areas in the Northeast were being exploited and degraded by logging and resource extraction, says Mark Zakutansky, AMC’s director of conservation policy engagement. From that point, AMC has been at the forefront of every major land debate in the Northeast for almost our entire 145-year history.

In the late 19th century, AMC was instrumental in setting aside the land that would become the expansive Blue Hills and Middlesex Fells reservations, which now feature miles of recreational trails 15 minutes to the south and north, respectively, of downtown Boston. One of AMC’s biggest early legislative victories was the passage of the Weeks Act in 1911, which established a truly national Forest Service and allowed federal funds to be spent on purchasing forests for conservation. For AMC, this meant establishing a greater presence in New Hampshire’s White Mountains, which were now protected from unregulated logging and other abuses. But this early win—achieved before AMC had paid staff or policy professionals—represents only a fraction of the land since conserved through AMC’s efforts. Today, the Forest Service manages a total of 193 million acres—an area greater than the state of Texas.

“Big public lands issues have always been core to our mission, even if they were not specifically in our geography,” Zakutansky says

In the early 2000s, AMC’s leadership on the  Highlands Conservation Act  brought yet another victory for public lands advocates, creating grants for land and natural resource conservation from Connecticut to Pennsylvania. Since its authorization in 2004, the program has helped protect more than 11,000 acres in the Mid-Atlantic Highlands—equal to more than 7,000 football fields.

AMC made the leap to direct land management in 2003, when we purchased our first tract of land in Maine’s remote 100-Mile Wilderness. AMC’s Maine Woods Initiative protects and enhances one of the last undeveloped forests in the continental United States, and through a multi-use land management model, we keep the area available for recreation and responsible forestry. AMC continues to grow our work in the Maine Woods, and we’re currently raising funds to purchase Pleasant River Headwaters Forest, which would protect another 26,740 acres of forest near the northernmost end of the Appalachian Trail that holds critical habitats for endangered species. 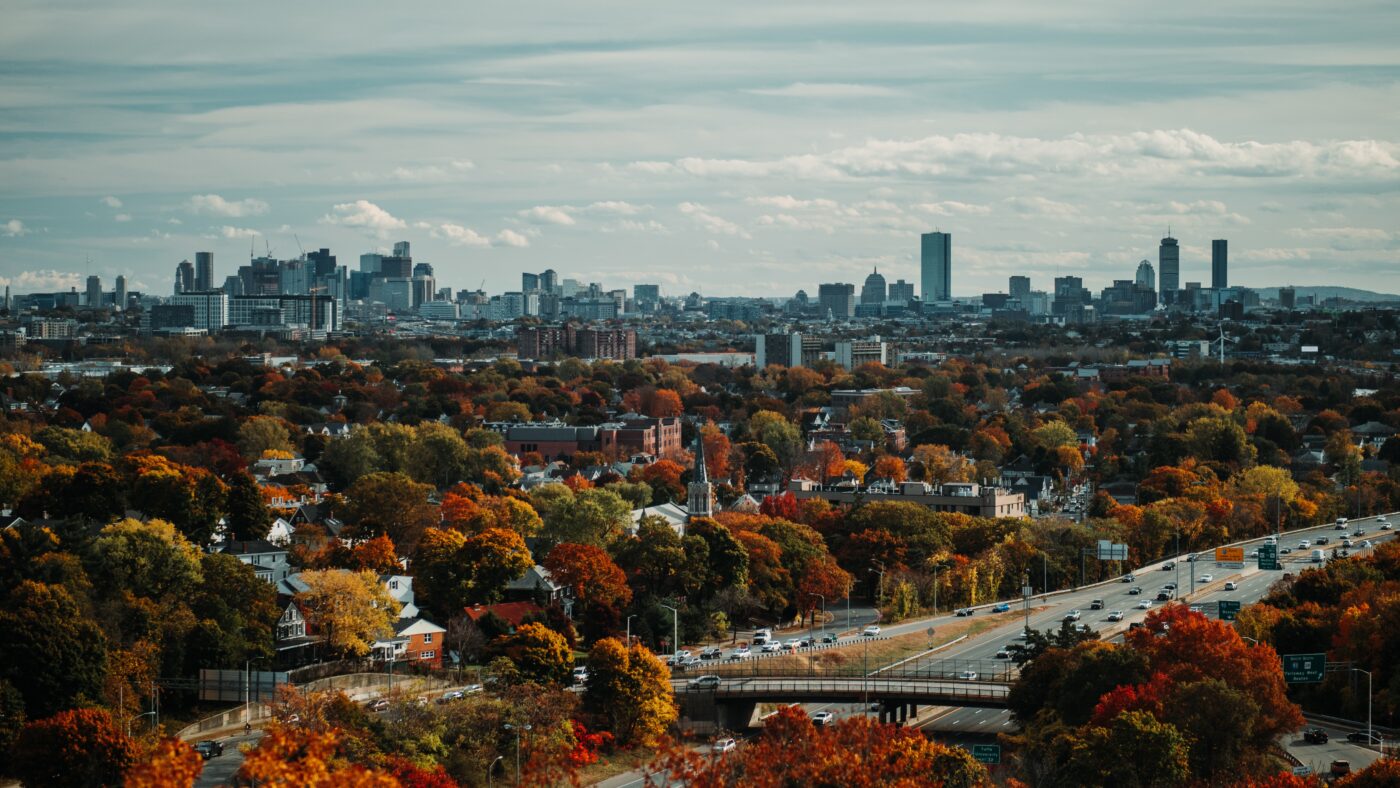 Mark Olsen/UnsplashThe view of Boston from the Middlesex Fells Reservation, one of the first tracts of land AMC worked to protect. The Fells has become a beloved natural oasis amidst the hubbub of suburban and urban life.

The legacy of conservation and stewardship that previous generations of AMC members created has helped shape the undeveloped lands of the region for over a century. But in recent years, AMC’s work has brought the outdoors even closer to home.

After all, AMC’s mission has never been just about protecting the land—at our core, we’re also about encouraging responsible, fun recreation on the land. As AMC conserves more land, equitable access to those outdoor spaces has become a greater focus for our advocacy.

For decades, AMC has pushed to keep costs for recreation on public lands fair and manageable so people from all socioeconomic backgrounds can enjoy the outdoors. More recently, AMC has advocated for programs that improve access to the outdoors, such as funding opportunities for recreation close to cities and better transit to help people get to those places.

Even as scientific research demonstrates the ways access to outdoor recreation helps both mental and physical health, research from The Center for American Progress reveals a stark “nature gap,” wherein urban Black, Latino, and low-income communities enjoy fewer parks, pools, and green spaces in their neighborhoods than wealthier, whiter communities.

In August 2020, the Great American Outdoors Act guaranteed full, permanent funding for the Land and Water Conservation Fund (LWCF), which provides grants that fund conservation projects throughout the country. While AMC has been a long-time advocate for LWCF, it has now evolved its focus to assure the LWCF funds support programs that could close this nature gap, for example the Outdoor Recreation Legacy Partnership, which helps underserved communities build green spaces in their neighborhoods.

Another way AMC is addressing equal access to the outdoors is through the Transit to Trails Act—an AMC-supported bill pending in Congress that would create a grant program to fund more accessible transportation to green spaces and public lands in underserved communities. 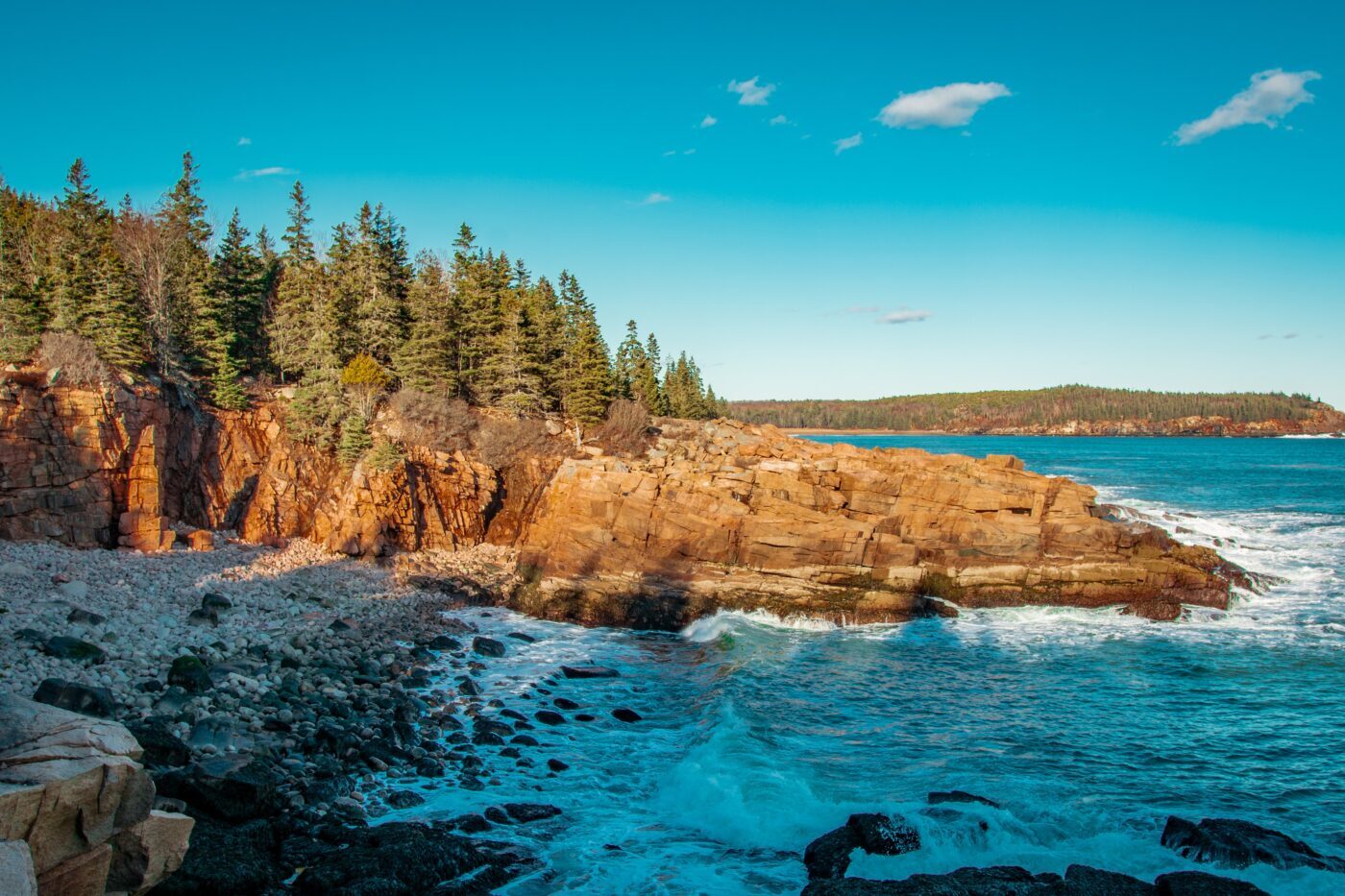 Land for the Planet

The most ambitious conservation challenge may still lie ahead. This spring, the Biden Administration announced its “America the Beautiful” Initiative, a comprehensive program which would partner with private landowners and conservation organizations like AMC to permanently protect 30 percent of America’s land by 2030.

Scientists say that long term, we’ll ultimately need to conserve half the planet’s land in order to sustain human and animal life here. Thirty percent is a big step in that direction.

Land conservation is also a key component to mitigating the worst effects of climate change. Trees sequester large amounts of carbon dioxide, preventing it from drifting into the atmosphere and contributing to the greenhouse effect. AMC is a regional leader in advocating for natural climate solutions—conservation, restoration, and improved land management actions that increase carbon storage or avoid greenhouse gas emissions in landscapes and wetlands. As extreme weather becomes more commonplace, large, protected landscapes are essential to the resilience of local species as well as to the human populations that enjoy them. Forests are particularly powerful regulators of water, filtering pollutants out of drinking water and slowing runoff into reservoirs and towns during extreme storms. Ecosystems like mangrove forests and wetlands help reduce storm surges and flooding in coastal areas.

The next decade may present still greater challenges around equity and climate change, which means land conservation will continue to play a central role in the health, safety, and happiness of communities throughout the Northeast. Rest assured, with your help, AMC will continue to take the fight for America’s precious lands and waters to the halls of power and the beloved mountains, valleys, and forests of the Northeast and Mid-Atlantic.