What is Air Pollution? 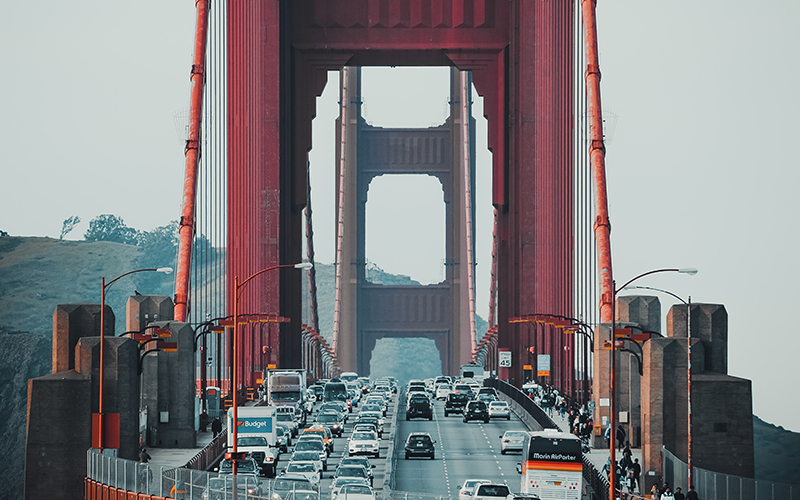 SAKETH GARUDAExhaust from cars and trucks emit harmful pollutants into the air, leading to health concerns in humans and contributing to climate change.

Released from factories, powerplants, and vehicles, toxic particles and chemicals can have detrimental effects on both human health and the environment—yet it wasn’t until 1970 that the United States started regulating how much of these pollutants can be emitted into the atmosphere. Today, scientists are still learning about the long-term effects of air pollution, but with more research they now understand more than ever the consequences of these pollutants and are working to find ways to mitigate them before it’s too late.

Air pollution is any component found in the atmosphere that negatively affects human health, the environment, or property, according to Georgia Murray, AMC staff scientist.

“Generally, burning fossil fuels and the subsequent emission from tailpipes and smokestacks are the largest sources,” Murray says. When fossil fuels are burned, they emit dangerous gasses and chemicals into the air, jeopardizing the health of humans, animals, and plants.

There’s also hazardous or toxic air pollutants, like benzene and mercury, which are either known or suspected to cause cancer in humans, according to the EPA.  More recently, scientists have learned that the manufacturing of PFAS (Polyfluoroalkyl substances) and PFOA (Perfluorooctanoic acid)—manmade chemicals used for waterproofing and non-stick cookware—can contribute to air pollution. 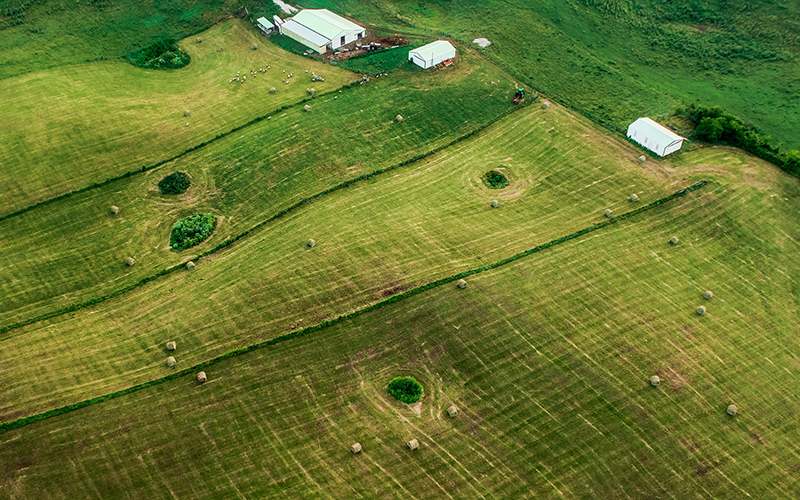 DAVID BARAJASAgriculture, including everything from overuse of fertilizer on farms, to raising livestock, is a leading contributor to air pollution.

Human activity is the main culprit of air pollution, Murray says, but that generalization encompasses everything from agriculture, to land use, to the burning of fossil fuels. According to the EPA,  “stationary or group of stationary sources”— factories, powerplants, or industrial facilities like manufacturing plants, coal mines, or oil refineries—account for most air pollution today. These sources emit or have the potential to emit 10 tons per year of one type of hazardous air pollutant, or 25 tons per year or more of a combination of hazardous air pollutants.

One of the largest contributors is agriculture, where everything from the use of nitrogen-rich fertilizers on farms to the raising of livestock emits dangerous chemicals into the atmosphere. According to The Earth Institute at Columbia University, fertilizer and livestock waste emit ammonia, which then combines with the nitrogen oxides and sulfates from vehicles and powerplants to create aerosols, tiny particles that may cause heart or pulmonary disease in humans. There’s also methane, which is mostly released from cows’ digestive systems. Once in the air, methane absorbs the sun’s heat and warms the atmosphere, contributing to climate change.

Emissions from motor vehicles are another major source of air pollution and may be particularly problematic in dense cities where residents rely on their own cars for transportation over public transit. Some automobile emissions also travel long distances from urban centers to the White Mountains, creating smog on Mount Washington, for instance.

There are natural causes of air pollution as well, mainly in the form of particulate matter as dust, sand, pollen, fungus, or bacteria is dispersed in local regions, however human contributions still outweigh these natural causes, Murray says.

How is air pollution hazardous to human health?

Short- and long-term exposure to air pollutants may have detrimental and life threatening effects on humans, including asthma and other respiratory conditions, stroke, heart disease, and lung cancer, according to the World Health Organization. Ozone—which is a gas made up of three oxygen atoms that when high in the atmosphere protects the Earth from the sun’s rays, but closer to the ground is dangerous to humans, animals, and plants—and fine particles can pass through human lungs and into the blood stream, bringing with them toxic compounds and cause asthma, chronic obstructive pulmonary disease (COPD), and other respiratory complications.

Plants and animals are also affected by ozone, nitrogen, sulfur, acidity, mercury, and other pollutants, Murray says. Ozone can affect vegetation by oxidizing (or burning) the plants during respiration, lessening their chance for survival and over time affect the health of a forest. Overexposure to mercury, which typically happens from eating seafood with high concentrations, can lead to neurological damage, heart complications, and weakened immune systems in wildlife and birds. 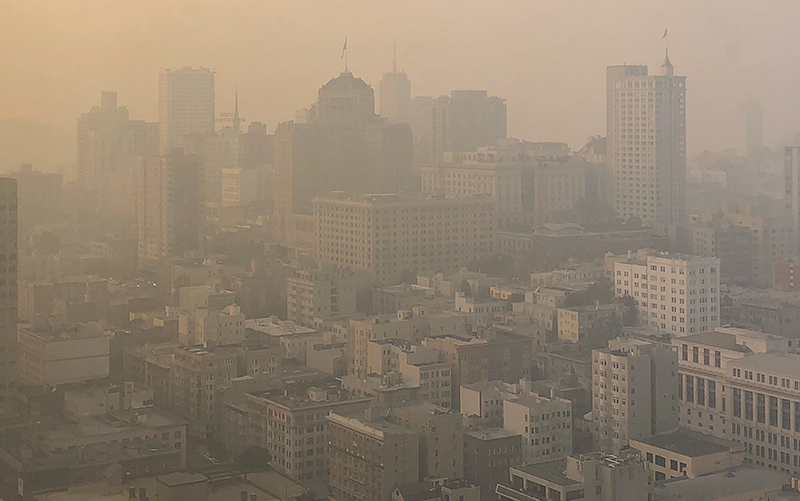 How is air pollution hazardous to the environment?

Human-caused air pollution can both warm and cool the planet, but the balance is heavier toward warming pollutants, Murray says. Certain air pollutants, including carbon dioxide, methane, nitrous oxide, ozone, fluorinated gases, and water vapor, are considered greenhouse gases that trap heat in the lower atmosphere and contribute to climate change.

“The greenhouse effect allows us to live on Earth, but air pollution has amplified it to an unhealthy rapid rate,” Murray says. “Carbon dioxide stays in the atmosphere a long time while methane and ozone are relatively short-lived.”

The EPA measures the impacts of greenhouse gasses through the Global Warming Potential (GWP), which calculates the amount of energy one ton of each gas can absorb, relative to one ton of carbon dioxide. The higher the GWP, the more it warms the Earth.

Other contributors to climate change include sulfate and nitrate aerosols, released from burning fossil fuels and suspended in the air, which absorb and reflect heat and can have a cooling effect. Black carbon, or soot, when deposited on surfaces can cause it to heat up faster as well, Murray says.

Acid rain, produced when burning fossil fuels like coal and oil emit sulfur dioxide and nitrous oxides into the atmosphere, mixes with moisture to form sulfuric and nitric acids. Once the acidic rain (or snow) reaches an ecosystem, it can have detrimental effects on waterways, plants, and wildlife. Acid rain causes the soil to lose essential nutrients like calcium that plants need to grow.  It also can cause the release of more aluminum, which is toxic to roots and fish,  and in waterways high acidity can prevent fish eggs from hatching or even kill mature fish. AMC has taken particular interest in researching acid rain, measuring levels in cloud water passing by the Lakes of the Clouds Hut since 1984.

How is the U.S. regulating air pollution?

The Clean Air Act, passed in 1970, is a main line of defense against the emissions of hazardous air pollutants. By establishing emission standards, the United States is able to limit the amount of harmful pollutants released into the atmosphere by factories, power plants, cars, and other common culprits.

In addition to standards that control the level of emissions, each of the “criteria air pollutants” have an air quality standard that sets the allowable limit that can be in the air. These health and ecosystems standards are scheduled to be reevaluated every five years by the EPA. If the EPA determines risks persist based on the current air quality standards, they will then revise those standards to be more stringent.

On the state level, the EPA requires each state submit an Ambient Air Quality Monitoring Network and Annual Plan each year, which measures how much of the six “criteria air pollutants” are present and if it meets EPA air quality standards. This report also requires states to detail plans on how they can reduce emissions if they are exceeding the health and ecosystems standards.

Unfortunately, planning, monitoring, and meeting emission standards doesn’t always mean change. In fact, the EPA and other federal agencies have rolled back more than 100 environmental rules since 2017, among them key air pollution standards. This includes reversing a rule that requires oil and gas companies to submit plans to prevent leaking methane into the atmosphere, reducing the annual emissions cuts to new cars and trucks, and maintaining the current air quality standards for particulate matter and ozone instead of making them more protective of our health and environment. 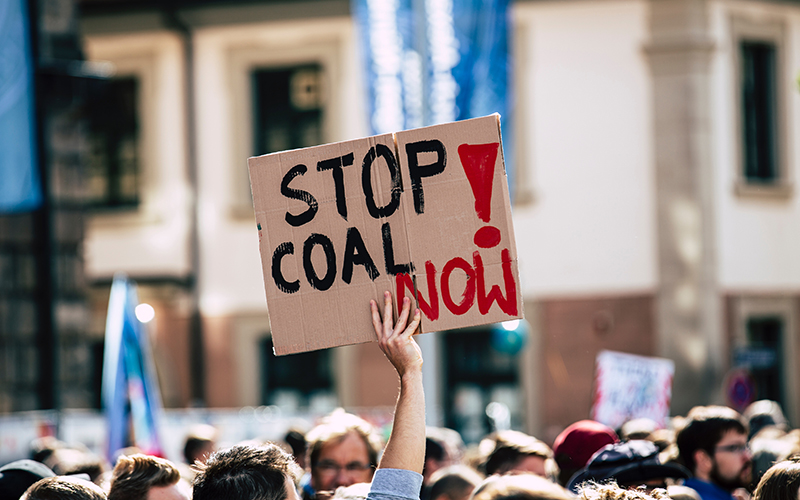 MARKUS SPISKEBy limiting the burning of fossil fuels for energy, and instead choosing renewable sources, we can lessen the emission of pollutants into the air.

First, companies should find ways to conserve energy and be more efficient, Murray says. This includes switching to distributed local power sources like rooftop solar, which reduces the need to generate, store, and move energy and reduces large scale energy production. AMC promotes supporting environmentally balanced clean energy, meaning that the production and transmission of energy, even clean energy, should not disturb undeveloped land that are essential to ecological protection and outdoor recreation.

Another way for a company or organization to help reduce air pollution is by conducting a carbon footprint analysis to identify where it’s contributing the most to air pollution and making any necessary adjustments. 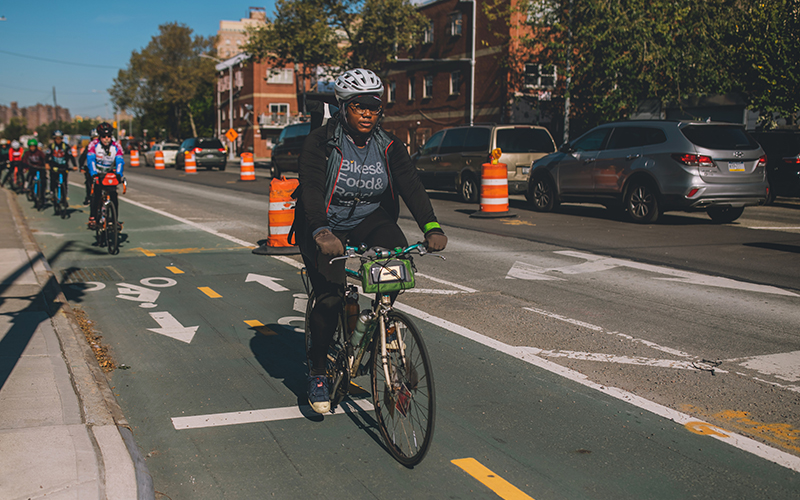 PAULA CHAMPAGNEOne way to lessen your personal impact on the atmosphere is to walk or bike to work instead of driving your car.

How can individuals help?

While the major producers of air pollution are factories that burn fossil fuels, individuals can mitigate their own emissions. An easy way to start is by minimizing the need to drive a car, whether by walking or biking to work, or taking public transportation when possible. Need an example? When the outbreak of COVID-19 caused countries around the world to shut down in March 2020, the sudden decrease in car and plane travel proved beneficial for air quality, reducing carbon dioxide emissions by 17 percent, and nitrogen dioxide by 30 percent.

Traveling less in general, whether by car or plane, helps reduce our personal carbon footprint, while buying local food can help reduce the emissions used to transport food from farm to table. Murray also recommends conserving energy by switching to clean energy sources, cars, and appliances, and addressing the food waste you produce and try to limit it.

As citizens, we can keep supporting the proven policies like the Clean Air Act too. Murray points individuals and families toward AMC’s Conservation Action Network as a general source of policy information and a list of opportunities to comment on potential changes to environmental laws or standards.

“We have made great progress cleaning up air pollution with the [Clean Air Act], so we know it works and that the benefits far outweigh the costs,” Murray says. “As we learn more about the dangers of climate change and the need for stronger air quality standards we should let EPA know we want these protections and they should not be rolling back this proven and effective tool.”